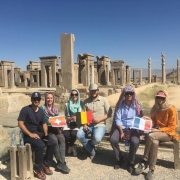 Since the Islamic Revolution of 1979, Iran has been a no-go area for most tourists. Even today, moral enforcers are watching the streets of Teheran checking the inhabitants’ behavior. But recently, increasingly large amounts of foreign tourists have arrived to the country.

There has been a full-fledged hype around Iran-tourism since 2013 – which has been validated by multiple travel companies. Demand has been so high that additional programs had to be set in place. Gebeco, a large tour operator for study- and experience-traveling, talks about a „large boom” in Iran-tourism since 2013. Almost all study tours for Spring 2016 are already booked out. Gebeco stated that their revenue from trips to Iran have doubled once more. Iran has become a trend destination.

Other tour operators are experiencing similar growth as well. Study tour operator Studiosus confirms. While there were roughly 500 bookings in 2013, the number of trips to the Islamic Republic increased to 2700 in 2015. “With no evidence of stopping anytime soon,” according to Studiosus-spokesman Frano Ilic. According to the statements made by the travel company, Iran is their currently most popular long distance travel destination. Despite this high number of bookings, the country however is far from populated by tourists – there is no mass tourism in sight.

Guided group tours around Iran have the benefit that guides can explain and remind you of the rules of Sharia. In practice, this means that women need to dress appropriately and wear a headscarf, men need to dress conservatively as well. Furthermore, there is a strict ban on alcohol and sexual contact outside of marriage. Tourists need to be aware of all of this when they visit Iran. Single travelers need to be especially careful since they are solely responsible for their own safety.

Especially those interested in culture will find Iran to be an exciting travel destination. However, one should be clear that Sharia laws very much shape the travelers’ experience. Iran is still a place that requires a certain amount of caution. Speaking your mind about current political developments can bring your trip to a bad and premature end – and you could get into police custody sooner than you would think, which is especially hard to get out of. Despite lots of improvements, Iran is still a country where tourists should take care to avoid any unwanted trouble.

Mesr Desert
Scroll to top
Need Help? Chat with us
Start a Conversation
Hi! Click one of our member below to chat on Whatsapp
The team typically replies in a few minutes.
farzaneh
Incoming Department