This cave is one of the most beautiful caves in Iran, located near Tehran.To reach the main door of the cave,Some hiking and walking are necessary.The walking path inside the cave is about 1000 meters.Along this path, you can see the beautiful natural scenery of the rocks and anticlines and caves formed in the cave.
The evidences obtained in this cave, such as pottery or rock tools, represent the lives of humans thousands of years ago.

This cave is located in the village of Rood Afshan Damavand and in the central Alborz mountains.The entrance to this cave is the third largest crater in Iran’s caves.The main hall of this cave is so big that it is possible to create a great amphitheater!
This cute cave has 3 main and secondary courtyards with beautiful natural scenery.

In the event that you travel from Isfahan to Tehran or the other way around, on your way close Dilijan, Delijanone of the great wonders of the world calls you toward itself. Amongst NarDilijan Town, appropriate in a place where depleting summer warmth of Heram Village, on the off chance that you venture inside a multi-million years of age, give in, Chal-Nakhjir Cave, notwithstanding for a few minutes, it is as though you venture in another season. It is correct, Chal-Nakhjir or Nakhcheer Cave is one of the marvels of creation that unexpected each person. This live regular multi-million years of age phenomenon was found amid investigations of Regional Water Organization of Dilijan District, at that point after reproduction of passage and inside lighting and building stairs to get to the give in, this place turned into a vacation destination that draws in loads of sightseers and guests.

Truth be told, the primary structure of the give in is fundamentally the same as Ali-Sadr Cave in Hamedan City and Province, and the main distinction is their shape and inside surface, not their materials. On one hand, Ali-Sadr Cave has consistent water and to visit the surrender, guests need to utilize vessels, while, 15 degree it is not valid about Chal-Nakhjir Cave. Guests in Chal-Nakhjir Cave can walk effortlessly inside and appreciate watching its marvels.

The temperature on Chal-Nakhjir Cave is aro15-degree centigrade. Inside lighting, intriguing gems and limestone of the surrender ponder each guest. The dynamicity of the give in is the end goal that is like clockwork 3cm are add to its lime precious stones. Therefore, Chal-Nakhjir Cave is viewed as alive among geologists. Recreation of this marvel and introducing twisting stairs through its way encourage going to 1200 meters of the surrender for guests. Calcareous surface, stalactites, wipe calcites, coral gardens, various passageways, and lakes are different marvels of this stunning wonder and every one of them make many astounding shapes, for example, blessed messenger’s wing, horsehead, Chehel Cheragh (hallway of numerous lights), Macaroni, and footballers. Because of the absence of light and nourishment, there is no live being inside the give in. Normal inward air ventilation amid summer and winter is another ponder of such astounding hollow; subsequently, the buckle is cool amid summer and it is warm amid winter, and furthermore, guests never confront absence of oxygen amid their visit.

In 2002, the buckle has been enrolled in National Heritage Organization of Iran, and by endeavors of Cultural Heritage and Tourism Organization of Markazi Province, intriguing minutes are given for guests brief offices and shocking perspectives. It is worth to say that keeping in mind the end goal to secure and protect such great common marvel, conveying any versatile gadgets, for example, sack, knapsack,camera, foodstuffs, and so forth are averted. It is exceptionally prescribed to visit this awesome place particularly to the individuals who are keen on eco-tourism. 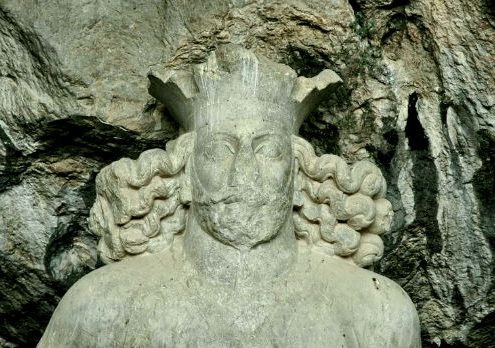 This cave is located on the heights overlooking Chogan Valley, about 6 km from the ancient city of Bishapur in the south of Iran. Shiraz is one of the cities from where you can start your trip to get there.

Now imagine you’re up there. What appears in front of your eyes is a huge statue standing in front of you not far ahead. He’s Shapur I, the second king of the Sassanid Empire. Yes, it’s really surprising to see such a huge statue in a cave at the top of a mountain. But it’s not the only thing that can surprise you.

Sculptures and rock reliefs have formed an outstanding part of Sassanid art. Although such carvings benefited less popularity at those times as compared to the other ancient periods, they’ve done the best in depicting some significant figures and events.

What You Need to Get to Shapur Cave 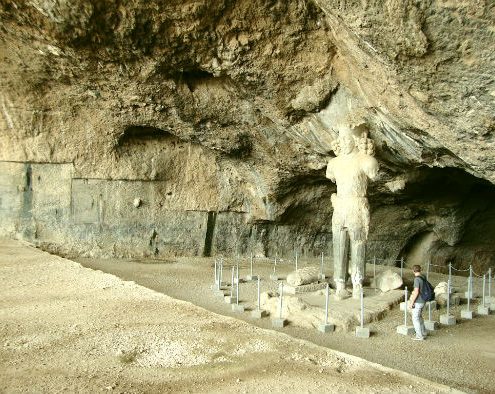 So, to see the real surprise, you have to reach a cave which is located at a height of about 800 meters above the mountain foot. The entrance of the cave is about 30 meters wide and 15 meters high, and its length is about 450 meters from the entrance to the end. It’s called Shapur cave because the enormous statue of Shapur I is there.

Yes, this remarkable manifestation of Sassanid art is so impressive. The height of this statue is about 7 meters and the shoulders are more than 2 meters wide. It’s carved out of a stalagmite in this limestone cave and dates back to about 17 centuries ago. It’s the only sculpture this large remaining from the ancient times in Iran.

Shapur I was one of the most powerful Persian kings who achieved great victories against the Romans. In his last war with the Romans in early 260 A.D., he arrested the Roman Emperor and imprisoned him in the ancient city of Bishapur, 6 km from the cave, and therefore, the Roman Empire was dominated for a long time. This victory attracted attention of the civilized world of the day to the power of the Sassanid Empire.

Other Attractions in and around Shapur Cave

It’s said that the dead body of Shapur I is buried somewhere in this cave. There is also another legend narrated by the locals about this issue. It says that Shapur, being defeated in a war, took refuge in this cave. Since then he has been disappeared and his body has never been found.

These are not the only wonderful attractions in the region. You can take a tour to visit the other ancient spots near Shapur cave. Among them all, I suggest visiting the ancient city of Bishapur and Chogan Valley rock-reliefs. There you can learn much more about Sassanid art and get hugely surprised, too.