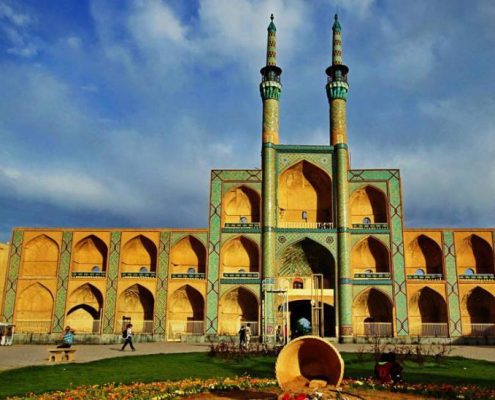 Marco Polo described Yazd as “a good and noble city” with “a great amount of trade”. This noble city now stands a chance to become another UNESCO cultural and architectural site in Iran.

THE 40th UNESCO World Heritage Committee begins to review 34 global nominations in Krakow, Poland, including Iran’s candidate, the historical texture of Yazd. The 21 members of the committee are to discuss the tentative list from all corners of the world in 10 days to reach a verdict which to some are really important such as the Fort and Shalamar Gardens in Lahore, Pakistan, Historic Centre of Vienna, Austria, Cerrado ecoregion in Brazil.

It has been 9 years since the registration of Historic city of Yazd in the tentative list; however, due to several ill-matched and uncommon constructions which unbalance the historical texture of Yazd, it is still on a lengthy waiting list of Iran. The UNESCO International Council on Monuments and Sites (ICOMOS) finds a number of defects in the texture of the city which look somewhat incongruous to the homogeneous clay structure of the area. According to the World Heritage Site website “The historical structure of Yazd is a collection of public-religious architecture in a very large scope comprising of different Islamic architectural elements of different periods in a harmonious combination with climatic conditions.”

For the past two years, Iranian officials of the Cultural Heritage Organization cooperating with the locals and authorities of Yazd by arranging and conducting workshops and meetings, has been doing its best to pave the way for the 22nd UNESCO World Heritage Site in Iran and today finally Yazd joined in the World Heritage List of Iran.

Ateshooni (Maziyar)Yazd engraved as UNESCO heritage site
Scroll to top
Need Help? Chat with us
Start a Conversation
Hi! Click one of our member below to chat on Whatsapp
The team typically replies in a few minutes.
farzaneh
Incoming Department