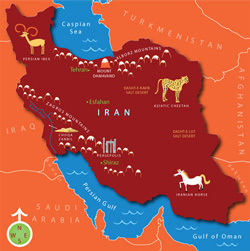 Placed on Northern hemisphere & south west of old continent, Iran on middle-east region & with 1648195 km2 area, is the world eighteenth vast
country.
This country with the total 5440 km land border, is in South neighborhood of countries of Armenia
Azerbaijan & Turkmenistan; West Of Afqanestan, & Pakistan; & East of Iraq & Turkey. Furthermore, via Persian Gulf at South, it has also marine border with Kuwait, Iraq, Saudi Arabia, Bahrain, Oman, Qatar, & United Arab Emirates; with regard to Caspian Sea coastlines, Iran has around 7680 km of marine border.
Placed on the region of middle Urasia, Iran has a strategic situation on the way of West & East, which acts like a bridge between the world biggest lake of Khazar & Persian Gulf; through which, the silk road passes(as the biggest commercial net of the world, up to Fifteen century AD). That’s why, from distant past it has been the linkage of cultural, commercial, & political Manifestations of East & West World.
In accordance with 1313  Circular, issued by Reza Shah & sent to all countries, from Farvardin 1, 1314(1935, Mars 21), the word of Iran replaced its former names of Pars & Persia, formally.
In word, Iran means Land of the Aryans; Indo European speaking emigrants which had immigrated to Iran Flat & Indian Subcontinent, during the 2nd millennium.
Nowadays, Iran encompasses various tribes like Persian language, Azari, Kurd, Lore, Baluch, Mazandarani, Gilak, Qashqai, Arab, Lak, Turkmen, Tat, & Sistani; according to 1390 Census of Iran Statistics Center of which contained the population of 75149669 people.
Tehran is, Iran Capital, biggest city & political-administrative center. This country official language is Persian, its official religion Islam, & its Time difference, based on World time clock, +3:30.


Geography
From natural view point, Iran is limited on North to Atrak River, Caspian Sea, & Aras River; on east to Hindukush Mounts & Western Mounts of Send Valley; on West to Western domains of Zagros Mountains & Arvand Roud Basin; & on South to Persian Gulf & Amman Sea.
Over half of Iran bears desert & Semi-desert Weather; around one third of which is mountain & a small part of it encompasses prolific flats of Caspian see south parts & khouzestan. Also, Damavand peak with the altitude of 5671m, is the highest spot of Iran.

Weather
In respect to Iran vastness, this country is so distinct & changeable climatically; so, according to rainfall, temperature & moisture, various parts of the country bear considerable differences.
Regarding the climate, Iran is one of the world most exclusive countries; sometimes in winter, the heat difference between the warmest & coolest spot of which is over 50 centigrade degree.
Influenced by Siberian high pressure system, Mediterranean air system & Low pressure system of south, plus the existence of mountains & seas, Iran is amongst a few countries of the world; in which four seasons are well evident.
On the other hand, due to its placement on above Latitude, the difference among its seasons are more, resulting in the variety of outstanding climate.
The northern coastlines, in summer bear a hot & wet, & in winter a mild weather. While, West & North-West regions, have mild summers & cool winters, the Southern parts, have very hot summers & mild winters; that’s why every corner of Iran, bear a different nature comparing to other zones.

Plants and animals
Based on the report of Research Institute of the country Jungles & Pastures, considering the various climate & the distinct face of Iran nature, around 10000 species of forest & pastures plants have been recognized.
Due to geographical variety, & thanks to jungles, deserts, mountains, & different rivers & lakes, Iran eco-system encompasses various animal species (1130 species); from amongst of which some rare ones are found in Iran, e.g. Lynx, Caspian tiger, Gazelle, Cheetah and Persian ibex.
Due to the four-season quality of Iran weather, this country as well as being the origin of endemic birds,   is also the passageway of migratory birds from Asia Northern parts; i.e. Russia & Siberia. The existence of two Warm sea in South & Caspian Sea in North, have caused the variety of the Aquatic.

According to the report of Energy Department of 2008, Iran contains the World 3rd oil reserves, 11% of oil field proven reserves equal to 130 Billion barrels, the 2nd Gas reserves of globe, & also 18% of gas field proven reserves equal to 26 Trillion m‎‎3; as the result of which, the main advanced industries of Iran encompasses Oil, Gas, & Petrochemical.
Also, due to the weather variety, in generating agricultural products Iran is active; in some cases of which even bears the comparative advantage. In accordance to FAO, The latest statistics from the Food and Agriculture Organization of the United Nations shows that Iran is one the biggest significant producers of World Agricultural Products. Based on this same data, for several consecutive years in producing Pistachio and mulberry has been unmatched. Also, in generating apricots, dates and most summer crops, Iran has won the world 2nd position, & in generating walnut and cherry, the 3rd one.
Also, from amongst its different traditional handicrafts like all types of carpet, & rugs, pottery, wood carving, & inlay, the hand-maid carpets, Turquoise, & Gemstone are the most key items of Iran export affairs.

18 steps to visit Iran | How to Visit IranIran History
Scroll to top
Need Help? Chat with us
Start a Conversation
Hi! Click one of our member below to chat on Whatsapp
The team typically replies in a few minutes.
farzaneh
Incoming Department