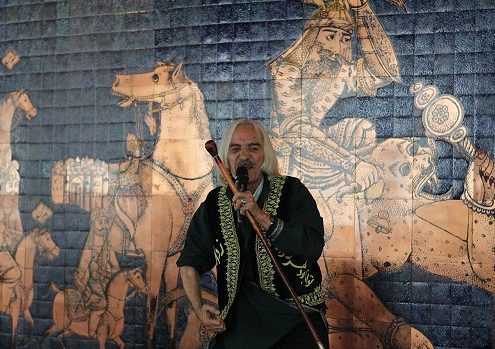 Naqqali and reciting Shahnameh has always been a common and favorite tradition among Iranians as a branch of performing arts and story-telling. Shahnameh is the world’s longest epic poem book created by a single poet, Ferdowsy, the famous Iranian poet of 10th & 11th centuries, who save the Persian language and identity by this book.

Naqqali is performed by one person. Its goal is to transfer wisdom and experience from previous generations to the present one. To join the spectators of this popular art in such circles is a special experience of an intangible cultural heritage inherited by Iranians. It’s a tourist attraction that hasn’t been tapped into yet as of this time.

Creation of Naqqali Art in Iran

It’s not clearly known when exactly this art has emerged. However, some authors have referred to it at some history books and works like Shahnameh. Some also believe it came into existence after Islam. After the arrival of Arians into the Iranian plateau, Naqqali has flourished more than before. Old stories like those of Mithra, Anahita, and Siavash indicate the age of this art registered by UNESCO as an intangible cultural heritage of Iranians.

From Naqqali to Shahnameh Recitation

It has been very common to narrate and tell stories during long nights of winter and Ramadan. Naqqals (story-tellers) used to tell the stories of Abu-Moslem, Samak-e Ayar, and Darab Nameh with poems and songs. Many literary works, like poems of Ferdowsy, Rumi, Nezami, Jami, Sa’adi and others, have become eternal with the help of Naqqqals’ restless works.

Gradually, story-tellers began narrating other sources as well. Among all such works, Shahnameh received a lot more attention than others. Narrating stories of Shahnameh was intertwined with the history of coffee shops (today’s teahouses) in Iran. Among all the other stories, the story of “Rostam and Sohrab” got the most significant status. Therefore, it got to the point that Naqqali in coffee shops is synonymous with “Killing Sohrab”.

Reciting Shahnameh is rooted in Iran’s rituals and traditions and its focal point is the mausoleum of Ferdowsy. Today Shahnameh recitation circles are formed at his burial place. Such circles attract large number of people from all over the world to the festival of performing arts of Iran, in particular, to Naqqali. 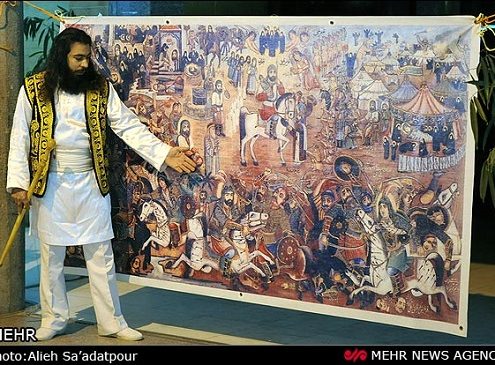 Naqqals have been the guardians of folklore, epic stories and folkloric music. They were dressed in white or navy-blue shirt, special long cloak, vest, traditional shoes (charoq) and a special dervish-style shawl (rashmah) to be present in coffee shops. Sometimes, they also put on some old hats and armored coats to narrate battle scenes and various other topics as stories.

Comparing champions’ stories with the lives of the people at the present time, kept myths and legends alive. Story-tellers tried to attract their audience to their performance by performing arts that suited their stories’ events. When it comes to Naqqals features, one can say they:

Naqqali, an Art for Women 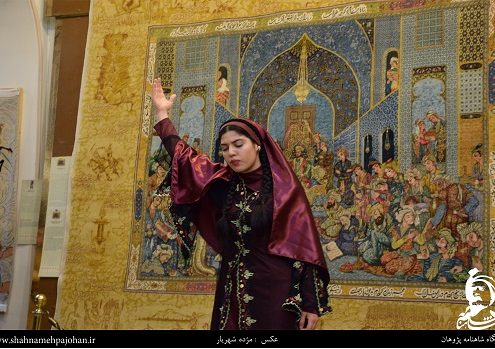 Story telling is an art and event made for women. Our childhood stories are mixed with our mothers’ voices. In other words, we’ve heard our first stories from our mothers. According to cultural and historical evidences, the first Iranian female naqqal was Shahrzad. The second one was Ferdowsy’s wife called “Bot-e Mehraban” (meaning kind idol).

Women were the earliest performers of the art of naqqali, but they lost it to men due to some social issues. Naqqali was taken to coffee shops, which culturally weren’t considered decent places for women. As women have found other places to perform, today they are some of the most outstanding Iranian Shahnameh recitation artists. As a result, they contribute largely to keep this old art alive. Such beautiful event is an important attraction that brings the art and culture fans together in Iran.

One can say Naqqali is comparable to some European arts like opera. Of course, opera is categorized as a genre of musical and theatrical performance, but one can find similarities in its style of developing stories. Like Naqqali, Opera uses musical language to narrate stories, but it’s different in performing style and the number of performers.

Just remember, when you travel to Iran, make sure you join the circles of Naqqali and Shahnameh recitation. It is performed in various places and particularly in performing arts festivals. Also, keep in mind that there are many old traditional coffee shops all across Iran beautifully decorated with scenes from old stories. Each of those places and their paintings have got some stories in them that could provide you with unique and pleasant stories.

What to Expect to Eat in Iranian Restaurants during Your Visit of IranMusic of the Bakhshis of Khorasan Registered by UNESCO
Scroll to top
Need Help? Chat with us
Start a Conversation
Hi! Click one of our member below to chat on Whatsapp
The team typically replies in a few minutes.
farzaneh
Incoming Department