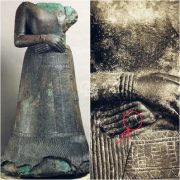 Getting the wedding ring is one of the oldest and most universal traditions.This is a very old tradition.
In fact, nobody can tell the right time about it.But the use of it, in the form of a “ring”, as the mark of perfection and its relationship with two people’s intercourse, was a sign of the perfection of human life.
According to some evidence, the first people who used the marriage ring in history were Egyptians.
In the hieroglyphic writings of Egyptian portraiture, the ring was the symbol of eternity.
The marriage ring in the finger of couples has been a kind of marital covenant that has been permanent and eternal and after the Egyptian people, Christians began to use it.

Declaring love and commitment to people through the ring had existed from years ago. As the pop star, Beyonce also pointed out in one of his songs about the use of it by men.
But according to the latest available documents, the world’s first marriage ring, back to 3260 years ago, belongs to the king of Ilam, Iran, Queen Napriasu, the wife of OnutasNaprisha!
So proudly, the marriage ring is about Iran!

The statue of Napir Asu is one of the remains of the Elamite civilization.The Queen of Napierasu was the wife of Untas Neapirisha, king of Elam.It dates back to 1250 BC.
The statue, made with a layer of copper and gold on a bronze molding, is about 130 cm high, 70 cm wide and 1750 kg Weight.

“This sculpture is the largest metalwork of the  East ancient, which is not even seen in Egypt, Babylon, and Anatolia.
This statue is not only an art piece but also a culmination in the art of bronze casting, which shows the presence of super-skilled craftsmen in the land of Elam.This statue is a very important art-work  dedicate the commemorating and honoring the Elamite emblem and in fact, show the value and credibility of the woman in the ancient Eilami civilization.”

The name of the Queen and the great gods of Susa carved into Elamite cuneiform on the boundary skirt of this statue.
There is a ring on the left hand, which is her wedding ring probably.
The statue of Napier  stores in the Louvre Museum.