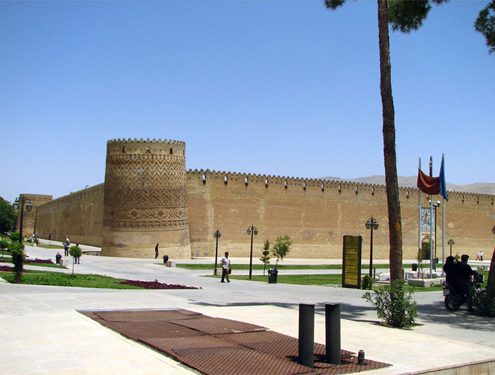 While reading and preparing to take a trip to Iran, you will easily notice there are a lot of historical sights and monuments to visit in each part of the country. Shiraz is also an ancient city with several old monuments still standing in good conditions. What you read here is an introduction to one of the most outstanding structures remained from Zand Dynasty, 2nd half of 18th century, Arg-e-Karimkhani .

This structure can be easily found at a corner of Shahrdary Sq close to Shiraz bazaar. The appearance of the building resembles a solid fortress entirely made from bricks with military as well as residential functions. The construction of Karimkhan Citadel goes back to the second half of 18th century when Karimkhan-e-Zand was ruling in Iran from Shiraz, his capital city.

The structure reminds you of the plain brick-made buildings of 11th and 12th centuries when Seljuks were ruling in Iran. The corner bastions are very robust and decorated with bricks. One won’t realize how delicate some of the details inside the building could be without exploring it. At the south eastern corner of the citadel, a bastion is leaning like it’s going to fall down! It’s been like that for years and has been reinforced to stand on its place.

Above the entrance gate, you will notice a sizable tile-worked scene of Rostam’s battle against a demon. Rostam is the protagonist character of Shahnameh, the epic poem book of Ferdowsy, the most well-known Iranian poet of 10th and 11th centuries. After entering the vestibule a corridor leads you into the large courtyard with an astonishing orange garden!

The garden inside the large courtyard of Arg-e-Karimkhani takes approximately up to 80% of the area. The rest, courtyard floor, is all covered by marble stone from the time of construction. A pathway from the center of the garden leads to the middle of each side of the courtyard opposite a portico leading to some of the rooms of the building.

As you enter the courtyard from the vestibule, at the opposite side of the courtyard, under the large wind catcher, there’s a portico that could be seen right away. Inside the beautifully decorated rooms of this section, attractive wax statues revive the setting inside the court of Karim Khan where he met with officials and ruled over the territories under his domination.

The fresco embellishment of the walls and ceilings are fabulous examples of how beautifully Zand art vitalized official and non-official buildings of that period. A combination of gold leafs with relatively dark red colors were used to give elegant taste to the interior walls of the royal buildings.

Adjacent to this mail room, sometimes a couple of other rooms are opened to the public to see the local costumes of Iranian women of various ethnic groups. The colorful gowns seen here are still worn by local people when you travel to different parts of Iran.

On the very south eastern part corner of the courtyard, there’s a door that leads to the Arg-e-Karimkhani’s bathhouse, Hammam. This handsome bathhouse has got all the architectural sections of any similar structures, which make it worth a visit. The simple yet likable plasterwork decorations on the walls of this hammam, imply the love in flowers and nature, what Shirazi artists have always been inspired by.

Marble floors and seats, insulated pools for hot and cold water, clay-made pipes for heating beneath the floors and transferring water, and so forth are all observable and the echo returning your voice inside the big hall of this hammam reminds you of the lively setting of old bathhouses where royal family met and had themselves washed and massaged by the servants.

Visit Pars Museum of Shiraz While Traveling in Iran7 Benefits of Private Tours inside Iran
Scroll to top
Need Help? Chat with us
Start a Conversation
Hi! Click one of our member below to chat on Whatsapp
The team typically replies in a few minutes.
farzaneh
Incoming Department