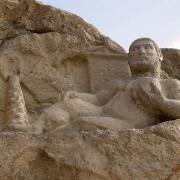 As the capital of Kermanshah province, it’s situated in western Iran. Kermanshah is the principal city in this region, and also one of the tourist Attractions in Iran. With an altitude of about 1200 m above sea level, it has a moderate and mountainous climate. According to 2006 census, the population of this city was about 950400. The language mostly spoken in Kermanshah is Kurdish.

The average annual precipitation and relative humidity in this region is to the extent that mountain slopes and plains are mainly covered with woods and pastures, and in some areas dry farming is applied. The average annual temperature is about 14 C there.

Lying within the Zagros chain, and providing natural shelters and caves were the reasons which made Kermanshah a proper settlement for humans in Stone Age. Archaeological excavations prove that prehistoric people used to occupy this area. The discovered objects dates back to at least 200000 years ago.

A major part of the city’s prosperity depends on agriculture. But there are also some other factors like food processing, constructional materials, and local handicrafts like kilim or carpet weaving, cotton-shoe making (Giveh), leather works, etc. Kermanshah is a center of Iranian and Kurdish traditional music. It’s been the homeland of prominent figures in literature, art, history, science, and politics.

Major industrial installations in this city include sugar refinery factories, oil refinery, petrochemical complex, cement factory, and a citric acid plant which is the only one throughout the Middle East.

This city is also well-known because it’s related to a legendary Persian love story. The story narrates a tragic romance between Khosrow II (the last king of Sassanid Empire), Shirin (Khosrow’s lover), and Farhad (a stonemason who was in love with Shirin).

This city has a lot to offer as a tourist attraction.

Kermanshah has been always the link between Iranian plateau and the Mesopotamia throughout its history. In the fourth millennium BC, the region currently known as Kermanshah province, was one of the most important centers of trade and commerce with Mesopotamia. There were also many conflicts and wars between these two nations. Therefore, this region used to be the center of various Iranian and Mesopotamian civilizations and governments for centuries.

During Buyid period, some miner Kurdish dynasties rose in the areas around Kermanshah. It had a military and economic importance in Saljuq period. The reason was its location at the intersection of a great highway linking the city to major trade areas inside and outside of the Iranian Plateau. And, it was one of the major cities as well as one of the dynastic capitals in Sassanid period. This glorious city was also the summer resort for Sassanid kings.

In 640 A.D., after the Arab invasion of Iran, Kermanshah was occupied and destroyed completely by Arabs. The population decreased, and its residents moved to another city. About a decade later, people rebuilt the city at the bank of Qarasu river.

During the reign of Abbasid caliphs, it was an important city because of its strategic location. In 1220 A.D., after Mongol invasion of Iran, Kermanshah was badly damaged again.

In the early Safavid period, due to Iran’s conflicts with Ottoman, ruling Kermanshah was a complicated situation. At times, Ottomans could defeat Iranians and rule over the city. But some other times, they were defeated by Iranians and left its ruling to Iran. But from the reign of Shah Safi, the sixth king of Safavid dynasty, to the end of Safavid period, the city was enjoying a period of peace and prosperity.

Benefiting from artillery attributed to Nader Shah, the founder of Afsharid dynasty, Kermanshah gained a military significance. Such condition made the city a battlefield between Nader Shah and Ottomans.

Because of its artillery, Kermanshah was the focus of attention after the death of Nader Shah. There were many conflicts over the takeover of the city among those who sought power, and it was Karim Khan Zand, the founder of Zand dynasty, who won.

In 1753 A.D., Karim Khan invaded Kermanshah, destroyed and evacuated it completely so that, for nearly 10 years, there was nothing called Kermanshah. Then, in 1762 A.D., the city was revived in the southwest of the former location, and Allahqoli Khan (from Zanganeh family, a local Kurdish tribe) ruled there as the governor.
Kermanshah enjoyed a short period of peace due to having Allahqoli Khan as its most powerful governor. But after the death of Karim Khan, he claimed the throne, and this led the city toward civil conflicts once again. Throughout Zand period, Zanganeh family governed Kermanshah most of the time.

In 19th century, Kermanshah experienced a progress in terms of commercial and strategic significance. The city was flourishing. It also had a political and social importance to the government.

The appointment of Mohammad Ali Mirza, the sixth king-to-be of Qajar dynasty, as the governor of Kermanshah was one of the best things happened to the city. He started urban planning and caused the city to develop greatly. For instance, he Constructed caravansaries and accommodations for merchants, and build a new fortress.

There were two major reasons which made Kermanshah a critical area for The Qajars. First, their relationship with Ottomans in Iraq. And second, making it secure for the pilgrims so that they could go to Iraq and visit the Shiite’s shrines there. Qajar kings managed to restore relative security in this region.

Kermanshah played an important role in Constitutional Revolution in Iran. It was a movement from 1905-1911 for establishing a constitutional regime in which the people of this city were actively involved.

In the late World War I, Kermanshah was seized by Ottoman Forces. Also, during World War II, Great Britain forces seized the city and it remained occupied until the end of the war.

Kermanshah played a major role in Islamic Revolution of Iran in 1979 as well. It was one of the resistance centers against Pahlavi regime. It was among the cities of Iran which underwent a lot of damage during the eight-year war of Iran and Iraq (1980-1988).

Dasht-e Kavir Iran
Scroll to top
Need Help? Chat with us
Start a Conversation
Hi! Click one of our member below to chat on Whatsapp
The team typically replies in a few minutes.
farzaneh
Incoming Department