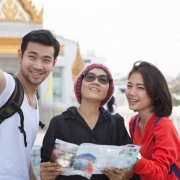 Official statistics show that the number of tourists from Iraq and the Persian Gulf littoral states visiting Iran has decreased in 2016 and 2017, while that of European and American visitors to the country has witnessed a remarkable growth since August 2015.

Although, compared to last year’s figure, the overall number of foreign tourists to Iran has reduced 6.9 percent in the current Iranian year (started mid-March 2017), statistics indicate that the decrease pertains to the number of visitors from the Persian Gulf littoral states, and not that of the European and American ones.

According to a Farsi report by ISNA, the director-general of Iran’s Office for Planning and Supporting Expansion of Tourism Industry, Abdolreza Mohajeri-Nejad, said over 1.14 million foreign tourists travelled to Iran during March 21-June 21, 2017.

This comes as, in the same period last year, the figure stood at more than 1.18 million, up by 6.9 percent, he added.

Mohajeri-Nejad said the decline in the number of tourists from the Persian Gulf littoral states and Iraq is the main reason for the drop in the average number of foreign visitors to the country during the three-month period.

“The number of visitors from these states to Iran was subject to a 9-percent decrease, year-on-year, in the said timespan, under the impact of the country’s weakened ties with the Persian Gulf littoral states – following the attacks on Saudi Arabia’s Embassy and diplomatic mission in Tehran and Mashhad (eastern Iran) in early 2016 – insecurities in the regional states and unfavorable economic condition in Iraq and Syria.”

The downward trend has continued in the past two years, he added.

Mohajeri-Nejad said from March 2016 to March 2017, the average total number of foreign tourists to Iran (over 4.91 million) was also 5.2 percent less than that of the same 12-month period ending mid-March 2016.

However, he said, despite the decrease in the number of tourists from regional countries to Iran during the 15-month period to June 21, 2017, that of European and American visitors to the country has grown 56.6 percent in the same duration.

“The increase has occurred as a result of the going into effect of the Joint Comprehensive Plan of Action (JCPOA) [signed in July 2015 between Tehran and the P5+1].”

He expressed the hope that in case the upward trend in the number of European and American tourists to Iran would continue, the country will definitely manage to achieve the targets stipulated in Iran’s Vision 2025.

As per the Vision 2025, Iran’s annual income from tourism sector is required to reach $25 billion (20 billion tourists per year) in eight years from now. To achieve the target, the country needs to be a destination for 5.1 percent of the total global number of tourists per annum.

Medical Tourists Looking for VIP Services in Iran
Scroll to top
Need Help? Chat with us
Start a Conversation
Hi! Click one of our member below to chat on Whatsapp
The team typically replies in a few minutes.
farzaneh
Incoming Department