Although the majority of Iranian are Muslims and follow Islamic practices, one can find a mysterious ritual practice  too. 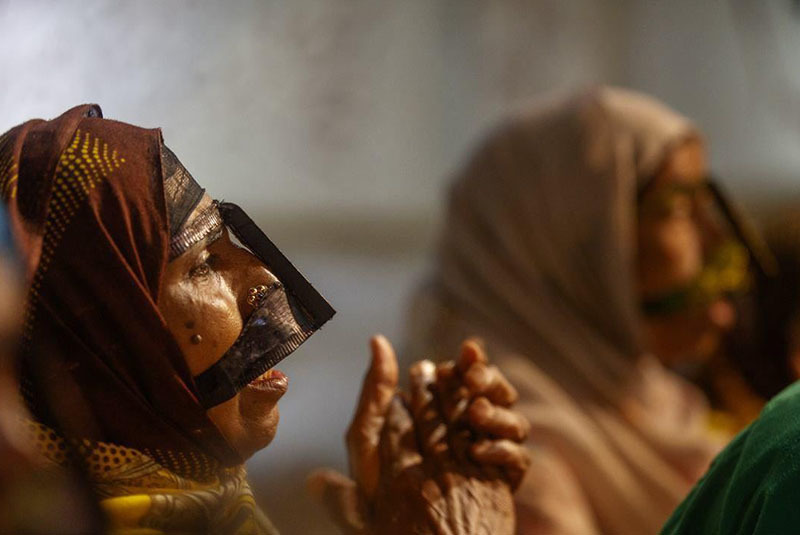 In southern coastal regions of Iran such as Qeshm Island, people believe in the existence of winds that can be either vicious or peaceful, believer (Muslim) or non-believer (infidel). The latter are considered more dangerous than the former and Zar belongs to this group of winds. Most types of Zar are very dangerous and cause disease, discomfort, and at times serious illnesses for the victim. Everyone is subject to the action of the Zar, but the poor and the deprived seem to be the most common victims. These beliefs are common to many areas in south and southwest Iran, including Baluchistan where harmful winds are usually called Gowat (wind or air).

Zar is a disease?

Special ceremonies are held to calm down the Zar and lessen the patient’s symptoms. These ceremonies, called by a leader, bring together the patient and those previously afflicted by the Zar and involve incense, music, and movement. Based on records regarding the Zar ceremony in Qeshm Island, roughly two phases in the ritual can be recognized: separation and incorporation. Preparations for the Zar constitute the separation phase. This phase begins with a person complaining from feelings of disease and discomfort to cult leaders (the male Baba Zar or the female Mama Zar). As some cult leaders have already been possessed by Zars and have managed to control them, they can help others in controlling their Zars.

Having opted for a remedy from Baba or Mama Zar, the patient will prepare to stay in isolation for up to seven days. During this period, only Baba Zar or Mama Zar can visit the patient and use specific treatments such as rubbing a combination of aromatic herbs, such as Guraku and Gešt, and spices on the patient’s body. After the separation phase ends, the patient’s body is cleaned and washed, and preparations are made for the incorporation phase. Members of the cult inform everyone about the upcoming ceremony and, as it is considered a sin not to attend a ceremony, every member of the cult attends.

How is it done?

Everyone gathers in a circle with the patient in the center while a piece of cloth, with eggs, dates, confetti, and aromatic herbs, is spread on the floor. After the patient’s head is covered with a piece of white cloth to keep him/her from the glances of strangers, a tray holding aromatic herbs on charcoal is passed around and the patient and the participants are frequently incensed with the smoke from the mixture. The Zar leader takes the lead on music (drums) and is followed by musicians and others present. The leader usually knows the name of the Zars and the music (specific beat of drums) that goes with them. Baba or Mama Zars also sing and the participants respond in turn. During the singing of the incantations, which can be in different languages or dialects or pure melodic sounds containing no discernible words, a Zar makes itself known by means of a sign that is recognized by the possessed person, who then feels a strong inner urge to move. Every piece of music goes with a specific spirit; with each type of music, some members of the cult may start moving and shaking. If there is no reaction from the patient, musicians change the tune until they see a reaction that helps the healer identify the spirit who has taken over the afflicted. The reaction is usually expressed as a swinging of the upper body, vertical movements of the head, and the shaking of the shoulders. When the Zar is identified, the healer starts a conversation where she/he tries to find out what the spirit wants in exchange for leaving the patient alone. Mama Zar or Baba Zar speak with the spirit through the patient and ask the Zar about the reasons behind the affliction as well as its demands for leaving the patient alone.

The belief among the cult is that if the Zar’s wishes are not granted, the Zar will return and create more problems for the patient. If the demands of the Zar can be easily obtained, they are quickly attended to through the initiation of a ceremony with music, food, and the offering that the Zar has demanded. Otherwise, the demands will be met at a later time in a similar ceremony. For example, if the Zar asks for a sacrifice or blood, there will be a ceremony where the sacrificial animal is brought in (with the patient riding it) and slaughtered, after which the blood is drunk by the leader and the patient. At this point, the incorporation phase is completed, the patient becomes a member of the cult and is expected to participate in all future ceremonies. These ceremonies may take up to seven days beyond the separation phase. Members of the cult must follow certain rules regarding their outfits (clean and white) and must adhere to prohibitions on the touching of corpses (animal or human), the drinking of alcohol, sex with unlawful partners Selling or letting go of the object the Zar has asked for is prohibited as well; if the Zar has asked for an outfit or an accessory, the patient must have that particular outfit/accessory on in all future ceremonies. It is believed that if these rules are broken, the Zars will rise again, thus necessitating another ceremony to appease them.

Tombs of Esther & Mordechai
Scroll to top
Need Help? Chat with us
Start a Conversation
Hi! Click one of our member below to chat on Whatsapp
The team typically replies in a few minutes.
farzaneh
Incoming Department