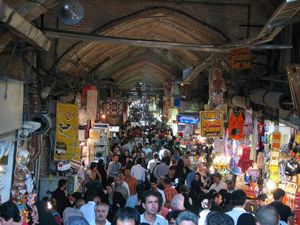 Iranian Bazaars (Persian Bazaars), these very old structures, were first formed as a set of shops at the sides of water streams or rivers in the cities.

Later, they were roofed and changed into present forms we see today in some parts of the world. Bazaars can be seen in almost all of old cities and towns of Iran. They are still in function.

To better understand the function of bazaars, we need to get acquainted with some words and terms used in Farsi. Here are some of the commonly used ones:

The biggest square of a city was situated at the entrance or exit of a bazaar like Naqsh-e-Jahan Sq. in Esfehan.

Therefore, in a more general and comprehensive sense, a bazaar consists of a set of roofed stores along with passageways and corridors as well as caravansaries, Saras, Timchehs, etc. There are also other public services like bathhouses, schools and mosques and so on in the same complex to satisfy various needs of the people inside bazaars.

Arrangement of Shops in Iranian Bazaars

People belonging to different walks of life were living near or far from bazaars. Bazaars were either too live or too dead quarters of a city at various times or occasions.

Knowing all above said information is not enough to come to feel the life inside bazaars. We need to know:

People of the same guild have to have their shops next to each other to prevent any disturbances or add to their security. Bazaaries have played key roles in the policies of Iran, because the main means of economy used to be bazaars. Today, as a result of modernization, they are gradually losing their former influence.

There are various jobs for those who are working inside bazaars like, merchants, distributors, brokers, money exchangers, porters, etc. It will not be precise to introduce all bazaaries as one, but there are lots of characteristics in common among them. Many of the people still working in bazaars are not educated compared to the other guilds of Iranian society. They know enough to run their own business. Also, the quality of life among those guilds inside the bazaars who make a lot of money is usually lower than middle-class educated people outside bazaars.

As the cities are growing in a huge scale in Iran, the distances are growing longer and longer within them. Therefore, it will be quite time consuming to take a trip from a spot in a large city to the other spot where the bazaar of the city is located. So, people prefer to go shopping in their neighborhood unless they need to buy plenty of items. Then, it will be worth to take such a trip and time to buy things all in a place and relatively cheaper.

In addition, in villages or less populated spots, there are two other types of temporary bazaars: 1) Seasonal bazaars, and 2) Day bazaars.

Bazaars in Iran (Persian Bazaars)
Accept settingsHide notification only
Need Help? Chat with us
Start a Conversation
Hi! Click one of our member below to chat on Whatsapp
The team typically replies in a few minutes.
farzaneh
Incoming Department
Faranak
Incoming Department