During Mehrabad’s status as Tehran’s international airport, it was Azadi Tower, the sentry to the capital city, that welcomed all visitors. A silent witness to Iran’s major historical events, this tower remains Tehran’s most iconic landmark. Read on to learn a brief history of the Azadi Tower.

In 1966, 24-year-old architecture student Hossein Amanat won a competition to design a building paying tribute to the 2,500th anniversary of the Persian Empire. The monument, formerly known as the Shahyad Tower, was completed in 1971. Combining elements of both pre- and post-Islamic architecture, the 165ft (50-meter) tall skeleton is clad in 8,000 blocks of white marble from Esfahan that are cut into various geometric patterns. It marks the west entrance to the capital city and stands on a 540,000sq ft (50,000sq meter) cultural complex known as Azadi Square, which integrates principles of the traditional Persian Garden through its immaculately landscaped lawn, pristine flowerbeds, and streaming fountains. All of these elements make Azadi Tower, or Freedom Tower as it’s also known, a favorite spot for foreign tourists eager to Instagram their arrival in Tehran.

Historically, political demonstrations have taken place against the backdrop of Azadi Tower, a solemn onlooker. These days, however, one of the only politically inspired events to take place at this site is the annual celebration of the 22nd of Bahman (February 10th), which commemorates the anniversary of the 1979 Islamic Revolution. On this day, Iranians march from all parts of Tehran, eventually convening at this square.

Visitors who fly domestically will catch a bird’s-eye view of this gatekeeper before landing at Tehran Mehrabad International Airport and being swept up by the maelstrom of traffic around the massive square. By taking the stairs or elevator to the top, you can behold buzzing, modern-day Tehran. The crypt museum, on the other hand, displays various ancient cuneiform tablets, ceramics, and pottery, as well as a replica of the Cyrus Cylinder (the original of which is housed in the British Museum). It is also a concert venue during the Fajr  International Music Festival, held every year. In 2015, Tehranis flocked to see German artist Philipp Geist’s Gate of Words, in which Azadi Tower was used as the canvas for a light installation, with words of peace, love, and freedom poetically shone in Persian, English, and German to live music. This has the tower playing less of a political role nowadays and acting more like a cultural ambassador. 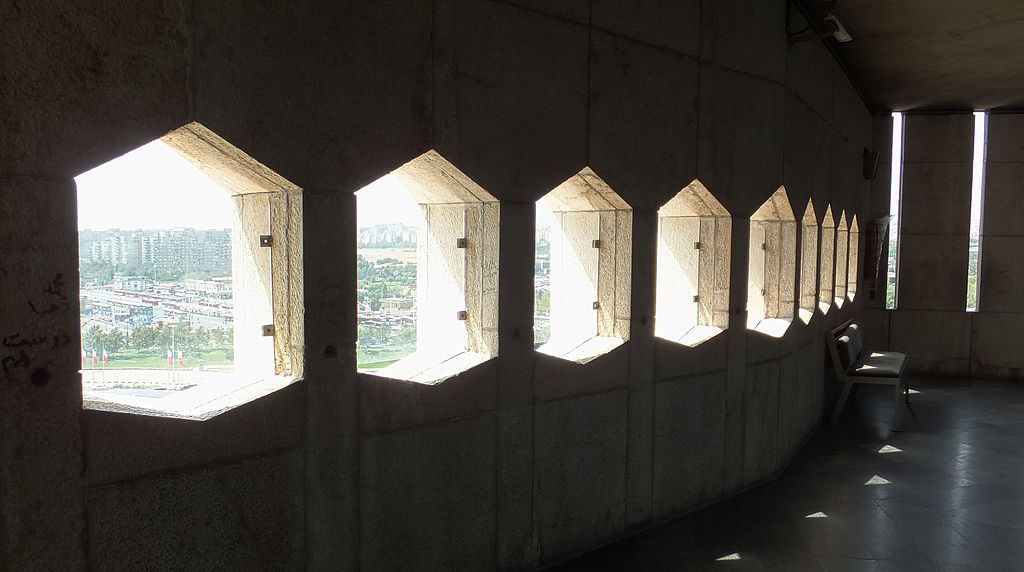 The 10 Most Impressive Buildings in Tehran

13 Reasons Why Everyone Needs to Visit This Island in Iran
Scroll to top
Need Help? Chat with us
Start a Conversation
Hi! Click one of our member below to chat on Whatsapp
The team typically replies in a few minutes.
farzaneh
Incoming Department