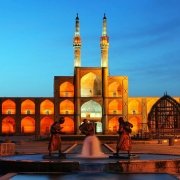 In the middle of the XV century, when Jalaladdin Chahmak, commander of Shahrokh Timurid, became ruler of Yazd. He and his wife Bibi Fatima Khatun built a complex with the purpose of improving the city, which became known as the Amir Chakhmak complex. This is one of the most significant historical complexes in the city of Yazd, located in the heart of the old city. A valuable complex of structures consists of a mosque, teki, Haji Kanbar bazaar, Bibi Fatima reservoir and other buildings. The complex of Amir Chahmak as a monument of the XV century is listed in the list of famous historical monuments of Iran. The area of ​​Amir Chahmak in the Safavid era was known under the same name. In the reign of Shah Abbas, some of these monuments were restored. On the eastern side of the Amir Chakhmak square is the Haji Kanbar bazaar, built by Nizam-addin Haji Kanbar Jahanshahi. After coming to power in the city of Yazd Jahanshah Kara-Kuyunlu, other monuments were built by his order. Subsequently, on the entrance portico of the market was built a sublime beautiful building in the style of other tekha Yazd. The construction works of the Amir Chakhmak mosque ended in 1437. It is considered to be the most beautiful after the Cathedral Mosque of Yazd.

The Amir Chakhmak Mosque with mosaic tiles and curved arches in terms of space, beauty and authority is also known as the “New Cathedral Mosque”. In this complex there are two reservoirs – Bibi Fatima and Haji Kanbar. Reservoir teka Amir Chakhmak currently functions as the “Water Museum”.

Towering over two minarets, this three-storey building serves as the grandstand for the Ashura Passion Play, in which the fight and death of Imam Hoseyn are staged. Each year to Ashura, the tenth day and highlight of the Shiite Mourning Month, Muharram, 200 million Shiites commemorate the Battle of Karbala, which ended in 680 AD with the martyrdom of the Prophet’s grandson, Imam Hoseyn, and the split of Islam into Sunnis and Sunnis Shiites finally sealed. Ashura, the tenth day of the month, is called Muharram, the first month in the Islamic calendar. This day is significant for all Muslims around the world and is celebrated on various occasions. On the square is also the heavy “Nakhl” wooden scaffolding. This is hung in the Ashura rites with black cloths and carried around on the shoulders of mourners. It symbolizes the shrine of Imam Hossein. The so-called “Naql” is adorned with black cloths, banners and with the portrait of Imam Hossein in the mourning procession on the 10th Muharram and then worn by well-built Porters through the city. 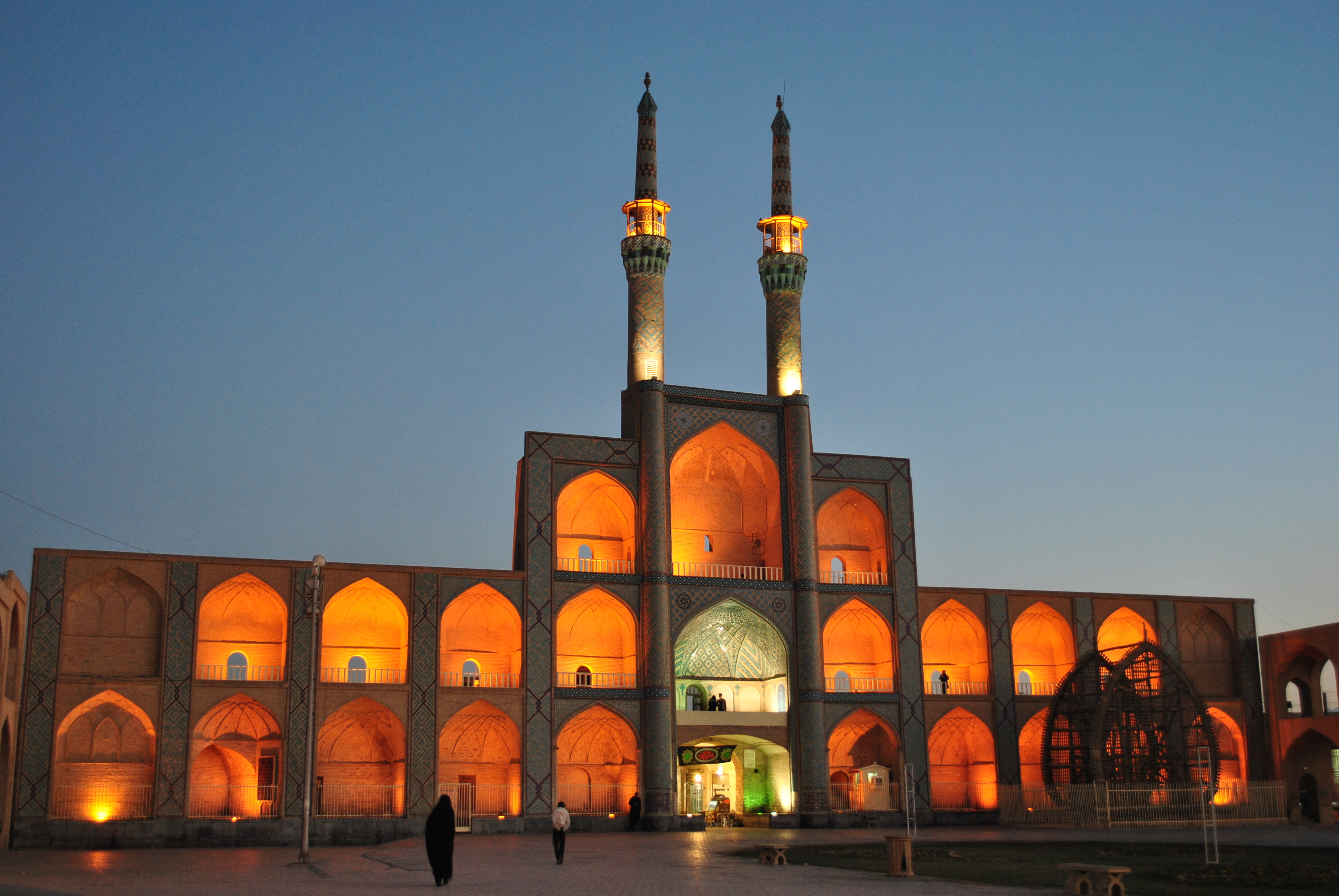 The Jame Mosque of Yazd

The Jame Mosque (Friday Mosque) is the grand assembly mosque of Yazd City. It was begun between 1324 and 1327 on the site of a former fire temple and a Seljuk mosque. It was funded by Seyed Rokn od-Din, who came from the wealthy Yazd patrician family. It was extended in 1365 and is today one of the outstanding buildings of the 14th century in Iran. The mosque is crowned by a pair of minarets, the highest in Iran (48 m). The facade of the portal is decorated with dazzling tiles, mainly in blue. Within the mosque is a long, arcaded courtyard (cream). Behind a low-lying Ivan (hall) is an altar chamber, a room cooled by a ventilation system. This chamber under the squat tiled dome is decorated with faience mosaics and its high faience mihrab (prayer niche indicating the direction of prayer) from 1365 is one of the most beautiful of its kind.

Especially worth seeing in the vicinity is the mausoleum Rokn od-Din – this has a turquoise dome with blue grid. The grave structure is characterized by the magnificent, reminiscent of floral carpet patterns paintings of the inner dome around which runs a tape. Here is buried Rokn od-Din, who founded the Friday Mosque and created many foundations. The mausoleum is visible from all elevated points in Yazd and is about 700 years old.

When entering the prayer ivan of the Jame Mosque, a Friday mosque, as the word “Jame” already says, it gets really atmospheric. Even the richly decorated with tiles and mosaics entrance portal lets the head fall for many minutes in the neck and shocked by the prayer rugs still in the interior of the octagonal, half-open and richly decorated patterns.

You can end your beautiful day with a tour of the old town, marvel at the beautifully decorated dome of the Rokn-od-Din mausoleum (tomb of the founder of the Friday Mosque of Yazd).

After a short stroll through the relatively manageable bazaar of the desert city, you land unexpectedly in a particularly atmospheric place. In a mausoleum on the boulevard Salman-e Farsi stands the shrine of Prince Fazel. It is worth visiting the place because the green color will give you a calm and relaxing time.

8 reasons for Rafting in Iran
Scroll to top
Need Help? Chat with us
Start a Conversation
Hi! Click one of our member below to chat on Whatsapp
The team typically replies in a few minutes.
farzaneh
Incoming Department