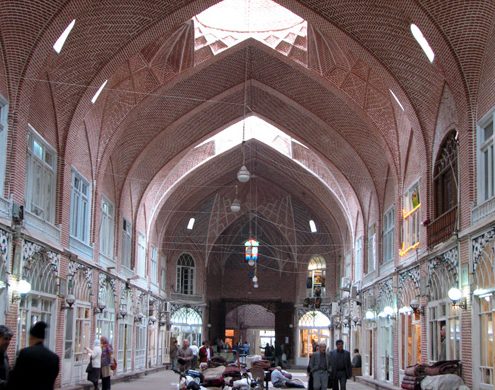 The bazaar of Tabriz is one of the top tourist attractions of the city. No tours to Iran or trips to the North West of the country makes sense without including Tabriz bazaar in it. This roofed bazaar is one of the oldest in the Middle East, and according to some people, the largest of its type in the world. The fact is this place is awesome and highly recommended to visit.

In fact, the history of this bazaar goes back to the time of Seljuks, 12th century. As Tabriz has been on the main trading route of the east-west and Silk Route, its bazaar had gained a very significant place as the economy heart of a large city in prosperous Persia. All throughout the history, travelers and historians have mentioned in their notes what has continually contributed to the popularity of Tabriz bazaar is the abundance of commodities like fruits, high-quality textile, precious stones and gems, etc in this city.

When Baghdad was destroyed by Mongols in 13th century, Tabriz gained even more importance. In 14th century, it prospered so much to the point that Marco Polo and Ibn Battuta described it as one of the richest trading centers in the world. In 16th century, under Safavid rulers, Tabriz was brought to the center of attention and its bazaar showcased the economy of the country. Manufacturing of items made of copper and leather was increased. Making of weapons, rugs and soap was boosted.

In 17th century, when Shah Abbas I moved the capital city from Tabriz, the bazaar lost part of its importance but kept it somewhat both in the city as well as North West of Iran till now. Despite several shopping centers and other trade areas in Tabriz, many people still prefer to go to this place for their shopping needs.

A devastating earthquake in late 18th century brought a lot of damages to the city as well as its economy and the bazaar. In 19th century, Tabriz bazaar was flooded and was subject to lots of damages.

As I’ve already mentioned about the bazaars of Iran, one shouldn’t look at bazaars as traditional shopping centers of the old times. They are a lot more than that. For instance, they have had a decisive role in the politics of the country. They have played major roles in solidarity with religious, revolutionary and economic movements in Iran. They are living communities in which plenty of life is continuing. That’s why the House of Constitution, where revolutionaries used to hang out in approximately one century ago,  is at the periphery of Tabriz bazaar.

It was in 20th century that the city economy thrived and its bazaar was largely repaired and reconstructed. Tabriz bazaar played a major part in supporting Islamic revolution in 1979.

Tabriz Bazaar is a large compound that consists of several caravansaries, Tim, Timcheh, Sara, Saracheh, etc. The gradual formation and combination of these sections have interconnected them functionally to one another so that best services could be rendered to the customers and merchants while local traders could provide, sell and distribute the products most conveniently. Among all these sections, you may find Amir Bazaar (for gold and jewelry), Mozzafarieh (a carpet bazaar), a shoe bazaar, etc.

If you ever take a tour to Iran and visit Tabriz bazaar, make sure you remember spending some time in one of its traditional tea houses. The setting, decoration, style of serving tea and set of tall water pipes on top of all tables are spectacular. Water pipes at Tabriz traditional tea houses are not anything recently added for fun or popular among young generation. The customers seem to take smoking more seriously than how young guys do the same.

Why Visit Tehran in Your Tours to IranWhy Visit Esfehan at the End of Your Trip to Iran
Scroll to top
Need Help? Chat with us
Start a Conversation
Hi! Click one of our member below to chat on Whatsapp
The team typically replies in a few minutes.
farzaneh
Incoming Department