According to many who have already visited Esfehan, it can be considered the most charming and attractive city in Iran. It seems that there’s something in the air that makes the city so likable. As it’s got some of the highlights of a trip to Iran, the absolute majority of tour operators plan the itineraries in a way that Esfehan is the last stop before getting back to the capital city, Tehran.

Zayandeh Rud (The River) Cuts through the City 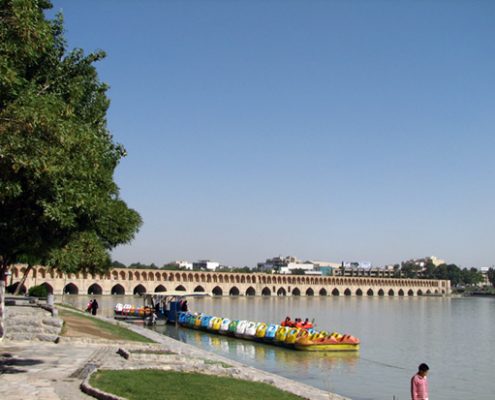 As the name explains it, the reproductive river, gives life to the farms all along it for 400 km, creates perfect living condition for people, etc. There are parks on both banks of the river for kilometers and this lets the people from Isfahan and environs to spend some time relaxing at the shade of the trees, stroll with friends and family and revitalize themselves and enjoy their time.

This river has been redirected in form of narrow streams of water snaking through residential areas and irrigating trees on both sides of it thus creating shady neighborhoods and stunning ambiance. Some of the royal gardens of Safavids (16th to 18th centuries) were irrigated this way.

A lot can be said about the city planning at this beautiful city, but I suffice to what can be seen immediately. First of all, it’s green. You see several fully-shaded streets with pleasant sidewalks for pedestrians. There are some major boulevards like Chahar Bagh that split the city into Eastern and Western halves. There’s such a broad shaded space in the middle of the street that city hall has placed benches for the people to sit down and relax.

Like I’ve mentioned before, there are parks all along the river on both Northern and Southern banks. You can go jogging, walking, etc for hours. You can go on a picnic like the majority of Iranians do. You can hire a boat and go peddling. There are fabulous bridges with traditional tea houses attached to them where you can sip your tea while enjoying the sound of water and watching the life going on around you.

There are also good highway system that helps you make your inner city trips shorter at the outskirt of the city. A lot of overpasses and underpasses have been constructed to ease the traffic.

The way the city hall is working, like in most of the cities in Iran, the streets and alleys are all very clean. The street sweepers are working around the clock and people care very much about the cleanliness and attractiveness of their cities. 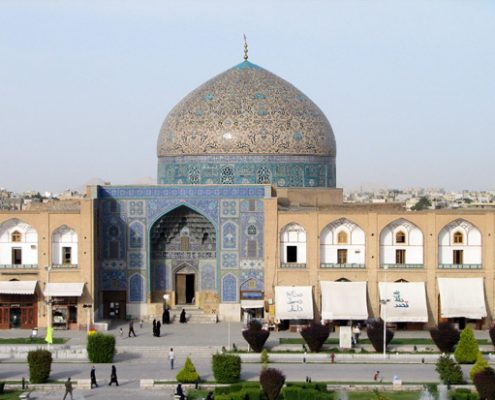 Needless to say, when you visit Isfahan at the end of your tour to Iran, you leave the ultimate beauty of Islamic architecture to be seen during the last days of your stay in this country. Iranian architecture of each historical era has got its own charm, but when it comes to the structural techniques, tile glazing and decorating skills, there are no other old monuments in Iran that could match the buildings in Esfehan.

The famous Naqsh-e-Jahan Square (Emam Khomeini Square) is the heart of the historical city. The early 17th century square with its monuments and set of shops all around it has created a unique setting you won’t see anywhere else in Iran. The royal mosques, palace and the famous Qeysarieh bazaar have all contributed to make this place an unforgettable one.

There are other mosques like the old Friday mosque of Esfehan that are astonishing and worth visiting. There are other palaces like Chehel Sotun and Hasht Behesht that couldn’t be ignored while you’re in Esfehan. The old bridges and the arches on which the bridges are built together with their illumination at night are the attractions you cannot simply cross out of your list.

Handicrafts of Esfehan and Its Artists 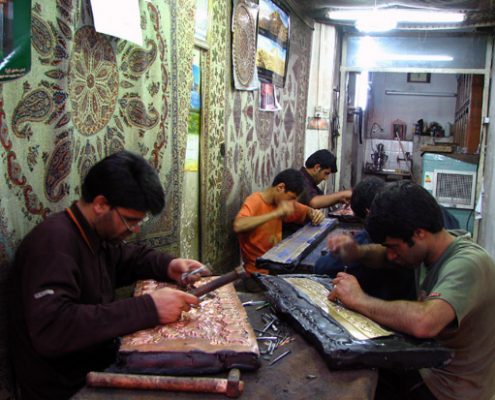 A group of craftsmen working in a metalworking workshop in Esfehan

There are several workshops and art galleries where you can see the actual artists and craftsmen who are creating beautiful works of art. Out of approximately 150 different handicrafts produced in Iran, almost half of them are made in this city. Great collections of artistic works, carpets, miniature paintings, etc make Esfehan the city to do the shopping during your stay in Iran.

The globally recognized Iranian miniaturists who are working in their galleries in Esfehan, are open to welcome travelers in their shops. These people are keeping this Iranian art alive by following the traditional styles of centuries of miniature painting in Iran.

On the Southern bank of the river, where the community of Armenians have settled since 17th century, the time of Shah Abbas the first, Jolfa is the quarter worth visiting for both its fascinating churches as well as culture. There are lots of good coffee shops here that you can enjoy spending time in and having something to drink. Coffee is part of Armenians’ culture. So, if you want some good ones in some interesting ambiance, Jolfa is the place.

The last but not the least is hospitable local people, who are so proud of their city and happy to welcome foreign travelers. Even among Iranians, this is an attractive destination and every Noruz, Iranian New Year,  as well as summer holidays, there are millions of Iranians who visit Isfahan and explore its beauty. So, the local people have got the reason to feel proud of their legacy.

Esfehan, because of what you’ve read so far, is the place where people have been exposed to tourists very much. Tourism has brought business and employment to the city. The local people are happy to see tourists and are helpful to them.

In general, if there’s a reason why some travelers come back to visit Iran again and again, it’s the people who are kind, generous and welcoming. You have to see it for yourselves to enjoy it.

Include Tabriz Bazaar in Your Tours to IranIran Travel Advice about Telecommunication and Internet
Scroll to top
Need Help? Chat with us
Start a Conversation
Hi! Click one of our member below to chat on Whatsapp
The team typically replies in a few minutes.
farzaneh
Incoming Department