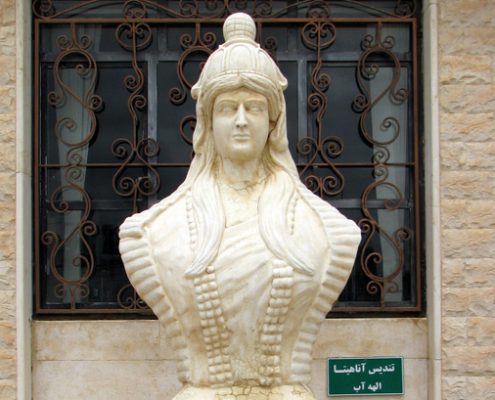 Anahita, The goddess of water & Fertility in Ancient Persia

Iranian myths consist of the views and perspectives of the inhabitants of Iranian plateau about the confrontation with good and evil, gods acts, heroes’ bravery and legendary creatures. These myths play very crucial roles in Iranian culture.

Most of our information about Iranian myths come from two sources:

In this world, life is a reflection of universal struggle between Ahuramazda and Ahriman. All men must choose either of these too.

Anahita is the goddess of all waters on the earth and the source of all oceans in the universe. She is on a chariot being drawn by four horses: wind, rain, cloud and hail. Because of Anahita’s connection with life, warriors ask her to keep them alive and give them victory during wars.

Verethraghna is the god of warriors and assaulters and is the source of victorious power against demons. Ahuramazda advised Zoroaster to take a feather of Verethraghna from a bird’s body while trapped in adversary’s magic.

Mithra is the most famous ancient Iranian goddess. She was believed to watch human beings and their actions, agreements and contracts. She led people in the right path and protected them from attacks. She controlled the order prevailing in the universe.

Vayuo is the god of wind attacking evil spirits in supporting Ahuramazda’s good creatures. He reigns between the realms of Ahuramazda and Ahriman, meaning between light and darkness.

Tishtar is the god of rain originating from Varukasha Sea (Farakhkart) and distributing water among all countries.

Atar, fire, is Ahuramazda’s son. People were expected to present meat to fire as sacrifice while having a bunch of sacred plant called barsom in their hands.

Hoom is a god who presents health and power and blesses children and crops.

The Creation of Universe

Ancient Iranians believed that everything was created in a specific order beginning with heaven, water, earth, fire, human being, respectively. Some of the things created first were very well respected like the Alborz, the first mountain, Simorgh, the first bird, etc.

When the first sin was committed, the whole creation was filled with corruption and decay and replaced peace and order.

Some evil forces attack human bodies directly and some indirectly. Demons are false gods and fairies are female evil spirits acting during nights. They all serve Ahriman.

Simorgh nests on the tree of all seeds and disseminates seeds by flapping wings all around the world.

Kar is a fish that lives around the tree of all seeds and keeps all harmful beings away from this tree.

Qoorbagheh, frog, tries to chew the roots of this sacred tree.

Joghd, owl, is a bird that casts away demons by uttering holy words.

Chamroosh, a patriot bird, vanquishes lran’s adversaries and helps to spread the seeds of the tree of all seeds.

There were also some unpleasant creatures like rodents, lizards, turtles, spiders, bees, ants, beetles, etc. There were some legendary monsters against whom human heroes struggled. They were often in form of snakes or dragons the most significant of whom was called Azhdihak, a three-headed monster devouring human beings. It is called Zahak in Shahnameh.

Kyumars, meaning mortal, is the first legendary man who is described as a handsome and attractive man and as bright as the Sun. It is believed that he has been born out of the earth.

Jamshid is the greatest hero who is introduced as the king of the whole world. Everything is good during his ruling period.

Fereydoon, another king, is always remembered for his struggle against Zahak. He does not kill him, but imprisons him forever in the mount Damavand.

Rostam is one of the greatest mythical heroes in Shahnameh. He turns out to be the symbol of physical as well as spiritual power and devotion for his country. He is such a strong man who can defeat an elephant instantly by his mace.

Rakhsh is Rostam’s horse and the only horse whose belly does not reach the ground when Rostam presses his hand on its back. So, it is chosen by him to be his faithful servant. It passes through all hardship and battles along with Rostam and eventually dies with him.

Sohrab is Rostam’s son who grows up to be a strong brave young boy. His father, who does not know his son before giving him the last deadly blow, ultimately kills him.

Siavash is a prince who learns all the techniques and skills of princedom from Rostam. Since he refuses to answer positively to the temptations of his father’s wife, his father wants him to pass through fire to prove his innocence. This was a pre-Zoroastrianism tradition. At last, he becomes the victim of Garsivaz’ intrigues and is killed an innocent death.

In addition to Rakhsh and Simorgh mentioned earlier, there are other mythical creatures like:

Akvan-e-Deav is the most famous demon that attacks kings’ herds. Rostam is called for help and at last defeats it.

Ancient Iranians’ legends and myths still continue in People’s beliefs in various ways. It can be even traced in Iran’s present adjacent countries.

In fact, the secret of the survival of Iranian culture and language together with all rich traditions and social concepts can be found out in keeping these legends and myths directly or indirectly.

Iran NomadsMysticism & Sufism in Iran
Scroll to top
Need Help? Chat with us
Start a Conversation
Hi! Click one of our member below to chat on Whatsapp
The team typically replies in a few minutes.
farzaneh
Incoming Department