Iranian cuisine offers a large variety of foodstuff, but not necessarily Iranian restaurants in general. In other words, people make and eat quite a range of different dishes at home. You can try them too particularly if you eat with them inside their homes. However, when they eat out and go to restaurants, many of them prefer grilled food that are not so easily made in apartments, meaning kebabs.

If you’re a vegetarian, then you have to be very patient, because there are not much choices in restaurants for you. Yet, you can always find some food and drinks in Iran for yourself by doing some little shopping and buying some of the world’s best nuts, dried fruits, fresh fruits, etc and have it with you during the trip. 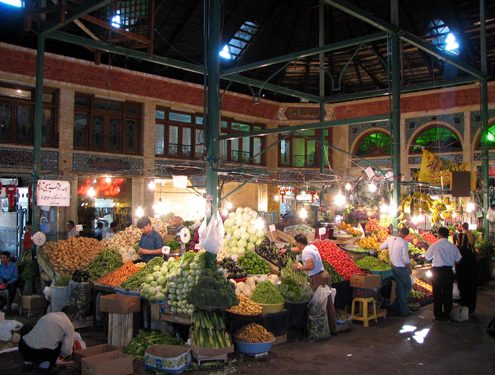 The fact is Iranian kebabs are prepared differently compared to those in Turkey, etc. Iran grills its kebabs in form of  skewed meat. When you’re traveling in Iran for a few days, you already know the restaurants’ menus by heart:

In some restaurants, they may go further and offer Caucasian Kebab, Bulgarian Kebab, etc! This is the general menu for food and drinks in Iran. Of course, there are some Western-style restaurants in big cities offering large variety of other dishes as well.

Apart from that, some other dishes are usually available like mixed rice with herbs, vegetables, etc that comes with lamb shank, cooked chicken, etc.

Other Traditional Food Made at Home

Sometimes, stews are also on the menu. Make sure you try them as they don’t so often appear there. Most of the people make them at home. They are the traditional dishes that are very much well-liked by most of the people. They are always served with cooked rice.

Keep in mind that if you visit various parts of Iran, there could be local food and drinks served in their restaurants you might not find in other cities. So, make sure you go to some local restaurants to find them and try them. This is the case in places like north of Iran, south of Iran and generally the areas that are somehow far from the modern aspects of international food consumption.

One important point to remember is popular restaurants where the majority of the customers are local people could be safe places to eat. There are always general tips working in every country. For instance, if you see someone is offering foodstuff at the side of the street where passing cars produce lots of dust, you wouldn’t take the chance to try the local food. Or if the local authorities have announced that it will be safer to keep away from vegetable stuff like salads, etc, just follow the common sense.

What Drinks Are Served in Iran

Drinks are usually in four categories:

If you’re drinking bottled water during your trip ion Iran, you may not want to drink any of those drinks mixed with ice as most of the time, ice is made from tap water.

What you should not expect to be served in Iran

You will be able to have only the type of meat that are approved by Islam like lamb, beef, chicken, turkey, quail, fish, prawn, shrimp, and lobster in some restaurants. You can never find pork, snake, frog, and other kinds of meat that are prohibited in Islam.

Alcoholic drinks like beer, wine, vodka, etc are not served in restaurants, hotels, etc. There’s a strong ban since the 1979 revolution in Iran against the production, possession and distribution of such drinks. It’s not worth trying to find it under any circumstances either.

Nobody knows it better than you if certain type of food could bring issues to your stomach or not. Are you susceptible to fat food? Why don’t you keep away from such food anywhere you are in the world?

If you already know your intestines are sensitive toward unknown bacteria, why should you insist on testing some new type of salad you’re attracted to? Isn’t it better just to look and learn about it instead of taking the risk and trying it?

Keeping away from personal risky eating habits will save your traveling time and that of your fellow travelers. You will not want to keep an entire group of travelers for waiting and worried about you as you’ve ended in a clinic for two days due to a mistake.

I must admit that despite all the precautionary steps recommended above, Iranian food is quite healthy and safe. Hygienic measures are closely supervised by related authorities and eating out is very popular among the  people in Iran. In rare occasions, you may find some foodstuff dangerous to eat, etc. It’s just the common sense that dictates more caution for eating.

Just rest assured there are some very interesting and delicious Iranian food that you don’t want to miss when you visit Iran.

Iran Travel Advice about Food & Drinks in Iran
Accept settingsHide notification only
Need Help? Chat with us
Start a Conversation
Hi! Click one of our member below to chat on Whatsapp
The team typically replies in a few minutes.
farzaneh
Incoming Department