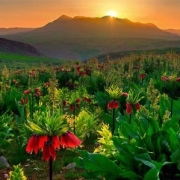 The land of Q Inversed Tulips

The province of Chaharmahal and Bakhtiari covers 16, 533 square kilometers

of land is a mountainous region in the southwest of Iran. The provincial capital is called Shahr – e – Kord, with the height of 2.150 meters, being the highest city in Iran. The province has vast forest covering almost 30,700 hectares of land, which include oaks, wild pistachio, nuts, and almond. The mount Zagros is an attractive range of mountains stretching from northwest to southwest of the province.

As a whole, 76 percent of the province is covered by mountains and hills. The most famous and highest mountain is Zard Kooh.

(yellow mountain) and the highest peak is ” koloonchi “.

Mount Zagros has beautiful icebergs and a particular road formation, making it a particular interest to the mountain climbers from around the world. The most famous natural attraction is called the chaghkhor pond. This beautiful pond is about 2,300 hectares and is situated near the town of Boldajee. The fine weather and the natural beauty of its beautiful native birds, make this province one of the most pleasurable attractions in the world.

The famous mineral spring of the province is called Dimeh, which is the main source of Zayandeh Rood [ river ], one of the important rivers of Isfahan, and is 10 km away from a town called Chalgerd, near a village called Dimeh. The water of this spring is among the best and purest mineral waters and has medical remedies (prevents the decay of the teeth and remedies the kidney stone)

12km away from Chelgerd which is a place near the village of Bano Esteki in the suburbs of Koohrao city.

This amazing and wonderful covering of tulips to a vast area approximately 3/400 hectares.

This tunnel was built in 1953 to transfer the water of Koohrang and other springs to the Zayandeh Rood. the nearest tourist city is Chelgerd the central city of knohrang. During all seasons even winter, this place makes an ideal place for the skiing enthusiasts