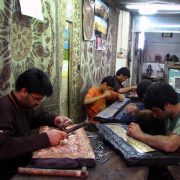 Iran exports handicrafts valued at $250 million each year, said a top official in the handicrafts sector.

According to ifpnews.com, Deputy Head of Iranian Cultural Heritage, Handicrafts and Tourism Organization (ICHHTO) Bahman Namvar Motlaq further said, “Handicrafts exports have currently tripled and even within the country, there is a growing interest in handicrafts given the measures adopted.

“The handicrafts of every country are the first representation of that country’s culture for tourists, and, hence, are very important.”

He said roughly ten percent of the turnover in the handicrafts sector is associated with exhibitions, which not only serve as a forum for economic activity, but also provides an opportunity to make the public familiar with handicrafts.

He said the handicrafts sector can bring in money and create jobs.

“Official figures suggest the country’s handicrafts exports stand at $250 million annually. With just $1 million in the handicrafts sector, we can create ten times as many jobs as we can with one million petrodollars,” he said.

“Handicrafts have a very high added value, and this industry does not need contribution by foreign companies,” he noted.

The land of Q Inversed Tulips
Scroll to top
Need Help? Chat with us
Start a Conversation
Hi! Click one of our member below to chat on Whatsapp
The team typically replies in a few minutes.
farzaneh
Incoming Department