If you travel to Iran, you will certainly be amazed by the number of Iranians who visit the tombs of their poets. You see how they respect and show love for the ones buried in these places. You find out the passion and affection in their manners and treatment of the tombs. Based on what I’ve heard from the international travelers for years, this is some rare scene in the other parts of the world. 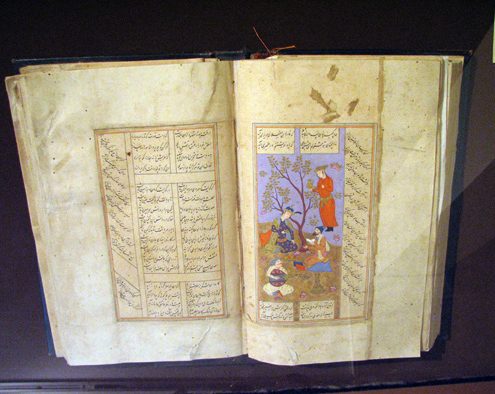 A book of Persian poems with miniature paintings

As children, Iranian students begin to learn poems and even memorize them in the early years of primary schools. They get familiar with the rhythm and rhyme as well as the different styles of poetry. They learn about the famous Iranian poets. Persian literature is full of distinguished styles. Many of the textbooks they study are written in Middle Persian, the language used in Iran some 1400 years ago. Although the language has gone through lots of changes, it’s still understandable.

During high school, students study more complicated Persian literature and particularly poetry. This continues in the universities regardless of what you study.

A lot of Persian expressions are in form of poems. Persian poems are very rich in subjects like love, modesty, wisdom, appreciation of creation, nature, and so on. Therefore, there are several occasions coming our ways in which one remembers some Persian sayings. For centuries, those who knew such expressions and used them in certain situations were considered the educated ones. In some other cases, one may even recite some lines of poem.

There’s no Iranian home without Persian poetry books. People continue reading poems outside schooling system too. Before the time of equinox and the coming of the New Year (Nowruz), during Yalda night (the ceremonies for the longest night of the year – Dec 20th), and many other occasions, Iranians read poems.

Iranian traditional music is so full of classical Iranian poems. Some Iranian poets are well known for their musical poems. Some of them have got powerful soothing effect. Some make you very happy and some are deeply sad and full of emotions. In various states of heart, Iranians can listen to various types of music. 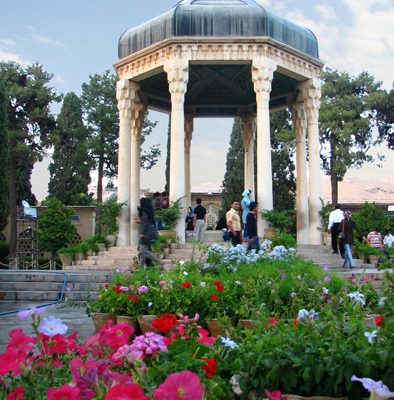 Tomb of Hafez decorated with flowers

The eloquent Persian language is used in journalism too. Sometimes the headlines as well as the news articles you read are embellished with poems, expressions and references to particular poems. Some of these poems have got a work in them which are, by themselves, a reference to another story or group of people with particular mindset and belief, etc. Therefore, understanding Iranian poems, music, stories, news articles, etc could be quite complicated, but not very much for a nation who is brought up with it.

I can say Iran has offered some of the most famous poets to the world literature. They represent a nation with profound culture and thoughtful ideas.

Ferdowsy is the Iranian poet of 1000 years ago. He composed the most famous Iranian poetry book called Shahnameh. This was an unparalleled effort to save the Persian language at the time when Arab invaders had forced Iranians not to speak, write or compose anything in Persian. His epic works set nationalistic feelings ablaze in Iranians hearts.

Omar Khayyam was a well-known mathematician and poets who lived some 900 years ago. His short poems are full of maxims about life and joy.

Saadi was a man of traveling living some 800 years ago. He had studied in Nezamieh University, Baghdad. He returned to his homeland toward the end of his life and soon gained large popularity due to his lovable poems highly appreciated by the people contemporary to his time. His famous poem has decorated the UN building as below:

Human beings are members of a whole,
In creation of one essence and soul.
If one member is afflicted with pain,
Other members uneasy will remain.
If you have no sympathy for human pain,
The name of human you cannot retain.

Rumi was the unique Iranian poet of 700 years ago. His rhythmic poems describe Iranian traditional systems of music. His words of wisdom, spiritual and love poems are still quoted by Persian speaking people. His book became the bestselling book of late 20th century in the US and his poems’ recordings made their way to the Billboard’s top 20 list.

Hafez was the master of Persian ghazals and still is after 700 years. The figurative language he’s used was an escape way under the rule of Mongols in Iran. His description of love and beautiful language of spiritual values are uniquely adorable.

In addition to such famous poets, there are large number of other poets who are quite well liked by Iranians although non-Iranians may have not heard of them. 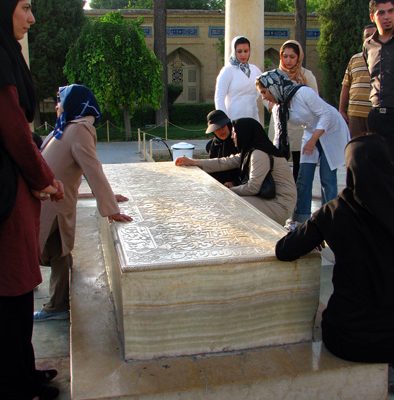 People showing their affection at a poet’s tomb

When Iranian go to the tombs of poets, they treat them like a lost beloved family member. They put flower on their tombstones. Sometimes, they wash the tomb with rosewater. They sit down and pray for the dead poet. They talk to them and ask them to talk back with them. They bring the poet’s book with them to read or recite some of their poems to stay connected with them.

Such tombs are inside beautiful gardens, not among other graves in a cemetery. The decoration of the settings around it and the monument built for them are parts of the whole honor dedicated to them.

Reputation of Iranian Poets among Foreigners

Every year, there are several commemorative ceremonies and conferences for the above poets and others in Iran. Many people specialized in studying these poets’ works come together to discuss various dimensions of their characters and works. There are universal days allocated to such poets and non-Iranians understand the importance of such men of wisdom in the development of human knowledge.

Therefore, when you visit Iran, make sure you have a deeper look at the settings in which Iranians go to such tombs and grasp the feelings and appreciation to such gems at Persian literature.

Shovel Turning Ceremonies (Bilgardani) at NimvarCustoms and Traditions before Nowruz – Part 1
Scroll to top
Need Help? Chat with us
Start a Conversation
Hi! Click one of our member below to chat on Whatsapp
The team typically replies in a few minutes.
farzaneh
Incoming Department