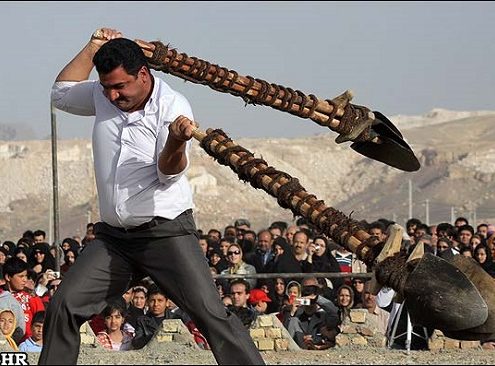 People of Nimvar, near Mahalat, central Iran, still keep shovel turning ceremonies to cherish water and thank Anahita, the ancient goddess of water. “Bil” is shovel and “gardani” means turning in Persian. It symbolizes the joint effort and empathy among the people living in a community carried out every year at the beginning of the spring. This rain prayer ceremony in Iran is deeply rooted in irrigation culture and showing off the power to the enemies, those who steal the water, etc. In addition, Nimvar inhabitants believe they gain more water and blessing if they continue to keep observing it.

I must add that Iranian Cultural Heritage Organization has registered this tradition as “National Intangible Cultural Heritage” and every year more people are learning about this local annual festivity and participate in it.

How Shovel Turning Ceremonies Are Held

Late winter and early spring are the time periods when the local people and farmers go out to Shajoob, the main river of Nimvar. They unblock the water brooks anywhere the course of water is clogged by mud or wild grass. This is to make sure water reaches its destination. When water gets to the main sub-branch leading to a brook called “Vargoo”, the bilgardani ceremonies begin. Therefore, farmers can achieve their goals to irrigate their farms and be certain they would get the crops they’ve planted for. 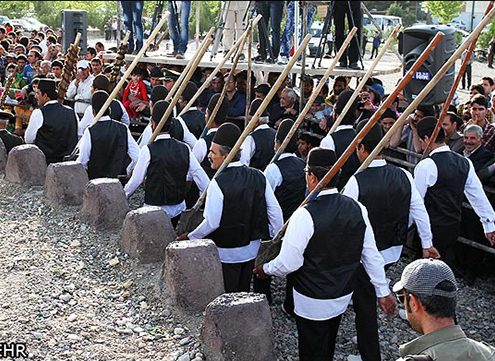 When the elders of the town announce it’s time to clear the brooks off the obstacles, people collaborate to let water flow all the way to the farms. When this stage is left behind and the farms are irrigated, farmers and athletes of the region begin to go to the ceremonies location where a large crowd participates to watch it.

The festivity goes on for several days. Every day, farmers march with their shovels to the ceremonies location, which is at the center of Nimvar on a platform. The athletes of the region bring two sets of shovels tied in a bunch of 4 and 3 tied together separately. Now an athlete can go to the middle of the gathering and hold each set in one hand and start turning shovels. This requires a lot of physical strength and skill, which is something only the trained ones can do.

Each bunch of shovels could weight approximately 30 kg. Athletes are supposed to turn them from 5 to 30 times around their heads in opposite directions. During this time, people begin to pray for rain, the heavenly blessing. This involves the wish for the seven skies to start moving around and let the rain come down upon the area where they live. They want the divine mercy in form of rain for their farms as their lives depend on the crops they harvest each year. 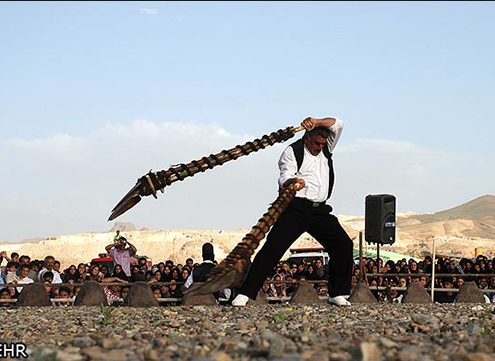 Performing shovel turning on Nimvar platform for the spectators

The History of Shovel Turning Ceremonies

The people of Nimvar used to hold this public ritual of Bilgardani since 2000 years ago in central Iran. In addition to asking for heavenly blessing, they took the opportunity to show their physical strength to their enemies so that they could remain in peace without any outside threat to their peaceful lives. Also, this is a rain prayer ceremony in Iran out of several held in various parts of Iran.

Some also analyze this event as an example of ancient people’s encounter with natural challenges. People have always tried to tackle the obstacles in nature and in life reach to their goals. In doing so, some efforts have turned into traditions and accompanied by certain ceremonies. This is another example of such efforts by ancient Iranians.

I know the following video isn’t in English, but imagine you’ve traveled to Iran and participated in a 15-minutes bilgardani gathering in which English isn’t spoken. Just go through the entire clip and see which activities it involves:

Iran isn’t the only ancient country in the world holding such ceremonies. You can find similar ones in other parts of the world too. What happens in Iran these days, is a lot more organized than the old times. Certain types of local food and soup are cooked and served. Traditional local music is played and people enjoy watching and listening to it. Sometimes, particular water-related plays are performed.

All this is a reminder of the importance of water and its vital role in today’s life. No matter how advanced we are, water is always a necessity and resources are scarce. All of us need to think twice about our models of water consumption. Industries need to think again about how they use water to reach their goals. What do you think about our usage of water today?

Celebrating Yalda Night in Iran a Joyful Family GatheringWhy Many Iranians Visit Tombs of Poets?
Scroll to top
Need Help? Chat with us
Start a Conversation
Hi! Click one of our member below to chat on Whatsapp
The team typically replies in a few minutes.
farzaneh
Incoming Department