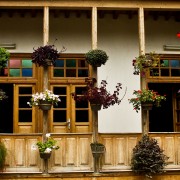 Masuleh one of the most beautiful Stair villages

situated in a mountainous area covered with lush vegetation and luxuriant forests, Masuleh is a village enjoying the splendid natural beauty. Being a village of great antiquity, it is like a living architectural and anthropological museum, attracting a great number of tourists each year.

Masuleh is 36 kms south -west of Fuman, in the province of Gilan. It is bounded on the north by the village of Alyan, on the east by Shaft, on the south by Poshtkuh-e Khamesh, and on the west by Zanjan province. It is surrounded by the Talesh mountains, some of which , located in the west, are more than 3000 meters

high. Although Masuleh is near the Caspian Sea i is 1050 meters   above sea level. This creates a pleasant climate. Lying between the sea and the high Alborz Mountains, wich trap humidity from the air, it enjoys a pleasant climate with high annual precipitation and lush vegetation. The fluctuation of temperature varies from a high of 20 ° in to a low of -2° in winter. The annual average precipitation is 713 millimeters , wich occurs mainly in autumn and winter.

The most important mountains, affording spectacular landscapes, are as follows: Kuh -e Rash, Kuh -e Makuf , Kuh-e Dasht-e Gileh Sar and Kuh-e Gur. Many rivers originate in យ៉ា , the largest of which is the Masuleh Rud. This river wich is formed by the merging of the Zangol and Gilvan rivers, runs as a mountain stream but flows into the plain and then to the swamp of Siyah Kashim. There are some other rivers, like Andareh and Nilikhali , merging into the Masuleh Rud .

In this area are found broad-leafed deciduous trees – maple , hornbeam, beech, walnut, taxus and fagus. Grass and vetch grow on the highlands.

Masuleh dates back to great antiquity and was on the road connecting Azerbaijan to Gilan .

The ancient village of Masuleh was located 4 kms north-west of the present one Masalar and Khortab Khani are old names of the village. In winter, it is thinly populated, since most people leave the village. The people living in Masuleh are the Talesh ethnice group , speaking the Taleshi language.

Because of the topographical features, agriculture is not an active industry and most people are engaged in animal husbandry and producing handicrafts. The articles such as gelims (rugs made of goats’ hair), jajims (fine carpets made of wool or cotton), socks. traditional dress, knives, spades, axes, scissors, and scythes are produced in Masuleh . Making a certain type of shoes called chamush is another occupation. The leather used for making chamushes are produced in the tanneries of the village itself. The shops selling traditional goods are scattered throughout Masuleh .

Some people earn their livings by selling goods to the shepherds and buying dairy products from them. Apart from natural beauty, the unique architecture of the buildings is of high attraction for tourists. Most houses are two or three storeys high . Set on the slope of the mountain, the houses are arranged in a stair-step, so that the roofs of some houses are the yards of the others. The roofs also form the public passages.

Masuleh consists of four neighborhoods : Khanehbar , Masjedbar , Asad and Kash-e sar-e-Olya. It covers an area of 150000 square meters, and the difference between its highest and lowest point is 100 meters. The configuration of the village indicates that in the past the people showed much consideration for security . The houses and the decorations  the rooms represent the oriental character of life . The lattice windows and closets with exquisite decoration  are exponents of  the original Iranian craftsmanship. Most  houses  include a certain hall in which the family lives in winter  , a small veranda  extending from the  front of the house , and a guest – room . The houses of the rich include curtain small rooms in which precious articles are kept .

The materials used for building the houses are mud-bricks stones, timbers, clay and wild ferns (which abound there and are used in the roofs). Two kinds of soils, called yellow soil and dark soil. found on the river, are used for covering the outer walls and the roofs respectively.

The configuration of the village’s buildings makes the entering of the automobiles impossible . This has helped the original atmosphere to survive. The oldest buildings date back to 300 year ago, but their architecture is similar to that of the Sassanian period  . There are eighteen mosques and five shrines in Masuleh , the mostirnportant of which are Jame mosque and the mausoleum  , the Imam Zadeh Own obn-e Mohammad-e Hanafiyyeh located in the neighbourhood of Masjedbar the door of the mausoleum  , on  which there are highly impressive carved designs, is made of ebony.

The bazaar from which a spectacular landscape can be seen, is roofless and multi-storeyed . It is in the bazaar that many of handicrafts are produced and sold.

The library of Mausleh, dating back to thirty years ago, includes over 5000 volumes . The hotel of Masuleh is an impressive building .

The people living in Masuleh have the greatest respect for their own traditions. A religious ceremony called Touqbandi, being of high importance, is taken place in the seventh night of each lunar Islamic year, in front of Jame’ mosque. The wedding ceremonies are also of high importance . In the wedding night, the bride

followed by her relatives and friends who are singing songs praising Ali (peace be upon him ), the first Imam of the shi’it branch of Islam , walks to the groom’s home , entering it just at dawn. Spelendid natural beauty, a pleasant climate, luxuriant forests, lush vegetation , the unique architecture of the buildings and hospitable people make Masuleh a point of great attraction, regarded and registered as a national asset.

Travel to the most beautiful and greenest countryside in northern Iran

Ahwaz Visiting Places
Scroll to top
Need Help? Chat with us
Start a Conversation
Hi! Click one of our member below to chat on Whatsapp
The team typically replies in a few minutes.
farzaneh
Incoming Department