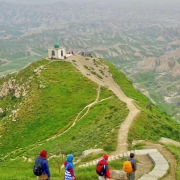 Travel to the most beautiful and greenest countryside in northern Iran

The smell of local bread, Voices of Swallows, spring blossoms, Roaring waterfalls, Massive forests, Mountains covered with flowers and plants Along with hospitable people, has created a paradise in northern Iran that attracts everyone.
A trip to northern Iran in the spring is inconspicuous.In springtime walking in the rain, among the blooms and colorful flowers, and staying under the gable roof is a beautiful and fascinating experience.Needless to explain that each season of Iran northern province has its own property.countrysides in North of Iran in addition to the greenery, with some exquisite landscapes, meadows and gorgeous forests are a beautiful collection of hundreds of small paradise and spectacular views.
To access these tiny heavens, you should cross the mountainous and green roads.
The attractions of traveling to northern provinces of Iran can be described in several sections:

Natural features
Most parts of northern Iran are covered with forest and there are about 3,400, 000 hectares of forest in the northern slopes of the Alborz Mountains and Caspian Sea Provinces.These forests with 40 million years old and 80 tree species, are one of the most valuable forests in the world and is considered as a natural museum.
Alborz mountain range along west to east in the north of Iran, Continuing the Himalayas and Andes Mountains, has created very specific geographic features for this area.The Alborz mountain range and Damavand Peak are prominent in Iranian historical texts and legends.This mountain range is the longest in the Middle East and protect the northern parts of Iran from other parts like a huge historical wall.

Historical & Cultural features
Historical evidence in the northern regions of Iran confirms a history of more than 10,000 years in these areas.Evidence of residency in these areas, such as castles, towers, bridges, Historic hills, as well as the objects available in the museums, themselves testify to this historical record.Most of the historical monuments in the area have been damaged over the years due to persistent humidity.But you can still see some that are still healthy.
For example:
– The Hyrcanian Golden Cup, dating from the early 1st millennium AD (800s BC). It was excavated at Kalardasht in Mazandaran.
– Marlik hill in Guilan province with 3500 years history.
– Rudkhan Castle is a military complex which had been constructed during the Sasanian era (224-651),
– Ancient hill of Gerdkooh Ghaemshahr, with 5000 years history.
– Lajim Castle, Savadkooh, with 1000 years history.
– The Great Wall of Alexander or the Red Wall also called the Red Snake.
– The Tallest Brick Tower in the World, Gonbad-e Qabus Tower was built in 996 AD.
– The World’s Highest Natural Arch, Espahbod -e- Khorshid Cave.

People
It has been a host of historical tribal peoples from all over the world since the past, and many migrations have been made to this area.From immigration the historic tribes until the arrival of the Poles and Russians in World War, all have caused Gilan hosts many people.These people created a special sense of security in their guests, that’s why the people of this land were famous for hospitality.
They treat their friends well, but they fought hard against the enemy.The obvious example of this feature can be found in the Gilani encounter with the Arabs and for over a century of resistance to their entry into their land.
If in the architecture of Iran’s desert areas there are narrow streets and tall walls, there are still houses with short walls in Gilan.Because the desert areas have always been exposed to the invasion of the aliens and they paid a lot of attention to security.
The most important feature of Guilan peoples that attract the tourist is
the efforts of women and men side by side to the cultivation of rice and various products.A Strong social relationships and sincere cooperation are among them.

Architecture
The vernacular architecture of Mazandaran is full of
properties that are useful for new architecture.Studies in this area show that the past architecture of there is rooted in religious culture and attitude.Also   it’s beauty depend on it’s simplicity and avoiding   from extra elements.Familiarizing architectural  spaces with religious approach is a nessecity  that  can  solve  many  problems  of  new
lifestyles.The architectural style of the traditional living spaces in the houses of this region is in harmony with human dimensions.House components like stairs, Ivan, the kitchen and etc are formed by the minimum necessary in proportion to their function and avoid additional extras.

Food
Iran is all about originality.There are local and delicious dishes throughout this land.The taste of the Iranian food in northern region of Iran always remains in the minds of tourists.Nowadays Iran Northern food is so famous that it is considered as a Foodi Tour in the tour programs.The most delicious tourist attraction of Gilan is a local cuisine that has intruded the taste of nature within it.The most delicious food with the taste of nature that will keep you on the table.Gilan is the first Iranian province for local dishes. There are more than 170 local food is Gilan.According to experts Favorable weather, good soil in Gilan, is the main reason of various local foods in Guilan.