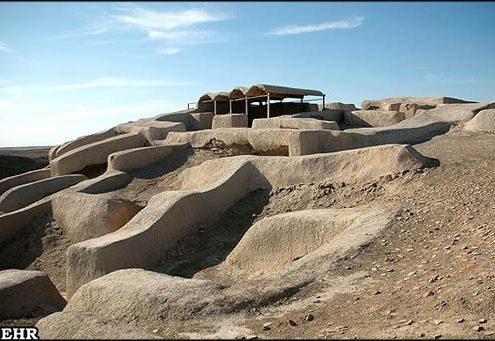 Shahr-e Sukhte (literally translated as the Burned City) has also been spelled differently as Shahr-i Shokhta in various sources. It is a vast archaeological site (151 hecares) made by mud bricks on the bank of the Helmand river, between Zahedan and Zabol cities, situated at South East Iran inside Sistan & Baluchestan Province. It dates back to the Bronze Age inhabited from 3200 to 1800 BC.

There were four stages of civilization living there. Before it was abandoned, the city had been burned down three times. Therefore, many had lost their lives. As a result, there’s a sizable graveyard attached to this settlement that has accommodated from 25,000 to 40,000 ancient graves.

The historical site consists of several historical mounds in a row. Each of them were allocated to a different function, like workshops, residence, graveyard, etc.

There’s no doubt that this ancient human settlement is indebted its significance to the interesting artifacts unearthed there. Several items have been discovered in relatively very good condition and unique objects have indicated a brilliant civilization at Eastern part of Iranian plateau.

The List of some of the most outstanding unearthed items according to chtn.ir and wikepedia.org: 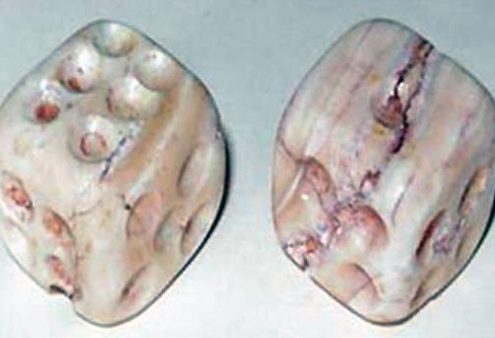 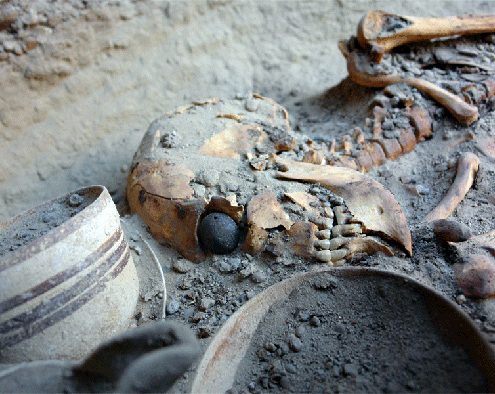 Culturally, it has been a rich city associated with Jiroft culture. In other words, this ancient site has been a human settlement independent of ancient Mesopotamia. Several discoveries have contributed to the fact that Shahr-e- Sukhte must have had a particularly remarkable culture. Here are some of them:

In addition, the culture beyond some of the practices and discoveries mentioned above (like artificial eyeball, brain surgery, ruler, backgammon, etc) are all indicative of a rich culture prevailing in this human settlement of the Bronze Age in South East of Iran.

A lot of excavations are performed at all the historical mounds of Shahr-e Sukhte. From time to time, there’s another news story about some new finding at this site. It should also be added that it’s not easy to carry out the archaeological excavation at this site due to the hostile climate of the region. Sand storm, high temperature of desert, etc are some of the difficulties the experts have to deal with.

However, some experts are working on the diet of people. They had found out that lentils and fish were some of the main foodstuff people used to eat there. More information will be coming out as more work is being done.

Bisotun A World Heritage Site at Western IranRemarkable Discovery of an Achaemenian Gateway Near Persepolis
Scroll to top
Need Help? Chat with us
Start a Conversation
Hi! Click one of our member below to chat on Whatsapp
The team typically replies in a few minutes.
farzaneh
Incoming Department