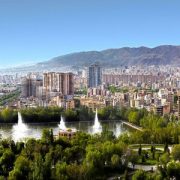 The selection is considered by the authorities as a great opportunity to attract tourists from all over the country and the region.

With the approach of 2018, officials in the province are implementing plans to attract more tourists during the event.

As part of the initiative, Majid Khodabakhsh, the governor-general of eastern Azerbaijan, invited the ambassadors from China, Japan, Sri Lanka, Tajikistan, Georgia, the Philippines, Thailand, Vietnam and Brunei to a two-day the region. province.

“With the World Crafts City and City of the Firsts titles as well as the world’s largest covered market, it would be enough to present Tabriz as an attractive destination for foreign tourists.”

He stressed that in addition to cultural and historical potentials, the city’s economic capabilities should also be highlighted.

“More than 4,000 industrial and manufacturing units and $ 1.8 billion in exports from the province offer great potential to attract foreign investors,” he added.

Khodabakhsh hoped that the ambassadors’ trip would contribute to a greater flow of tourists to Tabriz and the province.

Chinese Ambassador Pang Sen said Tabriz has so many attractions that one can not visit them all in two days, but hopes that useful data can be collected, especially on the city’s handicrafts during this period.

Nematollah Emamzadeh, the Tajik ambassador who was on his fourth trip to Tabriz, underlined the prospects of expanding trade relations with the province.

Tabriz houses a number of famous religious sites, such as the Great Mosque and Tabriz Citadel, as well as a UNESCO World Heritage Site in Tabriz Bazar. It has been declared World Craft City by the World Craft Council, which, together with Isfahan, makes it one of only two cities in Iran that holds the title.

East of Azerbaijan has more than 30 national intangible heritage inscriptions, 20 specialized and general museums, five inscribed natural sites and dozens of other historical sites, as well as unique handicrafts that can attract a large number of domestic and foreign tourists.

Kerman Economuseum
Scroll to top
Need Help? Chat with us
Start a Conversation
Hi! Click one of our member below to chat on Whatsapp
The team typically replies in a few minutes.
farzaneh
Incoming Department