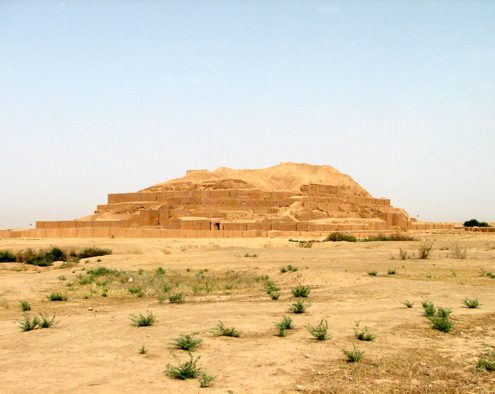 The name Tchogha Zanbil isn’t a very understandable word in Persian either. Tchogha Means “hill” in Lurish language of Bakhtiary tribes in Iran. Zanbil means “basket” in Persian. Tchogha Zanbil means a hill that looks like a basket! This is how people referred to this historical mound before it was noticed and excavated by professor Girshman, the French Archaeologist, between 1951 and 1962.

This temple was built by an Elamite king called “Untash Napirisha” in approximately 1275 BC around 35 km South of the ancient city of Susa. Tchogha Zanbil is a temple of gods. It is believed that originally it had been decided to accommodate 22 gods, but right after the death of Untash Napirisha, the construction of temples discontinued and the successors never continued what had been initially started. Today there are only 12 temples for eleven lesser important gods and one main god called “Inshushinak”, the god of Shush (Susa).

King Untash Napirisha built a town and named it after himself to challenge Susa that used to be the main center of Elamites for a long time. At the center of this walled town, he built Tchogha Zanbil to honor gods and accomplish a new style of temple construction. 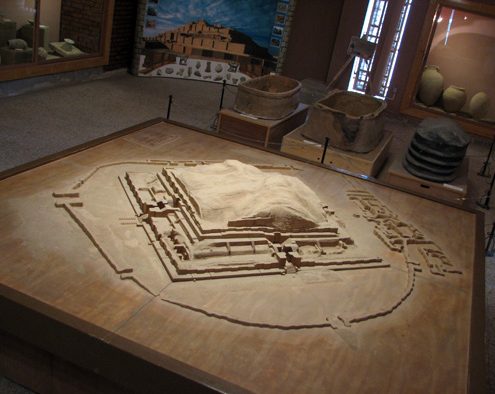 The ancient town of Untash Napirisha was surrounded by a wall approximately 4 km long. The temple was located in the middle of this town surrounded by two walls around it separating the temple from the town. You see one separating wall at the picture above as well as some other buildings between this wall and the other wall, which isn’t present at this picture. Also, there were several gates along these walls.

The main temple of Tchogha Zanbil is an example of Iranian architecture in pre-Islam era. It’s in form of a ziggurat, but unlike the Mesopotamian ziggurats, each level has not been built on top of the previous one. The temple was erected in two stages:

Four floors have been unearthed by Girshman. Based on the height of each floor, he assumes a fifth floor (a chamber) must have been there, the actual temple, called “kukunnum“. Considering such 5th floor there on top, the ziggurat’s height must have been 52 meters. Today only 25 meters of this structure is standing there yet giving such an awesome appearance to the temple.

The pavement around the temple are all treated by fired bricks extended from the structure to the first surrounding wall. The inner walls of the structure have been built with mud-bricks and the exterior walls with fired bricks. 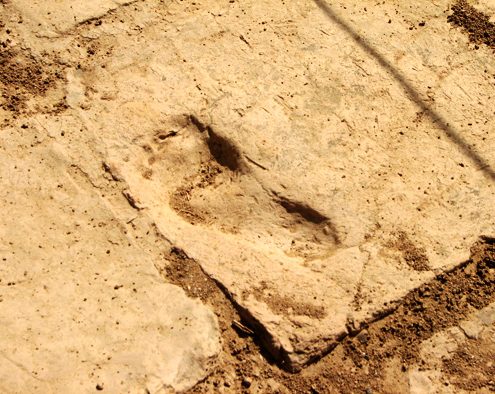 At the top of each entrance gate, located in the middle of each wing of this approximately square-based structure, there’s a vault made of bricks. This is the oldest example of vaults in ancient Iran. Later under Achaemenians, palaces had flat ceilings. Only under Sassanians, 1600 years later, vaults and arches became popular again.

In certain rows of the exterior walls, in one line, a lot of bricks are inscribed by cuneiform inscriptions ordered by Untash Napirasha dedicating the ziggurat temple of Tchogha Zanbil to the “god of Susa”, Inshushinak. 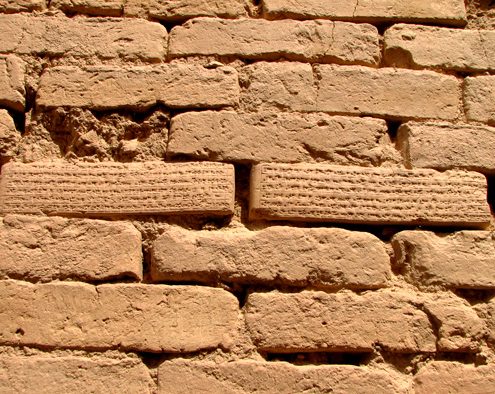 Unlike Susa and Kabnak (Haft Tappeh) ancient towns, where each tomb accommodated several corpses, here at Al Untash Napirisha, each tomb had only one skeleton and the rest of the bodies had been cremated. It’s not known why they were treated like that.

The doors of temples and palaces of the town were all made of wood decorated with glass tubes to be translucent. At one of the rooms of the temple, some black and some white tubes have been found that were used to decorate Tchogha Zanbil ziggurat, palaces, temples, palaces and even surrounding walls. This indicates Iranians were familiar with glass-making techniques around 33oo years ago.

At the North West of the temple, there’s a reservoir of water in which water was purified to be drinkable. It’s said that Untash Napirisha had brought water from some 50 km away from the town to be purified at this place. There were 9 conduits to lead the clean water to a small pool at a higher level so that people could fetch clean water there for consumption. According to another assumption, it was used to drain the rainwater from the surrounding buildings. 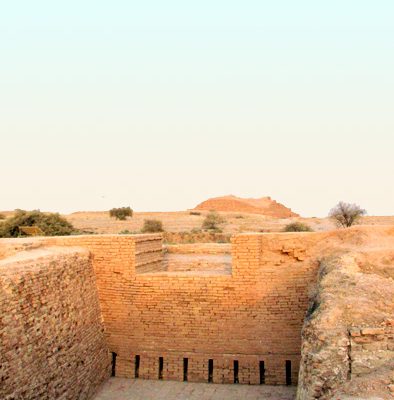 Water Treatment Structure at the North of Tchogha Zanbil Temple

For embellishment, glazed bricks, gypsum plaster works, vaulting, and some architectural ornament of faience and glass were largely made use of . Professor Girshman has discovered some ancient artifacts categorized as Elamite arts. Cylindrical seals, potteries, metal objects, clay-made figurines, and several other decorative pieces are some of such discoveries.

According to the evidences, ancient Iranians have been specialized in making sculptures. A bronze-made sculpture of Napir Asu (around 1800 kg), the wife of King Untash Napirisha, has been made by the same people, Elamites. It’s in Louvre museum now. 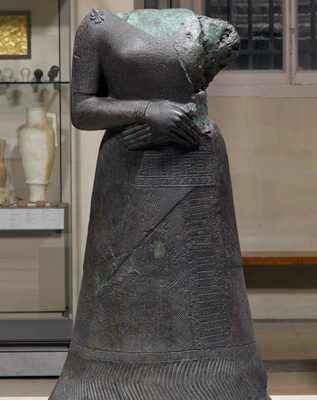 There were clay made bulls protecting the ziggurat’s temple entrances. One of them with cuneiform inscription on the back of the animal has been restored by the excavator’s wife. 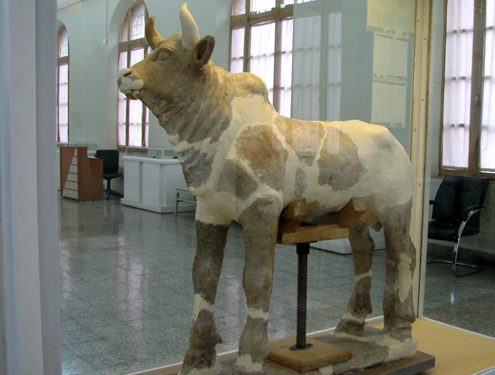 Snakes were the motifs symbolizing protection against evil forces. They were used at the jar caps. Also, snake motifs were found at the entrance gates and doors in form of glass tubes for protection. The motif of two mating snakes were Elamite symbols of fertility that were later used in other civilizations as well.

How It Was Destroyed

After Untash Napirisha’s death, Tchogha Zanbil temples remained a center of worshiping various gods for religious pilgrims and burial ground until around 1000 BC, when it was destructed by the Assyrian king Ashur Banipal. Assyrians believe this destruction led to the abandonment of the site at 646 BC, but according to the evidences discovered in one of the temples, Tchogha Zanbil and its surrounding structures were entirely abandoned at around 1000 BC. The city wasn’t rebuilt again.

Visit Shapur Cave and Get Hugely SurprisedKhorvin Artifacts on Display at Tehran’s Archaeological Museum
Scroll to top
Need Help? Chat with us
Start a Conversation
Hi! Click one of our member below to chat on Whatsapp
The team typically replies in a few minutes.
farzaneh
Incoming Department