This is the post I’d promised you to write about. The Iranian objects returned from Belgium, known as Khorvin artifacts, are now displayed at Tehran’s Archaeological Museum. This temporary exhibition is showcasing all the objects returned home from Belgium after almost a century. The photos you see at this post are all taken at this exhibition. 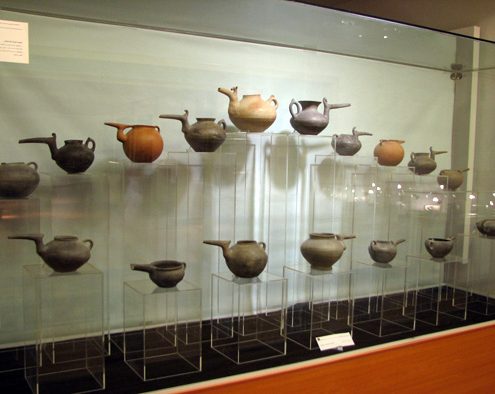 Here, first I introduce the ancient site of Khorvin OR Khorwin:

The Site of Khorvin & Its Findings

At approximately 80 km North West of Tehran, at the North of Karaj-Qazvin highway, there’s an area with two well-known historic mounds of “Ganj Tappeh” and “Siah Tappeh”. In 1949, Archaeological Center of Iran found out that particular type of ancient artifacts are being bought and sold among people. The center discovered these two historic mounds and carried out a series of excavations in elliptical graves. The findings were 228 objects that were transferred to the National Museum of Iran (the same as Archeological Museum of Iran) to be safeguarded there.

The burial rituals of the communities living there included various grave goods like pottery vessels, clay figurines as well as stone and bronze objects. In addition, they had ornamented these dead bodies with personal adornments like necklaces, diadems, earrings, bracelets, pins and pendants. Among the potteries unearthed, the majority was gray potteries without painted motifs and few plain red potteries were also discovered that looked like some other ones found in Tehran’s big plain. 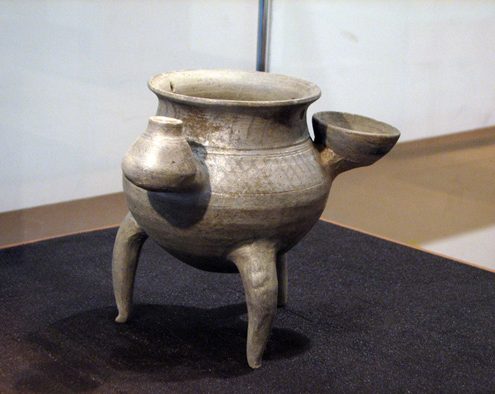 A three-legged gray pottery from Khorvin 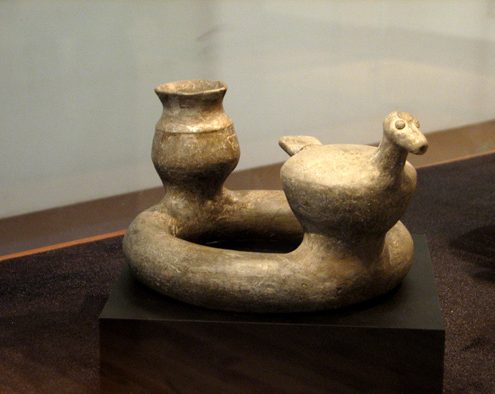 A zoomorphic pottery from Khorvin 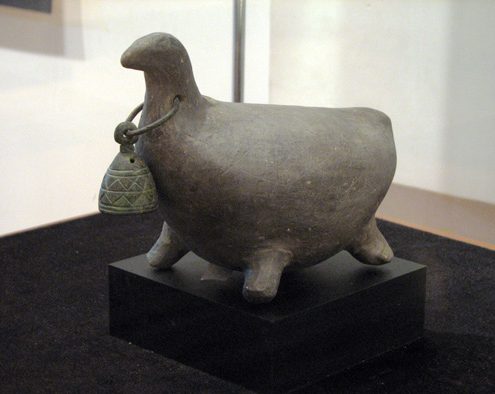 A monochromic stylized pottery from Khorvin

There are numerous bronze objects discovered in Khorvin site. However, the items made of copper and iron are rare. A large number of bronze objects of Khorvin are agricultural tools as well as weapons like dagger, spears, axes, maces and arrowheads. In addition, some objects are human figurines which have been interpreted as representations of warriors. 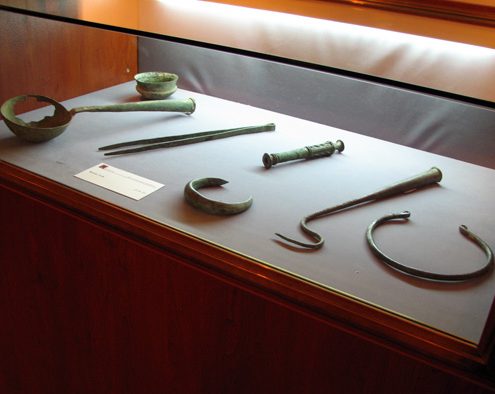 Some bronze objects (tools) from Khorvin

The Iron Age lasted almost a millennium, from mid-2nd to mid-1st millennium and came after Bronze Age. Archaeological theories discuss that gray potteries were introduced in Iranian craftsmanship since Aryan migration started in Iran (approximately at the same time of the Iron Age). Khorvin findings support this idea too. The resemblance of the findings from North, North West and North East of Iran as well as these items to the findings of a large number of the other historic mounds found at other parts of Iran provide reliable documents for the Aryans’ migration story to the Iranian Plateau. 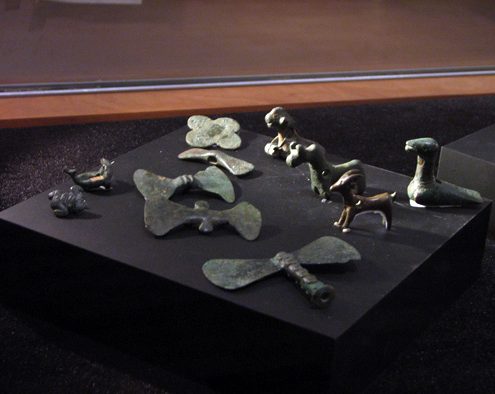 Moreover, these returned items from Belgium maintain the important role of the communities, living at the Northern and Southern foothills of the Alborz mountain range, in major cultural developments. The Southern foothill of the Alborz, where Khorvin is situated, has always been fertile with local economies thriving. Several small rivers could have been tapped as best water resources for agriculture and animal husbandry. Therefore, the inhabitants of these communities were more focused on producing food and improving living conditions than warfare. Interestingly enough, it’s been found out that the number of the weaponries in Khorvin objects was less than other sites in other regions of Iran.

The widespread usage of iron items in Iranian Plateau during the 9th century BC are convincing witnesses to the social, political and economic changes. The construction of particular public buildings and temples during this era is also indicative of such major developments.

Tchogha Zanbil Temple 1st Iranian Site Registered in UNESCOVisit The Ancient Bam City
Scroll to top
Need Help? Chat with us
Start a Conversation
Hi! Click one of our member below to chat on Whatsapp
The team typically replies in a few minutes.
farzaneh
Incoming Department