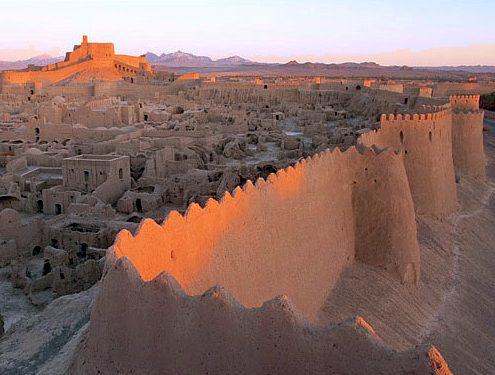 The ancient city of Bam and its protective walls

The ancient city of Bam, a world heritage site registered in UNESCO’s list, has emerged at least at the time of Achaemenians (6th to 4th centuries). The flourishing time of Bam traces back to 7th to 11th centuries when it was at the crossroad of ancient trade routes. This city started to be inhabited since Achaemenian period until around 200 years ago. After that, it was used as military station for soldiers until approximately 80 years ago.

The creation of the ancient city of Bam was indebted mainly to the ancient underground water supplement system of Iran called Kariz (qanat in Arabic). This system has been continuing the provision of water for this city till now.

Whereabouts of Ancient City of Bam

It has been located between the Southern part of Kavir-e-Lut, Southern desert pit of Iran and the Northern part of Barez local mountain range, South East of Iran. The importance of Bam has been due to its geographical location in a broader scale, in connection to the centers of commerce in Western Asia during antiquity.

Originally, like any other communities at or inside deserts, the city was surrounded by protective walls and its governor was living within another walled section, a citadel, inside the walled town. The entire walled city of Bam was 200,000 square meters. Desert towns feel safer this way and can grow much more confidently. The surrounding wall is as long as 1810 meters and its height varies from 15 to 18 meters. There seems to have been 38 watch towers along this wall and a deep moat outside the city’s walls, which was filled with water at the times of danger.

Apart from the walled town and its citadel being the central focus of this valley, the cultural landscape of Bam is connected to a series of forts and citadels now destroyed. Today you may see a fortress of 7th century called Qale Dokhtar at the North of Bam and a couple of shrines dated back to 11th and 12th centuries – Emamzadeh Asiri and Emamzadeh Zeyd mausoleums. 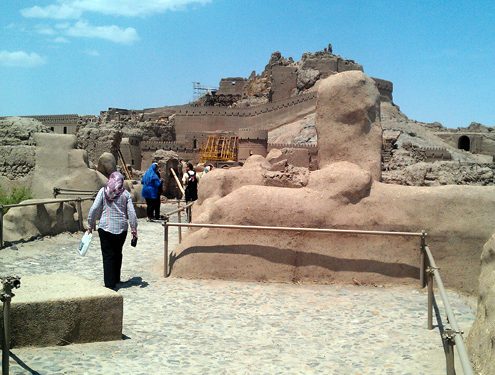 Tourists visiting the ancient city of Bam after earthquake

What makes the ancient city of Bam unique in regards to its construction is the vernacular technique applied there: Traditionally, the architects have used mud layers (Chineh), sun-dried mud bricks (khesht), and vaulted and domed structures. This is the best example of desert architecture that you will find in several parts of Iran around the deserts. No matter which part of the city we visit, we will see the same style and technique applied to the structures.

The ancient walled city of Bam consists of 2 main sections for the governor (citadel) and common people. The Governor’s section, built on top of a rock higher than the rest of the city, includes royal stable, garrison and governor’s house. The common people’s section, spreads out from the foot of the governor’s section to the city walls in a relatively flat area, has got all including what a city required: 528 residential houses, main bazaar, Meydan (Tekieh), Friday mosque, Mirza Naeem School, Zurkhaneh (traditional sport club), Malek-o-Tojar House (a merchant house), caravansary, public bathhouse (hammam), Jews’ Sabat (rest area) and a noble’s house.

Some of the most important structures are:

Bazaar: it’s 115 meters long accommodating 42 shops in it. It used to offer silk and cotton fabrics to the traders traveling on the spice route, a sub-branch of silk route.

Friday Mosque: It was built on the site of a former temple, a Zoroastrians’ fire temple, with four eyvans (porticoes), later changed to three.

Zurkhaneh: The tradition of building such clubs dates back to ancient times in Iran when this sport was exercised.

What separates the common people’s section from the governor’s is the government’s reinforced gate. There are two rooms attached to this gate when you enter with their upper floors for the guards. After you cross this gate, you will see a different section. First you go to the left where the royal stable is located. You turn right and go through a garrison where the governor’s soldiers and guards were stationed. A corridor on the right side leads you to a steep slope which goes up first toward the commander’s house on the right and eventually leads to the top, house of governor. 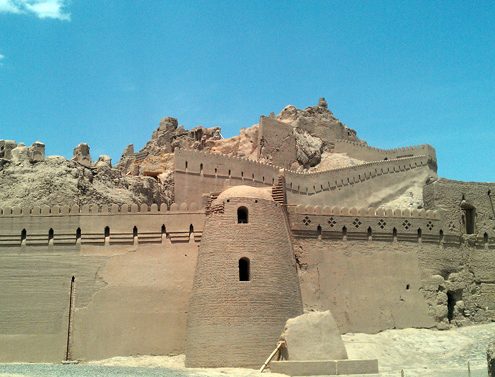 Governor’s Section at the Ancient City of Bam

The main part of this section is where the Bam’s governor used to live:

House of Governor: it consists of summer eyvan, winter eyvan and open space. There’s a building called four-season mansion. It could be used during all seasons as the name implies. It was a three-storey building. On top of all, there’s a watch tower square in base, which used to be circular and changed shape under Qajars after some destruction. Behind all parts of the governor’s section, there’s a private bath.

Apart from the Kariz system that brought water from Barez Mountains to the vicinity of the walled town and was transferred inside the walled city of Bam through a U-shaped pipe, many houses had their own wells. There was a deeper well half way to the top at the garrison and one well, the deepest, next to the private bath of the governor. Some water canals are on the surface for the irrigation of the trees. 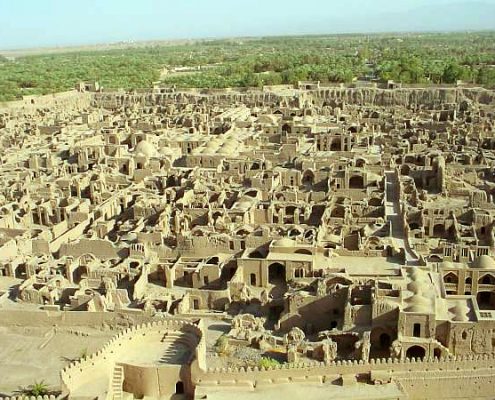 Outside the walled city, as the time passed by, the population grew and the security is the region was supported, some new houses were built and people started relocating to those houses. The centers of business moved outside and main places for religious ceremonies went outside the city walls. There are several palm tree areas and many trees along the streets shaping a garden city out there. Gradually, the walled city was evacuated and the new city of Bam was formed.
Some started looting the ancient city for the antiques, some for its fired bricks and some for the old soil to be used for their gardens. All these contributed to the tear and wear of the ancient walled city of Bam.

The 2003 earthquake largely devastated the new city and the ancient city of Bam. The newly restored city has kept its city planning and the ancient monuments’ restoration is underway. Fortunately, the foundations of several walls were still standing after the earthquake. This made the restoration job move convenient.

The city is undergoing more restoration these days, but it’s worth some exploration. Even before the earthquake when several world travelers visited the city, it wasn’t complete and intact. When you go to the ancient city of Bam, you see more or less what could be seen before 2003’s natural disaster.

Khorvin Artifacts on Display at Tehran’s Archaeological MuseumA Short Visit to Soltaniyeh Mausoleum
Scroll to top
Need Help? Chat with us
Start a Conversation
Hi! Click one of our member below to chat on Whatsapp
The team typically replies in a few minutes.
farzaneh
Incoming Department