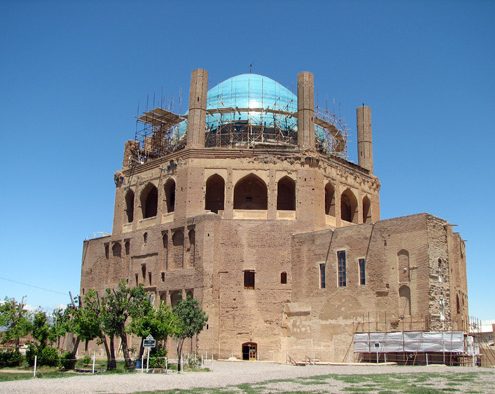 A General view of Soltaniyeh mausoleum

The ancient town of Soltaniyeh is located approximately 40 km west of Zanjan on the old road of Zanjan-Qazvin. Driving from any direction, you can redirect a bit into the present town of Soltaniyeh and pay a short visit to a fantastic World Heritage Site, Soltaniyeh Mausoleum. This town thrived under Oljayto, the Mongol king of Ilkhanid dynasty in Iran (14th century) and turned into the capital city of Iran.

He decided to build this burial structure in early 14th century because of his religious interest in Imam Ali, the first Shiite Imam as well as the rest of the Shiites’ imams. Eventually, he communicated with the religious leaders of Najaf and Karbala, today’s Iraqi cities, and got informed that exhumation weren’t allowed in Islam. According to many researchers, as he wasn’t allowed to bring back the bones of all the Imams to this mausoleum, he was the person who was finally buried there. Of course, some other researchers disagree with this assumption.

Although settlement had started in this area since first millennium, it was at the time of king Arghun of Ilkhanid dynasty around the end of 13th century that decision was made to further develop this area. He constructed a summer residence there due to the rich pasture for horses. Then, his son, king Ghazan came up with a decision to build a city there, of which little information is handed over to us. Later, his son, Oljayto, the first Ilkhanid king who converted to Islam, enlarged the city and called it Soltaniyeh, meaning imperial.

The ancient city was continuously inhabited until 16 and 17 century and together with Tabriz, Soltaniyeh turned into one of the main stops on Asia-Europe trade route. Several caravansaries were built along such routes. Some of them are close to this city which was a major stop on this well-known route.

The Monument of Soltaniyeh Dome 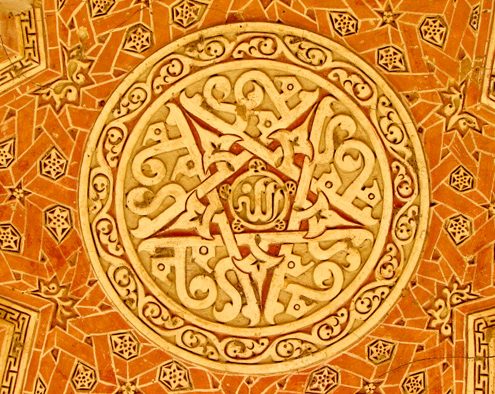 Inscription decoration at the ceiling under the Soltaniyeh dome

Soltaniyeh Dome, a highlighted accomplishment of Iranian architecture, is among the top three huge historic buildings in the world. The other two structures are Santa Maria Cathedral in Florence, Italy and Ayasofya Mosque in Istanbul, Turkey.

What distinguishes Soltaniyeh mausoleum, known as Soltanieh dome by many, is the substantial success of Iranian architects of that time. Building this burial structure, they had proved their achievement in innovative engineering creating spatial proportions, architectural forms and eye-catching decorative patterns using ground-breaking techniques at their time.

At the south west of the ancient city, a royal citadel was built with surrounding walls and watch towers with a moat around it filled with water to make sure it’s well-protected. The mausoleum was also built inside this royal citadel section. The construction continued for almost 10 years and resulted in an architectural masterpiece in central and western Asia. 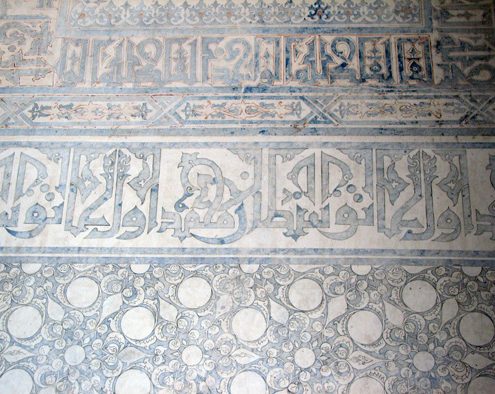 Obviously, like many other examples of Islamic architecture of 13 and 14 centuries, bricks and mortars have been the main construction materials used to build the monument. It’s built on a rectangular plan together with the spaces around the domed chamber. The space allocated to the domed chamber is in octagonal shape. Symmetry has been firmly observed in the construction. There are several ideas about the main and other entrances to this Mausoleum. Seemingly, there must have been three doors leading visitors to the inner part of the building. The floors have been treated with alabaster stone creating a clear white surface.

The double-shell dome is approximately 50 meters high with a diameter of approximately 25 meters. This indicates how heavy it is – 200 tons! Various sections of the structure have been joined to one another using dented wooden beams made from pine trees saturated with particular kinds of oil to make sure they could reduce the structure’s tension. The incredible fact about the structure is that its foundation is maximum 90 centimeters deep into the ground, not more. It has resisted against more than 300 earthquakes so far suffering some damages, but it still stands there with its entire splendor. 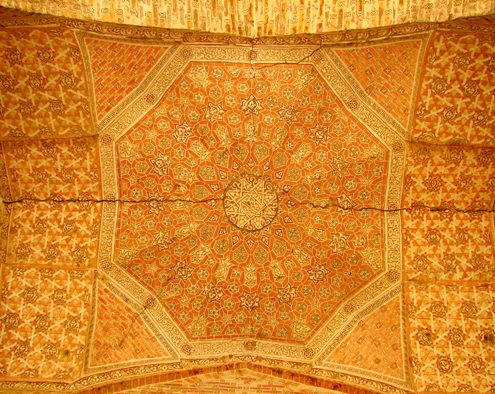 Plaster work decoration of the balcony under the dome at Soltaniyeh

On top of the octagonal structure, what you see from outside is a series of eight minarets standing at the corners of this 8-corner structure. The blue dome is shining inside the space surrounded by these minarets. You won’t see much decoration on the façade of the structure from outside. As a matter of fact, you will notice the magnificence of the monument when you visit inside the building. 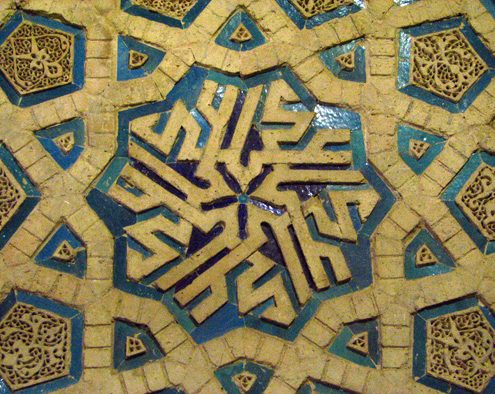 The Islamic arts used at this monument are of various forms. The decorative elements applied in Soltaniyeh Mausoleum are:

The interior walls have been largely decorated by plaster and glazed bricks. The fascinating inscriptions and motifs have been made with plasterwork. The ceiling of the balcony just under the dome, which can be seen from outside, has got unique orange-color plaster works in form of geometric and plants patterns and inscriptions. 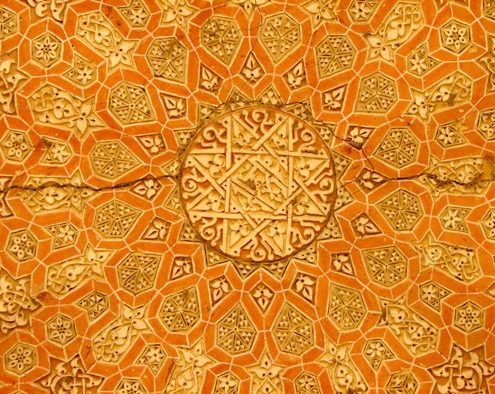 Orange-color decoration of Soltaniyeh balcony under its dome

There are religious inscriptions uniquely worked out in small and large sizes and particular scripts of kufic and Thuluth. Sometimes plaster has been used for this art and sometimes glazed bricks. The study of the content of these inscriptions indicates the political-religious developments of Oljayto’s ruling period.

Visit The Ancient Bam CityBisotun A World Heritage Site at Western Iran
Scroll to top
Need Help? Chat with us
Start a Conversation
Hi! Click one of our member below to chat on Whatsapp
The team typically replies in a few minutes.
farzaneh
Incoming Department