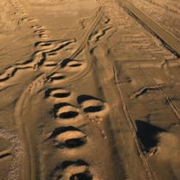 Qanat is a symbol of civilization, tradition and culture in desert regions with arid climate and an outstanding example of using architectural complicated systems in Iran. In fact, Qanat is a tunnel-like channel underground which collects water from a main water source naming “mother well” in order to conduct water along tunnels and finally enable settlement and agriculture. The place where the water of Qanat exits from the surface is named Mazhar.

There are Eleven Persian Qanats which represent the rest areas for workers, water reservoirs, and watermills; they are located in six provinces and have been registered as the twentieth cultural heritage of Iran, due to their unique technology, antiquity, architectural style, length and other characteristics:

Qasabeh Qanat in Gonabad city, Khorasan Razavi province: The oldest and deepest Qanat in Iran dated back to Achaemenid era.

Zarch Qanat in Yazd city, Yazd province: The longest Qanat in Iran with 100 km length, dated back to 2-3 thousand years ago.

Moon Qanat in Ardestan city, Isfahan province: The only double-deck Qanat in the world and the most surprising Qanat in Iran established about 800 years ago.

Akbar Abad and Qasem Abad Qanat in Baravat, Bam county, Kerman province: the twin Qanats full of water, with more than 100 years history, supplying the water of agricultural lands in the region.

Goharriz Qanat in Jupar city, Kerman province: dated back to Safavid period about 750 years ago.

Arg-e Kolah Farangi
Scroll to top
Need Help? Chat with us
Start a Conversation
Hi! Click one of our member below to chat on Whatsapp
The team typically replies in a few minutes.
farzaneh
Incoming Department