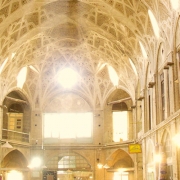 Arak bazaar, an enclosed complex in an old area and in the center of Arak, was built by Mohamad Yousef Khan Gorji Sepahdari in the early Qajar era in the Fathali Shah reign in 1228 HA. This bazaar had always been one of the economic and trade center of Carpet the main crops of this city, in the center of Iran (Sarouq Carpet) and the west of country. Arak bazaar has many stores for buy and sell, Timche (an enclosed place with a few shops), mosque, bath, cistern, passages, inns and historical school of Sepahdari (Imam Khomeini Seminary).

Bazaar architecture is interesting with domed arches and brick design on their facades. The bazaar domed ceiling is covered with cob and the inner surface of the dome has decorated by Rasmi Bandi style (a kind of Iranian architecture decoration) and bricklayer. There are two fantastic Chahar Souqs at the intersection of two major directions of bazaar; the Chahar Souq dome is the tallest and most massive domed roof. At the center of each dome, a trapdoor is embedded for corridor lighting and air conditioning. Nozari, Booksellers and Kashani corridors are the most important corridors in the bazaar.

How to take a taxi in Iran?

The Persian Qanat
Scroll to top
Need Help? Chat with us
Start a Conversation
Hi! Click one of our member below to chat on Whatsapp
The team typically replies in a few minutes.
farzaneh
Incoming Department