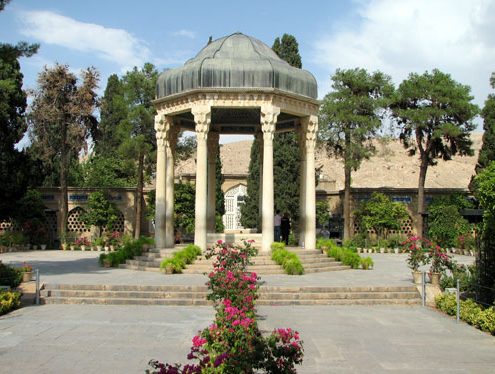 Mausoleum of Hafez in Shiraz, Iran

You should visit the mausoleum of Hafez if you go to Shiraz. Hafez is the 14th century poet of Iran who was born, lived and died in Shiraz. Iran was ruled by Ilkhanid era. Shiraz exceptionally escaped the devastation and massacre of foreign Mongol invaders. Yet, living was tough and difficult for the intellectuals who wanted to express themselves and criticize the ruling system. This led Hafez to use figurative language in his works, a feature that has added to the beauty of his poems.

Father of Hafez was a wealthy merchant who died and left him and his mother in poverty. Therefore, he had to work hard and spend some time working in a bakery. However, he proceeded in learning literature and soon proved his proficiency in composing Persian poems. Many were attracted to his poems and since then he’s considered the master of Persian ghazals and no one else has been able to create such literary works.

Despite all dreadful restrictions when nobody could violate from the authority rules, Hafez used his tactfulness and brought his ideas to the public in the language of poetry without being a victim of his bold action. This quality is called “Rendy” in Persian.  He mentioned several concepts of human life in his works, but one concept has always been continually present in his works – love.

The reputation of Hafez went beyond the borders of Iran and found some followers in India. Gute, the German poet was later inspired by him. When Hafez died, he was buried in the graveyard of Shiraz. That area has been the cemetery of the city. That’s why even today there are lots of graves in that area and some family tombs can be seen in the vicinity of the mausoleum of Hafez.

The Architecture of Hafez Mausoleum 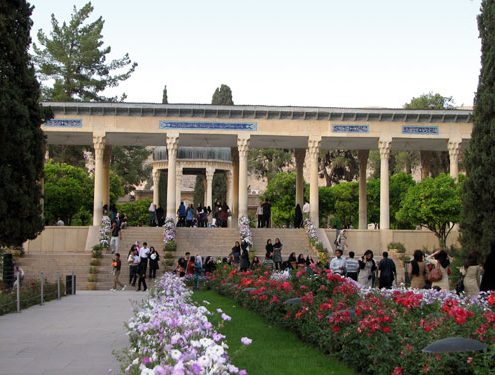 Under Karimkhan-e-Zand, a mausoleum was built to honor Hafez at his burial place with eight pillars supporting a roof made of copper. The ceiling of the mausoleum of Hafez  is decorated with mosaic works that shines in lively colors. This structure is located in a garden with family tombs on one side and a wall decorated by arches on the other side. Lots of flowers are planted and always kept in good condition by the organization in charge of maintaining the garden.

Under Reza Shah, the founder of Pahlavy dynasty, the last ruling monarchs of Iran, beginning with 1925, more redesigning of the mausoleum occurred. Andre Godard, the French architect was assigned the task of expanding and replanning the garden to make it more beautiful. As lots of visitors from inside and outside Iran go to this mausoleum everyday, more pace is needed. Therefore, the adjacent gardens have been connected through new doors recently to provide more space for the people.

A foundation of Hafez enthusiasts has got an office in the mausoleum of the poet. It’s located in a beautiful building to the west of the the main tomb. Together with the office of the mausoleum, this foundation hold exhibitions, provides information, etc to make this famous Iranian poet and poetry-related traditional arts more known to the public.

How Iranians Visit The Mausoleum of Hafez 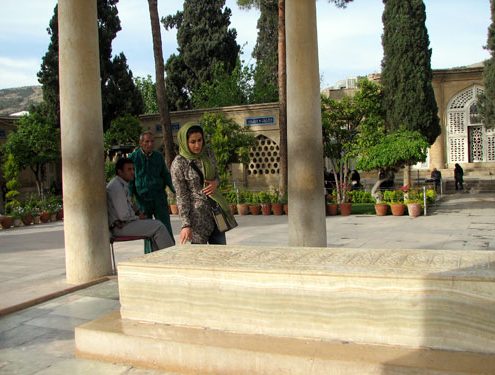 For Iranians, visiting the Hafez tomb is like going to a relative’s tomb. The feelings, of course, are more with respect than grievance. Some bring rosewater to wash the tombstone and put some flowers on the grave. Then, they touch the tombstone with few fingers praying by reciting a chapter of Koran to ask for blessing of his soul. Some proceed to request Hafez to talk to them through his poems and tell them about the state of their lives or give them some wise advice through the words in his poems. Then, they open their eyes and open the book on any page it randomly opens and continue to read it enthusiastically.

The concepts and topics mentioned in Divan-e-Hafez, his complete works, are so life-related and overwhelmingly attractive that one connects to them easily as if the poet is living at this time and offers us his wise words in a friendly manner to enrich our lives. That’s why man y love him and keep reading his poems on a daily basis.

Visit Alamout Castle | The Most Famous Assassins | Fortress in IranVisit Mausoleum of Saadi | The Persian Poet in Shiraz
Scroll to top
Need Help? Chat with us
Start a Conversation
Hi! Click one of our member below to chat on Whatsapp
The team typically replies in a few minutes.
farzaneh
Incoming Department