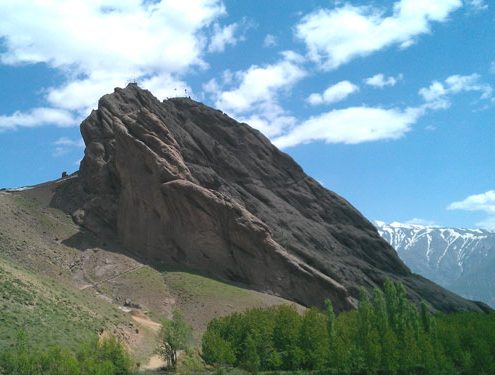 A trip to Alamout castle is full of wonders. It’s a hidden place among the high mountains of the Alborz, which assassins used as a stronghold for almost a couple of centuries to organize resistance against the foreign invaders occupying Iran. The incredibly hard terrain and location of the path to Alamout fortress had kept it from the eyes of the passer-bys.

You can only discover the genius choice of location and its marvelous architecture when you visit this Ishmaelite stronghold at the North East of Qazvin.

There are around 20 castles identified as Ismailis’ strongholds around Qazvin, where Alamout is located. Some local governors of the region, especially those known as the Alborz rulers, had used it as their own fortress. Hasan-e-Sabbah, the famous Iranian leader of Ismailis managed to make a plan to seize it without fighting or killing anyone. Therefore, it wasn’t built by him. First, he came to the area to work as a teacher and then found some allies inside the castle and via them, Hasan-e-Sabbah entered the stronghold and asked the previous owners to leave.

The constructional materials of this castle are bricks, gypsum, sarooj (traditional cement in Iran) and similar materials. It’s got four stories carved inside the rocks as well as several guard posts to have a good look over the valley. When you’re up there, you can see all around and beneath the hill. That’s why they call it Alamout – “Eagle’s Nest”.

If you plan to visit this site in Spring, April and May are the best times. If you go there in Fall, September and October are the best time. During these months, you can avoid the extreme heat or cold and there would less likely be any unpleasant weather conditions.

In Spring, when you drive toward this area, you will see the soft curves on the hills covered by natural grass creating a velvet-like scenery. The sunshine would also be pleasant and enjoyable. Coming from a polluted city like Tehran or other similar cities, you will certainly appreciate the huge amount of pure oxygen and astonishing landscape.

How to Reach Assassins’ Stronghold

Today, when you travel from Qazvin to Alamout, you have to cross high mountains and take hundreds of curves on a good road asphalted all the way for approximately 120 km. On the way, you will see the awesome mountains and difficult pathways the people had to take on the ancient times. You will wonder how they could make such a journey to find a fortress that isn’t easily noticeable.

On the other hand, because of the extremely cold winter time in this area, it’s unimaginable how people could survive in this remote place. You will find it amazing why they chose this location as a perfect hideout from which they planned and organized the hit-and-run missions.

You should bypass “Moalem Kelayeh” village on the way 20 km before getting to another village called “Gazorkhan”. From there, there’s few hundred meters to the foothill where the only pathway leads to the entrance of the castle. The interesting point is you get there and you cannot easily pinpoint where it is, because Alamout Castle is carved inside a huge rock that looks like every other rock on this mountain range.

This sub-branch of Shiites Islam is known as Ismailia that is historically known as assassins in the Western world. It didn’t originate in Iran. The followers of this belief had entered the political realm of other countries like Syria before Iran. The founder of this movement in Iran is Hasan-e-Sabbah who traveled to west Asia and North Africa and learned about them before coming back home.

He used to be a fervent Sunni Muslim arguing with Shiites first.  Then, he traveled to Egypt and Syria as a result of which he converted to Ismailism. The political situation of Iran and people’s living conditions under foreign occupation led him to take this idea very seriously and use his leading capability in organizing volunteers fighting against the enemies, Seljuks.

Ishmaelite movement in Iran is an example of a nation resisting against the foreign invaders’ oppression at home and how to cast fear in their hearts to create the feeling of insecurity in them. Iranians couldn’t mobilize an army to fight against Seljuks then. Therefore, the only way to show them they were not welcomed and should not feel at home was to assassinate their people in charge. This is the core of this movement and unlike the claims of other sources, young people didn’t attack officials to kill them in hope for getting to the heaven and enjoy paradise. Shiite Islam emphasizes on Martyrdom very much, but this was more of a political movement that naturally any nation may have picked as an inevitable method.

A Walking Tour of Shiraz in Half a DayVisit Mausoleum of Hafez the Persian Poet in Shiraz
Scroll to top
Need Help? Chat with us
Start a Conversation
Hi! Click one of our member below to chat on Whatsapp
The team typically replies in a few minutes.
farzaneh
Incoming Department