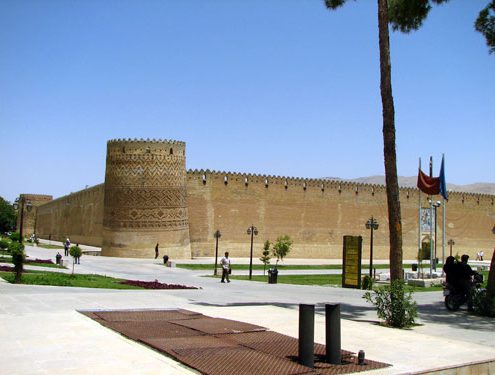 If you’re interested in walking and if long-distance drives have made you tired enough to long for a walking tour in Shiraz, you will enjoy this sightseeing excursion. It takes half a day and you visit 6 major sites before ending up in an enjoyable local restaurant where traditional food is served.

What I’m introducing to you at this post is the Zand Quarter that was initially built in the second half of 18th century when Karimkhan-e-Zand was ruling over most parts of Iran from Shiraz. This is the flourishing era of Shiraz when a lot was constructed and economy was thriving. The king, who preferred not to be called as such and named himself Vakil-o-Roaya (Attorney of Servants), had chosen to build a citadel in the heart of the city and ruled form there. So, you can begin your sightseeing from this spot.

When you’re taking your tour to Iran, you rarely come across such a thing as an old citadel of huge size and quality in the center of a city. This is a rectangular brick-made fortress with bastion at all its corners located at the North East of Shahrdary Square. Karimkhan used to live inside this structure and ruled from this point. The stronghold appearance of this arg may make you think of anything but a presidential palace, but it has actually been such a building inside for him.

Karimkhan’s residence has got a decorative panel of glazed tiles on top of its Eastern entrance depicting Rostam, the protagonist of Shahnameh, the epic poems of Ferdosy, Iranian poet of 10th and 11th centuries. It resembles fighting against demonic forces. Inside, you’ll find a garden with orange trees and four major sections in the middle of each wing. In addition, there’s a private bath at the South East of this large courtyard that’ worth a visit. 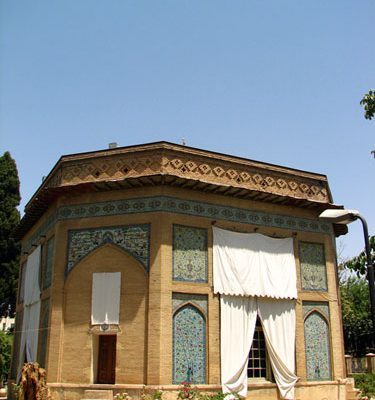 A View of Pars Museum Facade in Shiraz

Around Arg-e-Karimkhani, there is a little park these days and the pedestrians’ street, which is in fact a roof on top of an underpass for cars driving under Zand quarter. On the other side of this street and almost at the south of the citadel, there can be seen a mall but elegant octagonal building inside a garden called Nazar.

This mansion used to be called kolah farangy (foreign hat) building too, because it seemed to be like what people used to know as a foreign hat. It has been converted into what is called Pars Museum today.

Karimkhan used to meet with the dignitaries both inside and outside Iran who came to his court for official visits. Now, it is the exhibition of exquisite Qorans, lacquer-painted boxes, beautiful paintings, etc among other stunning objects that invite visitors to spend some time there to appreciate the art of Iranians. 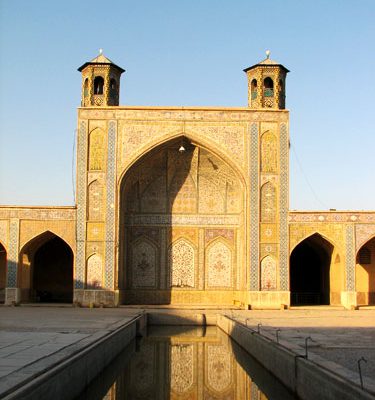 A View of Vakil Moque in Shiraz

Walking along the fences of Nazar garden toward East and a little before the main entrance to the bazaar, on your right-hand side, you will see a relatively broad street leading to the entrance of Vakil Mosque.

From far distance, it easily invites you to its colorful celebration of striking glazed tiles bearing beautiful floral patterns. After passing across a wide-open courtyard, you will enter the Southern Shabestan where a columned hall is hidden behind its tall entrance portal.

This hall is generously filled with pillars set in precise order and distance. They are so monochromatic that you will immediately notice the tiled ceiling leading you from the entrance to the mehrab. You won’t hues there’s such an elaborate mehrab and menbar (preacher’ seat) somewhere in this mosque when you were strolling at the courtyard. 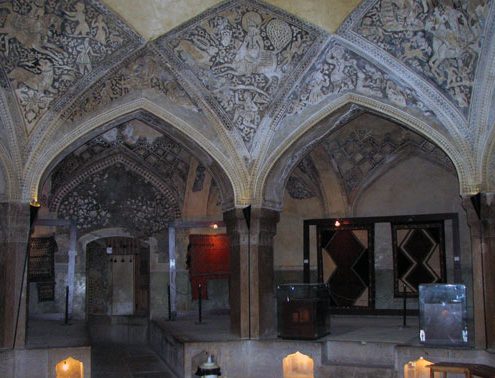 Inside Vakil Bathhouse in Shiraz during a Carpet Exhibition

This public bath is a few meters to the West of Vakil Mosque. You will find interesting architecture of Zand Era as well as tasteful decoration of cultural authorities of Shiraz in it.

The vax statues of people from all walks of life living during that period, tells you more about life in 18th century Iran. You will learn about different parts of a typical public bath as it used to be.

This bath used to had been converted into a restaurant and then an exhibition of Persian rugs. Eventually, it’s been decided to use it as a museum in which traditional bath ambiance is introduced.

Just go back to the main street where you were walking from Pars Museum toward East and walk a bit further on the same direction to get to the main entrance of the bazaar. You will reach a point where on both Northern and Southern sides of the street, you will find entrance to Shiraz bazaar. Which one is the more exotic for most of the visitors? The Southern one does. It’s got very colorful shops and aromatic atmosphere thanks to the herb shops at the beginning of its passageway. The Northern one is the section where most of the local people go to for shopping necessary items of an ordinary lower middle-class family. It has its own charm as well. If your time allows, you may want to explore this one as well.

You will be amaze by the fascinating high-arched ceilings of Vakil Bazaar at the Southern section. Soon after you enter, there’s a chaharsoo, a dome with four directions underneath. It gives you an idea of the passageways crossing the main one offering similar items, workshops, warehouses, etc. Proceed to the end of this passageway and you will see dozens of fabric stores selling glittering materials usually Qashqai nomads go to Shiraz to buy to make their traditional costume.

At the end, turn left and walk less than 10 meters to find an entrance on the left that leads to the astonishing set of stores offering Iranian traditional handicrafts from carpets to enamel works, from inlaid wood-works to copper-made items, etc. This colorful place I called Sara-ye-Moshir.

This section is an impressive part of the bazaar easily distinguishable for its charming tile works and the pool in the middle of its courtyard. Several types of handicrafts from Fars province can be found here.

This is a traditional restaurant inside Sara-ye-Moshir. The ambiance and decoration are like Iranian teahouses in the past couple of centuries. Traditional food is served including kebabs, stews as well as Dizi, traditional broth. The food is delicious and your dining experience will keep you in the same traditional mood of the past. You may feel you eat during Zand period!

This walking tour is very appealing to most of the foreign travelers. You will enjoy it and feel you’ve seen plenty of Iran in the 18th and 19th centuries. You will be immersed into the local culture so much that you may forget this country has changed! I’m sure you will get a strong impression of the pat as well as today’s traditional Iranian lifestyle. So, take this walking tour of Shiraz in half a day and get acquainted with what’s out there.

A Walking Tour of Esfahan in Half a DayVisit Alamout Castle | The Most Famous Assassins | Fortress in Iran
Scroll to top
Need Help? Chat with us
Start a Conversation
Hi! Click one of our member below to chat on Whatsapp
The team typically replies in a few minutes.
farzaneh
Incoming Department