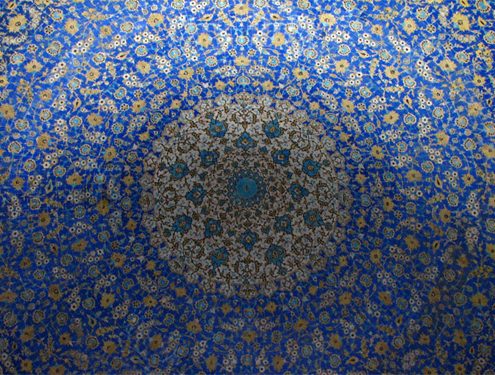 Isfahan is certainly one of the most-liked destinations inside Iran among foreign travelers. A walking tour of Esfahan in half a day will surely make you familiar with the ambience of traditional Iran and some of the most awesome monuments of this beautiful city. This is going to be a visit in and around Imam Khomeini Square formerly known as Naqsh-e-Jahan (image of the world) with several tourist attractions.

If your purpose of traveling in Iran is to learn about the highlights of the Islamic architecture together with bazaar, Handicrafts, garden planning as well as people, this walking tour of Esfahan is for you. It will take half a day, but will impress you with the varieties and utmost examples of Islamic architecture in Iran. 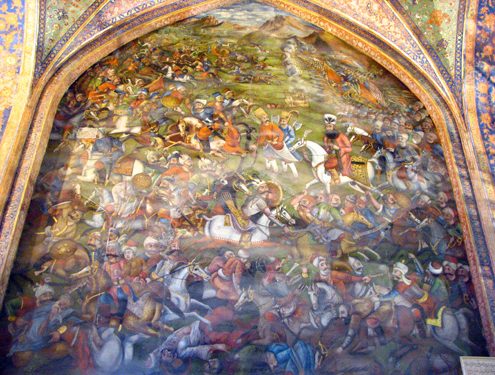 This royal building is located outside the mentioned square, but in a short distance from it. Make sure you begin with it first in the morning. When you enter the garden in which this palace is located, you will see the front of the building opposite the entrance. Chehel Sotun means forty columns and it refers to the number of columns in the portico of this structure in addition to their corresponding reflections in the water of the large pool in front of it. Such reflection can only be seen in the morning as the building looks at the East. Besides, forty is the number of abundance in Iranian culture.

Chehel Sotun in situated within a Persian garden with tall trees, beautifully kept lawn and flowers and surrounded by fences, previously walls.

Around the middle of the 17th century, Shah Abba II ordered this administration structure to be constructed so that he could use it as his office to meet with people and address his audience indoors as well as outdoors whenever required.

Probably the most outstanding decoration you will see at this palace will be the six huge mural paintings inside showing how Safavid kings protected their power and received other kings and governors. At the lower parts of the walls, there can be watched a series of Iranian miniature paintings depicting mostly courtiers, kings and nobles having a drinking party inside Persian gardens.

On the exterior sides of the palace and close to the back of it, you will see clear influence of European arts of 17 and 18 centuries practiced by Iranian Artists of that era.

There’s only a small park distance between the palace and Imam Khomeini Square. You cross this green area in less than 10 minutes and find yourself in an overwhelming large square that has accommodated hundreds of stores among three major monuments from 17th century. Shah Abbas I, who moved Safavids’ capital city from Qazvin to Esfahan, started this royal project at a virgin ground where no other structures were in place. This 160 by 500 meters open space was the showcase of the king’s flourishing economy and dedication to Shiite Islam.

The three main monuments around the square are Jame Abbasy Mosque (today known as Imam Khomeini Mosque), Sheikh Lotfollah Mosque and Aliqapoo Palace. It took various time periods for them to be completed, but all of them started to be constructed more or less around the beginning of 17th century. Today, UNESCO recognizes this square as World Heritage Site and the absolute majority of international travelers love to visit it time and again. It’s beautiful in the morning, but many also love it in the evening with illumination around the monument as well as shops’ window lights. 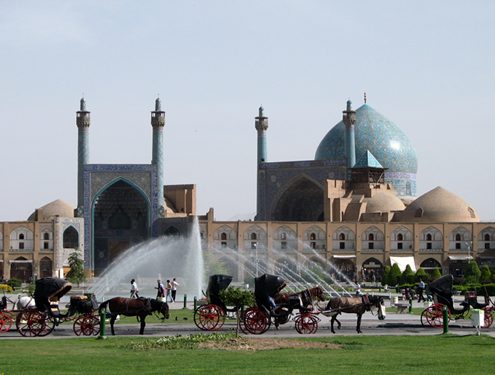 A View of Imam Khomeini Mosque in Isfahan

As both mosques are used as monuments and active worshiping places, you are recommended to visit them first and go to the palace later. Imam Khomeini Mosque is located at the Southern part of the square. Although Esfahan had its Friday mosque prior to the construction of Jame Abbasy, Shah Abbas decided to build his royal temple here. The beauty of this mosque is breathtaking and you will see the ultimate expertise of Iranian architects at the time of creating this mosque.

Plenty of lapis lazuli and turquoise tiles as well as exquisite inscriptions done by Reza Abbasy, the well-known artist of Safavid era are some of the unique characteristics of this monument. The spacious courtyard with four eyvans leading to roofed areas of the mosque are marvelously decorated inviting visitors to enter and enjoy the serenity of the temple.

This mosque has got four minarets and two symmetrically SE and SW of the courtyard used as madrassa. Another section at NE was used for treating the corpse of Muslims before transferring to graveyard.

Next Is Sheikh Lotfollah Mosque 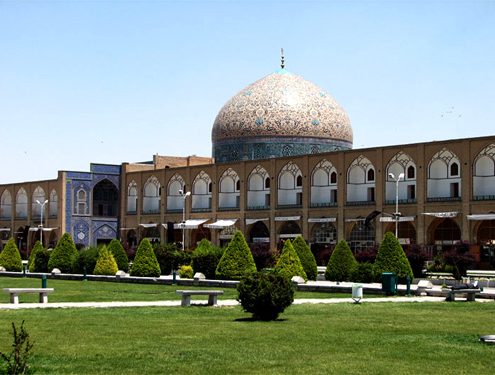 A View of Sheikh Lotfollah Mosque in Esfahan

This mosque is named after the father-in-law of Shah Abbas I. The fact that it doesn’t have any minarets and doesn’t provide a large space for worshipers approves the reality that it was built to be used by the royal family members. They could spend their time on contemplation and worshiping God in a quiet place without any disruption.

The buff color of its dome as well as beautiful inscriptions worked out by mosaic work and exclusive motifs and decoration style of the interior have all contributed to the uniqueness of this mosque.

You should remember to complete the visit to this building before the noon prayer as it will be closed to visitors and only worshipers can get in at that time.

The Last Monument to Visit Is Aliqapoo Palace 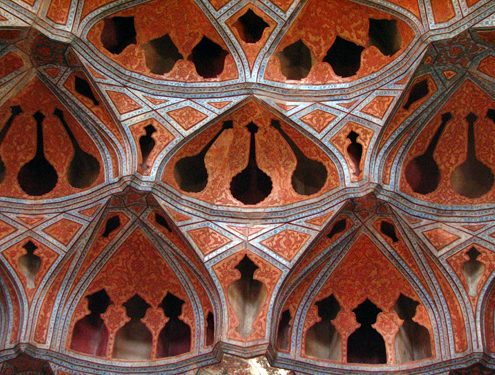 Shah Abbas I had included his residence and office to this square at the Western side. The tallest building of the square with a portico overlooking the square is Aliqapoo palace. This massive building has been standing for approximately 400 years without a steel structure. Of course, in recent decades efforts have been made to reinforce it to make sure it will stand the passage of time and weight of its upper floors.

On the sixth floor of this palace, there are some connected private rooms for the royal family who could enjoy the music played live for them. Therefore, the decoration is very unique making sure no echo could create distortion for the audience listening to musicians.

At the portico of this palace, you will have best view of the entire Imam Square and the other monuments as well as the Mount Soffeh at the South of Esfahan.

By this time, you have covered the magnificent Chehel Sotun palace and the main sites of the square. It’s time to dine and you can choose either one of the restaurants inside the square or take other choices outside the square.

Most of the shops will close down in the middle of the day and it will not be very useful to spend your time there during siesta time. Thus, you may prefer to take some rest or get involved in other activities. Later in the day, you can come back to the square and explore its workshops, handicraft stores and so on.

Such half-day walking tour of Imam Square in Isfahan is unbelievably rich experience that will impress you for the rest of your life.

3 Reasons Why Hiring Iranian Silent Guide Isn’t a Great IdeaA Walking Tour of Shiraz in Half a Day
Scroll to top
Need Help? Chat with us
Start a Conversation
Hi! Click one of our member below to chat on Whatsapp
The team typically replies in a few minutes.
farzaneh
Incoming Department