Ancient Persians have always been well-known for the ways they had treated water, supplied it, preserved it, harnessed it, transferred it, redirected it and distributed it. Water management in a geographical location where it cannot be found abundantly all year round is a challenge by itself. It represents the determination of a nation to survive and thrive.

There are different water-related structures and facilities that are still there in Iran for the Iranians as well as foreign travelers to visit and appreciate how mater has been managed for centuries in this country. I am going to introduce some of them here so that you can have a general picture about them.

In a different post about Kariz (Qanat), I’ve explained how interesting this system is. In principle, ancient Persians, who arrived in Iranian plateau after migrating from Caucasus mountains around 3000 years ago, settled in south and central Iran. These two areas are the places where we have most of such water management instances. Kariz is an underground aqueduct dug by shovel and spike through all sorts of soil and rocks to transfer water from high mountains located tens of kilometers away from the human settlements that have no easily accessible sources of water.

People did not leave their territories for discovering better living conditions. Instead, they invented this system using natural resources and laws to let water flow in man-made water channels in a smartly-devised gradient and run down the ducts for long distances to bring life to villages and towns. Up to this point, water has been transferred. Now, it’s time to harness the power of flowing water and preserve it. 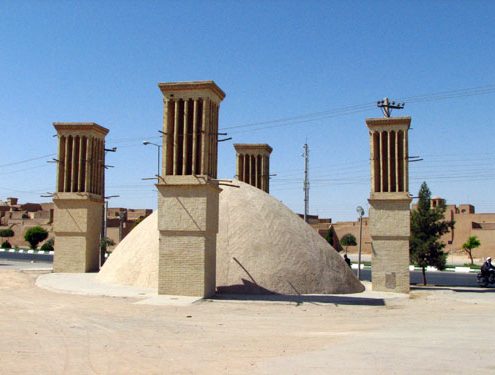 Huge underground tanks were built and insulated using traditional cement called Saruj for keeping the water that had arrived in a village after a long journey. Such structures are called Ab Anbar in Farsi, meaning water storage. There are two openings, one inlet and one outlet, at two sides of such structures at slightly different elevations.

Water was filling these tanks from one side and leaving them on the other. So, there was always a constant flow of water. It was never still. That’s why it could always be kept fresh and drinkable. Besides, the other vernacular energy-saving invention of Persians, Badgir (wind catcher), was implemented in these water reservoirs. At least a couple of them were constructed at both sides of such tanks and a dome covered the top of the tanks.

Badgirs let the air blow in from one side and out from the other. So, water was always exposed to fresh air too. A piece of salt rock was also thrown into the water to make sure it keeps water clean. Some other openings were worked out to have the light in as well. I’ve explained these structures at vernacular structures of Iran. You can read it to learn more about them. 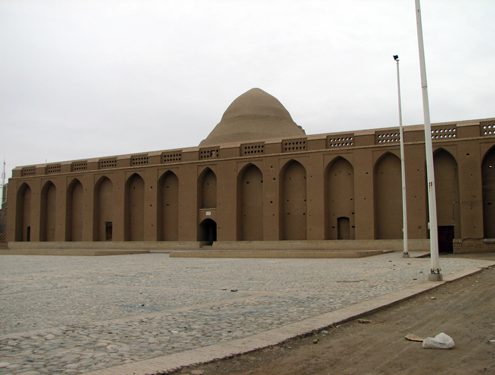 People loved to have something icy cold in the hot summer time. Although central Iran and eastern part of it was not so arid at the time when people started devising such systems for water management in ancient Persia, very warm climate demanded having some ice and icy refreshment to make and consume in  summer time.

Desert nights were quite cold and water could freeze. This is exactly what people needed to make ice out of water in ditches or pools next to a wall adjacent to a large mud-and-brick dome covering a huge storage underneath. Every night ice was made and the next day the wall cast shade when the ice needed to be preserved in a cool place. The ice made as such could be kept in such structures until the end of summer due to the efficient insulation system planned for ice-houses. 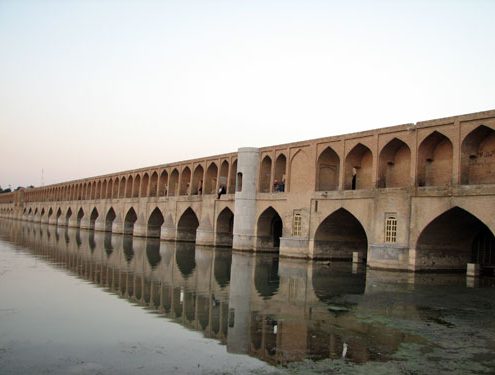 The oldest remnants of bridges trace back to Sassanian period, 3rd to 7th centuries. They are so strongly built that are still partially standing despite all the forcefully flooding events slapping them for centuries. Most of these bridges have been constructed on very powerful rivers at the south west of Iran. The main material contributing to the solidity of these structures was Saruj, the same traditional cement I referred to above.

There were arches built on top of the Saruj-made foundations with flat roofs on the very top of all the structure. These flat surfaces were connecting ancient roads on one side of the river to the other. The empty spaces between arches and below flat tops created enclosed areas as shelters or shady spots, which could sometimes function to let more raised water to go through and help the entire structure resist against the current.

Stone, rubble, pebble and bricks were glued to one another using Saruj. Once hardened, this locally crafted mixture turned into a hard rock-solid cliff-like wall making its presence felt in the powerful stream of water. Thank to this technique ancient Persians have invented to construct bridges in Iran, we can now view and study another aspect of water management in ancient Persia.

What’s left from those ancient water dams indicate the rigidity of the structures they could make and install in those big rivers of Iran blocking the water and using this source of life for agriculture by redirecting them into the farming fields. The same local constructional materials referred to earlier were made use of for building such structures.

Basically, the purpose beyond building some of the bridges in Iran had been to make it possible for the caravans and people cross those rivers while it had been planned to raise the level of water for other purposes like irrigation.

In some cases, even before Sassanians, Persians had redirected part of the water in large rivers to transfer it to agricultural fields by making some water channels. In Shushtar, where you can see several such water management examples, Nahr-e-Dariun is a witness to such skillful  planning.

Water Mills to Harness the Power of Water 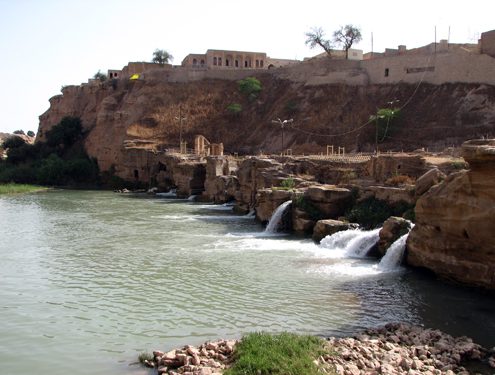 Shushtar and Dezful are two great examples of how proficiently people had brought the flowing water under control to use them for operating the mills either in the course of water inside rivers or inside the chambers dug into rocks. Such forceful streams of water could operate the mills for grinding wheat or other grains farmers produced.

In Shushtar, a water dam had been built to redirect the course of water from Karun river into a huge lime rock. Several tunnels had been carved into this rock to lead the water coming from a man-made river into them to turn the turbines and operate the mills.

Are these methods useless today? Are these structures obsolete? Are we so advanced in 21st century to say good-bye to them? You can visit Iran and go to these sites to explore the realities on the ground and learn about the fascinating passion for life in this country.

Get to Know the Life under the Skin of Iranian BazaarsReligions in Iran
Scroll to top
Need Help? Chat with us
Start a Conversation
Hi! Click one of our member below to chat on Whatsapp
The team typically replies in a few minutes.
farzaneh
Incoming Department