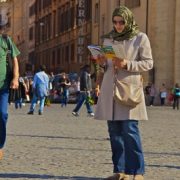 What are the problems of Muslim tourists?

Fear of misconduct, misconceptions and inappropriate behaviors of other people will always create stress for Muslim tourists.During the journey, Muslim tourists must always wait for some of the problems and concerns that may occur to them.

Nowadays, with the expansion of social networks and media, Muslims are more and more exposed than ever.There are a lot of differences in the news and the dealings with them.
Conflict of thought and culture, especially in European and American societies with Muslims, has created different and almost negative opinions and opinions about them around the world.The issue that has been spoken today, are Muslim tourists.

Like other tourists, Muslims are also interested in traveling,experience new things and communicate with different tribes and cultures.Despite the current stressful life, traveling is the right of all human beings.But Muslims face more problems than other tourists.

Anxiety and stress are the main concerns of every Muslim tourist.There have been many reports of mistreatment of Muslims in different countries.Many people express their hatred towards Islam in their dealings with Muslims”Nonetheless, there are people who are well and completely affectionate with Muslim tourists”.

Traveling with airlines is one of the main problems of Muslims.
Because of security issues, the Muslims are treated more severely than other tourists.Airlines usually provide all the comfort of the flight and excellent facilities for passengers, But they never seek to provide peace of mind to travelers.Mental relaxation in air travel is one of the main concerns of any Muslim.Because they are subject to a lot of security inspections and stress is created for them.
Usually, packages of Quran, Sajda(The carpet for saying pray), Mohr(Special stone for prayer), and religious books in Arabic are also suspected for airport security officers.

These stresses are so pressing on Muslim tourists that, even if they can not book tickets because of systemic errors, they think the problem is related to being Muslim.Checking Muslim tourist documents at airports is generally longer than any other tourist, and this can be repeated several times.Also, traveling to the Middle East will bring a lot of trouble for them, and many security questions will probably be there.

Families of Muslim tourists will be under stress and anxiety.Because these people are always afraid of security issues.
Other Muslim troubles tourists are the telephone conversations because saying hello in Arabic can create a tumultuous atmosphere among the people around them and lead to repression and mistreatment.

Another Muslim problem is the saying of daily prayers.Usually, Muslim tourists can hardly find a mosque to read their prayers,
due to the wrong reactions of the people, they can not worship in public places or in the street.For this reason, most of them use the Fitting room in shops to say their prayers.

Another Muslim problem is the lack of halal foods.For this reason, most Muslim tourists seek destinations that have halal shops and restaurants in determining their destination.Or they try to be herbivorous during their trip.

Some recreational activities are also not suitable for Muslims.Muslim women can not use recreational facilities such as seas, like other travelers.

Choosing the best time to travel is another problem for Muslim tourists.During Ramadan, traveling to other countries is a religious problem for them, or because of some festivals that conflict with the religion of Islam, they generally try to postpone their travel time.

Muslim tourists should check everything that may be problematic for them before traveling and select a destination that has the least trouble for them.

The most historic monuments of Iran

An innovative approach in music tourism
Scroll to top
Need Help? Chat with us
Start a Conversation
Hi! Click one of our member below to chat on Whatsapp
The team typically replies in a few minutes.
farzaneh
Incoming Department