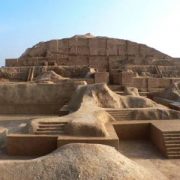 The most historic monuments of Iran
If Iran’s history is divided into three part,  prehistoric periods, ancient Iran and Islamic period.The temples of Choghazenbil, Persepolis and Jame Mosque of Isfahan are the best of the architecture of this era.

Dur Untash or Chogha Zanbil an ancient Elamite temple in the Khuzestan province south of Iran. It is one of the few ziggurats outside of Mesopotamia. It is about 30 km south-east of Susa and 80 km north of Ahvaz.In 1979, this structure was the first Iranian monument to be listed on the UNESCO World Heritage List.
The ancient city of D?r Untash or the historic site of Choghaznbil in the 13th century BC was built by “Ontas Nepirisha”, the king of Ilam.
The “ziggurat” is an Akkadian name used in Mesopotamia and Ilam for temporal temples.
The Chogha Zanbil ziggurat has a square shape with a length of about 105 meters.This building is made entirely of bricks and mud and sometimes baked bricks.The temple was built on seven floors, which now has 5 floors.The monuments were decorated with glazed bricks, gypsum, and ornaments of faience and glass.
Thousands of baked bricks bearing inscriptions with Elamite cuneiform characters were hand-engraved.Glazed terracotta statues such as bulls and winged griffins guarded the entrances to the ziggurat.
Orientalists consider this building the first religious building in Iran.

Takht-e-Jamshid or Persepolis the capital of Achaemenid Empire(550–330 BC) is located 80 Km from Shiraz city in Fars province.It exemplifies the Achaemenid style of architecture. UNESCO declared the ruins of Persepolis a World Heritage Site in 1979.In 518 BCE, the construction of Persepolis began as the new capital of the Achaemenids in Pars.The founder of Persepolis was great Darius, after whom his son Xerxes and his grandson, Ardeshir I, expanded to expand it.Historians believe that Alexander the Great, Macedonian commander in the 330 BC, invaded Iran and set fire to Persepolis.The Sassanid kings also have inscriptions on Persepolis at Tacher Palace.After the entrance of Islam to Iran, they also considered this place worthy of a thousand pillars or forty minars, and linked them with characters such as Suleiman Nabi and Jamshid.
Another historical monument related to the Achaemenid is Naghsh-e-Rostam.These Achaemenid temples are located 6 km from Persepolis.The Naghsh-e-Rostam includes the shrines of the kingdoms like Darius the Great / Xerxes / Ardeshir I and Darius II.

This mosque is one of the most important and oldest religious buildings in Iran.The Mosque of Isfahan is a reflection of Byzantine and classical art in the form of a traditional Islamic building.This mosque is a complete collection of Iranian architecture from the early Islamic centuries to the Safavid era.This mosque is a collection of the best of Iranian architecture that includes the most beautiful tile, the most beautiful Minbar and the most magnificent altar.The mosque has 4 Ivans and 8 entrances, each of them has been constructed in different periods of history.The four porch of the mosque identifies the method of Iranian mosques, which has become popular in other mosques after its construction.The entrances around the mosque indicate the extensive connection of the mosque with the old urban fabric.

It is one of the oldest mosques still standing in Iran, and it was built in the architectural style of four-iwan, placing four doors face to face. An iwan is an open vaulted room. The qibla iwan on the south side of the mosque was vaulted with muqarnas in the 13th century.

What are the problems of Muslim tourists?
Scroll to top
Need Help? Chat with us
Start a Conversation
Hi! Click one of our member below to chat on Whatsapp
The team typically replies in a few minutes.
farzaneh
Incoming Department