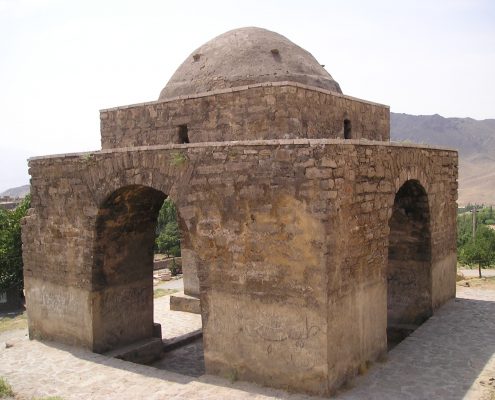 Calendar Building in form of a fire temple, Niasar, Iran

The very precise Iranian chronometry started at Nimrooz (meaning half of day), SE of Iran, on 62 degrees E meridian, at the 6th of April 1725 B.C. It is called Nimrooz, because thousands of years ago ancient Iranians knew when the Sun was setting in the east and rising in the west it was noon at Nimrooz.

The surprising point is the fact that this chronometry, which was carried out more than 3700 years ago, complies precisely with today?s calculations in mathematics and physics.

We are now sure that chronometry had first been lunar. Later it became solar lunar in which years were solar and months were lunar.

Some say that Iranian chronometry calculated based on solar & lunar methods has been derived from Babylonia. Some say it has nothing to do with Babylonia and is independently Iranian. But the chronometry performed in 1725 B.C. is a solar-based one referred to as Old Avestan Chronometry (OAC) and the one that started during the reign of Darius is called New Avestan Chronometry (NAC).

The calculation of the leap year in NAC was very difficult and needed corrections. So 10 years after the advent of Islam when Yazdgerd III took power in Iran, he ordered NAC to be changed into a new method, called it Yazdgerdy calendar and stepped up to the throne on the first day of the first month of that year.

After the collapse of Sassanians by Arabs many Zoroastrians emigrated to India and Pakistan. They are still using Yazdgerdy calendar for their private activities and the official calendar of the country for other works.

OAC is one of the wonders of science beginning almost 40 centuries ago. Without any sophisticated instruments, the genius people of the time could work out a precise calendar. To examine the solar beams of light and their shades for chronometry, they had built special buildings through which the 62 degrees E meridian was passing. In ancient world, Nimrooz was the indicating base of chronometry.

Zarathustra is also said to have observed in this observatory and a small structure near that building is believed to be his tomb according to local people.

In addition to these structures, there are many other ancient structures used as observatories like Chogha Zanbil ziggurat near Susa and Zarathustra?s ka?be (cube) near Persepolis. Also some believe that tens of other structures believed to be holy buildings, fire temples (called Chahar Taqy meaning four-arched building), had been used as calendar buildings.

According to OAC, time is divided as follows:

There are 2820-year periods. Each period consists of:

It was 29 centuries later when Omar Khayyam, the famous Iranian poet and mathematician understood this calculation and wrote it down.

Since Jalal-ed-din Malek Shah had ordered a precise calendar to be regulated it was called Jalaly calendar. So the origin of the present Jalaly calendar in Iran goes back to the calculations in 1725 B.C, which is the most precise one in the world, according to contemporary scholars.

Games in Iran Ceremonies in Iran
Scroll to top

Chronometry in Iran
Accept settingsHide notification only
Need Help? Chat with us
Start a Conversation
Hi! Click one of our member below to chat on Whatsapp
The team typically replies in a few minutes.
farzaneh
Incoming Department
Faranak
Incoming Department
I will be back in 1:51