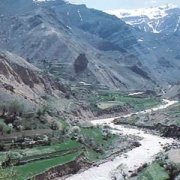 major mountain range in northern Iran, 560 miles (900 km) long. The range, most broadly defined, extends in an arc eastward from the frontier with Azerbaijan southwest of the Caspian Sea to the Khorāsān region of northeastern Iran, southeast of the Caspian Sea, where the range merges into the Ālādāgh, the more southerly of the two principal ranges there. More commonly, however, the westernmost part of the range is called the Talish (Talysh, Talesh, or Tavālesh) Range, or the Bogrov Dāgh. The Elburz Range, in its strictest sense, forms part of the central stretch of the chain, which also includes Iran’s two highest peaks, Mount Damāvand and Mount Alām. The Elburz mountain system traverses virtually all of the northernmost portions of Iran from east to west. 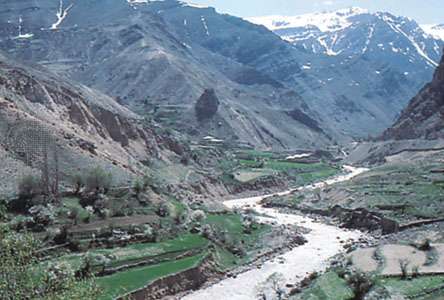 The Elburz chain is not as truly alpine (i.e., resembling the European Alps) in its structure as is often suggested. On the one hand, continental conditions regarding sedimentation are reflected by thick Devonian sandstones (about 360 to 415 million years old) and by Jurassic shales containing coal seams (about 145 to 200 million years old). On the other hand, marine conditions are reflected by strata dating to the boundary of the Carboniferous and Permian periods (about 300 million years old) that are composed mainly of limestones, as well as by very thick beds of green volcanic tuffs and lavas. Orogenic (mountain-building) phases of importance date from the Miocene and Pliocene epochs (between about 23 and 2.6 million years ago). Over large areas they produced only a loose folding; but in the Central Elburz a number of folds were formed into blocks thrust mainly southward but in places northward, with cores made of Paleozoic rocks (more than 250 million years old). Structurally and topographically, the Elburz system is less clearly defined on the southern than on the Caspian (northern) side of the chain, since various off-branching elements interconnect it on the southern side with the adjoining Iranian plateau.

The Western Elburz Range runs south-southeastward for 125 miles (200 km). Varying in width from 15 to 20 miles (24 to 32 km), it consists of a single asymmetric ridge, the long slope facing the Caspian. Few of its peaks approach or exceed 10,000 feet (3,000 metres) in height. There is a low pass west of Āstārā, near the Azerbaijan frontier, 5,000 feet (1,500 m) above sea level. The Safīd River, formed by the junction of the Qezel Owzan (Qisil Uzun) and Shāhrūd rivers, is the only river to cross the whole width of the chain: its gorge, giving access to the low pass of Qazvīn, offers the best passage through the mountain chain, although by no means an easy one, between the Gīlān region on the shores of the Caspian and the inland plateau to the south.

The Central Elburz is 250 miles (400 km) long. East of the longitude of Tehrān, which lies to the south of the range, it reaches a width of 75 miles (120 km). Located among the longitudinal valleys and ridges of the range are some important centres of settlement, with the towns of Deylamān, Razan, Kojūr, and Namar located on the Caspian side and Emāmshahr (formerly Shāhrūd), Lār, Damāvand, and Fīrūzkūh on the southern side. There are likewise many gorges, by which the rivers find their way down one or another of the slopes. Only two passes allow a relatively easy crossing in a single ascent—those are the Kandevān Pass, between the Karaj and the Chālūs rivers, and the Gadūk Pass, between the Hableh and the Tālā rivers. The main divide runs generally south of the highest crest, which—with the exception of the towering and isolated cone of the extinct volcano Mount Damāvand (18,386 feet [5,604 metres])—culminates in the glaciated massif of Takht-e Soleymān, which rises to more than 15,750 feet (4,800 metres).

The Eastern, or Shāhkūh, Elburz runs about 185 miles (300 km) in a northeasterly direction. Since two ranges branch off on its southern side and no compensatory elements appear on the northern side, its width dwindles to less than 30 miles (48 km). With the exception of the Shāhkūh Range proper (which reaches an elevation of 12,359 feet [3,767 metres]), the chain decreases in height toward the east. Longitudinal valleys are found less and less frequently east of the Shāhkūh. There are several passes at low elevations.

The Caspian and the inland, or southern, slopes of the Elburz differ markedly from each other in climatic and vegetational aspects. The Caspian slope has a distinctly humid climate, thanks to northerly air movements, enriched with moisture from the sea, which collide with the steep faces of the mountains to cause precipitation. The precipitation amounts to more than 40 inches (1,000 mm) annually in the lowlands of the Gīlān region and is even more plentiful at higher elevations. Although it decreases toward the east, it still suffices to nourish a humid forest for the whole length of the chain on the Caspian side, where the soils are mostly of the brown-forest type. The natural vegetation of that slope grows in distinct zones: the luxuriant Hyrcanian forest on the lowest levels; a beech forest in the middle zone; and a magnificent oak forest from the elevation of 5,500 feet (1,700 metres) up to the levels where gaps in the divide allow the moist air to overflow into the inland basins. In some sheltered valleys there are extensive stands of wild cypress. Sheltered valleys adjacent to the Safīd River constitute the only olive-growing areas of note in Iran.

The southern slope of the Elburz, by direct contrast, shares the arid character of the Iranian plateau. Annual precipitation varies between 11 and 20 inches (280 and 500 mm) and is very irregular. The soils are mostly of the type associated with steppe (treeless, grassy, or shrubby) vegetation. The slope has become even more steppelike ever since the almost complete destruction of its original dry forest of junipers.

The Hyrcanian tigers for which the Caspian forests were famous are now extinct, but other wild cats, such as the leopard and the lynx, are still numerous in the Elburz. The bear, the wild boar, red and roe deer, the mouflon (wild mountain sheep), and the ibex are also present. Eagles and pheasants are notable among birds.

Although large areas of the Elburz Mountains are almost uninhabited—some being occupied only by nomads and others having been depleted by Turkmen raids in the 19th century—there are still several well-settled districts, including Deylamān, Alāmut, Tālaqān, and Lārījān (at the foot of Mount Damāvand). The landscape of the Caspian slopes is characterized by forest clearings with shingle-roofed loghouse villages and by lush fields and pastures. The landscape of the inland slopes is of the oasis type. Extensive grain cultivation occurs on both slopes, and cattle raising occurs on the Caspian side. Alpine pastures, seasonally dotted with flocks of sheep, cover an extensive zone yet higher. The land-distribution pattern prevailing in the Elburz includes a high proportion of peasant ownership. The holdings often are much-fragmented.

Many of the traditional ways of livelihood of the mountaineers, including charcoal burning (now prohibited because of devastation of the forests), the transportation of goods (especially of rice and of charcoal for Tehrān) by pack animals, and the working of hundreds of small coal mines, have been displaced by the 20th-century modernization of Iran.

The wild (natural or original) forests of the Elburz Mountains cover more than 8,000,000 acres (3,000,000 hectares), of which some 3,000,000 acres can be exploited commercially for timber and other wood. There are also a few modern coal mines, as well as some deposits of iron and other ores. But most important is the water of the rivers, which is used for irrigation, for generating hydroelectric energy, and for supplying the fast-growing Tehrān. Spectacular dams have been built. Those include the Safīd Rūd Dam, used for the irrigation of the Safīd Rūd delta; the Karaj Dam and the Jājrūd Dam, used mainly for supplying water to Tehrān and partly for irrigation; and a series of dams on other rivers of the Māzandarān ostān (province) also used for irrigation.

A Trekking Guide to Mount Damavand

Tochal Ski Resort
Scroll to top
Need Help? Chat with us
Start a Conversation
Hi! Click one of our member below to chat on Whatsapp
The team typically replies in a few minutes.
farzaneh
Incoming Department