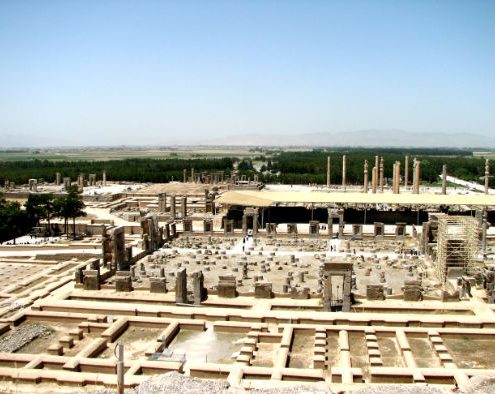 Genral View of Part of Persepolis

One of the best-known and glorious sites of ancient world, Persepolis, is located in the plain of Marvdasht, about 75 km northwest of Shiraz. It was one of the dynastic centers in Achaemenid era. UNESCO has registered this impressive manifestation of Achaemenid architecture at the list of World Heritage Sites in 1979.

In about 518 BCE, Darius the Great ordered the construction of a palace complex on a platform at the foot of a mountain called Kooh-e Mehr (Mount Mithra). Subsequently, the structures were extended by Darius’ Successors, Xerxes and Artaxerxes I. The whole platform covered an area of about 125,000 square m. This complex consist of ceremonial palaces, provisional residential palaces, a treasury, and a chain of fortification.

There is a wide-ranging debate on the function of Persepolis. Many scholars believe Achaemenids have built it as a ceremonial palace complex mainly for celebrating Nowruz, the Persian New Year festival. Others deny any evidence of celebrating Nowruz in Achaemenid period, and therefore, at Persepolis. Some scholars, on the other hand, see the site as a manifestation of royal power, or think of it as a political, economic, and administrative center of the empire.

The palaces and their annexes of the site benefited from such luxury and glory that could raise a sense of respect and humility in every visitor. In constructing the palaces, not only the best materials were provided from all over the empire, but also all the ethnic groups living under the empire cooperated by offering their industries and skills as a sign of interest in unity. 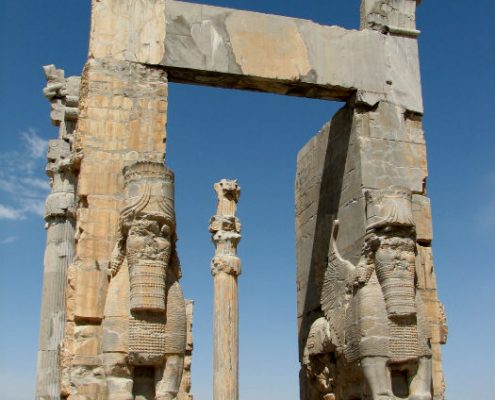 The Gate of All Nation at Persepolis

The entrance gate to the site was originally from the south, through a staircase. To the right of this gate, you can see four cuneiform inscriptions in the name of Darius the Great on a huge block: Two in Old Persian, one in Elamite, and the fourth in Babylonian. These inscriptions informed visitors of the nature of Persepolis, people who contributed to its construction, and the Darius’ beliefs and ideals.

In the following, you can learn more about Achaemenid architecture by passing through different parts of this unique site. They’re as follows:

1. The Gate of All Nations: It was a four-columned square hall with three stone doorways. Two enormous carved winged-bulls are at the inner side of eastern as well as western doorways. The gates are decorated in the upper part with six cuneiform inscription sections. The eastern doorway leads to the Hundred Column Hall, and the southern doorway has a view of the Apadana, the administration hall of the Darius the Great. Xerxes built this gate later to lead the delegations from various nations to enter the site.

2. The Apadana: The audience palace of Darius and the largest building of the site. Its double-reversed stairways are the most splendid parts of Persepolis. The facades of these stairways are decorated by friezes and bear inscriptions of Xerxes. Once there were 72 columns supporting the roof of the palace but today only 13 of them are still standing. 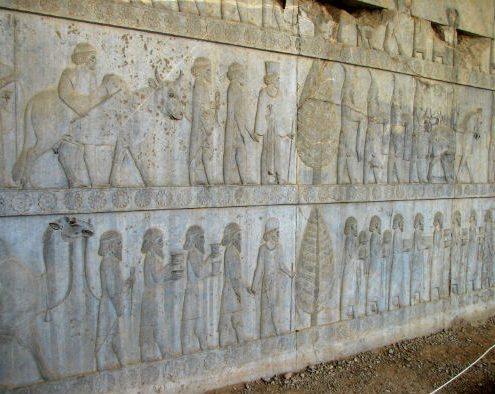 Rock Reliefs on the eastern wall of Apadana palace

3. The Tachara: The private palace of Darius and the oldest one at the site. In this charming structure, you can find three different scripts carved in various historical periods: one in cuneiform from Achaemenid era, one in Pahlavi from Sassanid era, and the other one in modern Persian from Qajar era. Representations of servants and attendants are carved on the inner walls of the stairways, and the façade of the staircase shows two sphinxes, palm trees, and Persian soldiers. 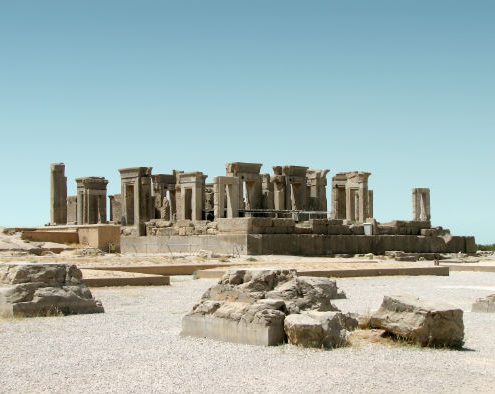 General view of Tachara palace, the private palace of Darius the Great

4. The Harem of Xerxes: A two-wing structure to the west of the Treasury. Here, you can see the largest monoliths at Persepolis in form of two flanking pillars. Building the entire floor of the structure on a natural bedrock, not something man-made, indicates a subtle use of natural space in Achaemenid Architecture. Today, this building is the museum of Persepolis and administrative center of Achaemenid research.

5. The Tripylon or The Central Palace: This small structure, located at the center of the site, must be attributed to Xerxes and Artaxerxes I. Achaemenids have ornamented it lavishly. They had fully engraved its façade. This building was linked to the other palaces by three doorways, a couple of corridors and staircases. They used this building for meetings and consultation with high ranking officials. 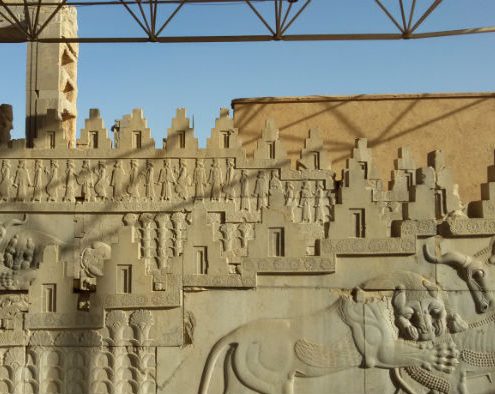 Achaemenid Art at the Central Palace of Persepolis

6. The Hadish: The palace and temporary residence of Xerxes which was twice the size of the Tachara. Its two double reversed staircases are decorated in reliefs. Some parts of the inner façade also show representations of people carrying utensils or leading wild goats or similar animals. You can’t find similar representations anywhere else in Persepolis.

7. The Treasury: built by Darius, extended and formed like a fortress by Xerxes. A thick, mud brick wall has surrounded it leaving only a single entrance at the northeastern corner. This structure accommodated a large part of the huge wealth accumulated by Achaemenid emperors.

8. The Hundred Column Hall: The second largest palace of Persepolis functioned as an audience hall. It’s located to the north of the Treasury and east of the Apadana. The main feature of it was a square hall provided with ten rows of ten columns supporting the ceiling. In fact, Xerxes has built this palace to receive audience from different parts of the empire. 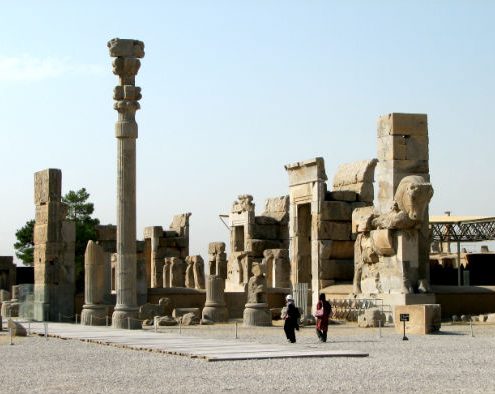 9. Royal Hill: The other monument part of Persepolis are the rock tombs of Artaxerxes III, Artaxerxes II and Darius III beautifully decorated by rock reliefs. These rock tombs are just some of the burial monuments of Achaemenids. They overlook the entire site.

The End of Story for Persepolis

Persians planned and directed the construction of this magnificent palace complex. The best artisans and artists from all the nations under the Persian Empire executed the project. This manifestation of Achaemenid architecture was being extended and maintained until 330 BCE, when Alexander of Macedonia brought its glory to an end by looting and burning it.

By setting Persepolis on fire, Alexander destroyed numerous books and a great part of Achaemenid art and culture. He plundered all gold, silver, and riches of the Persepolis treasury. It was the biggest treasury of Achaemenids.

So far, more than 30000 clay tables have been discovered through excavations of Persepolis most of which in Elamite. They’re the most valuable documents from Achaemenid era in terms of content. They contain important information on payment systems or payment records, work groups, social rights, and materials used in construction of this monument. 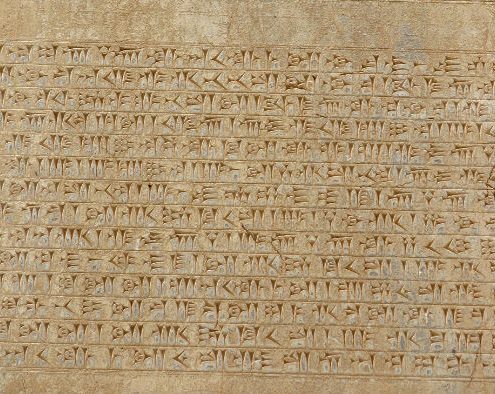 nscriptions of these clay tablets prove that Achaemenids had not used forced labor to construct Persepolis. They had paid all the workers. They also benefited from a kind of labor insurance.

Another discovery is a complex water disposal system with underground channels about 2 km long, and in some parts, up to 5 to 6 m high. Sewage and rainwater was led toward the southeastern corner of the complex to leave it through this drainage system. A sizable well at the foothills is dug and connected to this sewage system that functions like a flash tank to clear the channels and unblock any possible clogged spots.

Administration of the Site 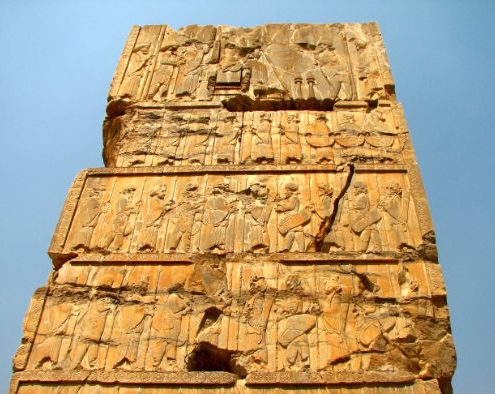 Persian & Median Guards below the Xerxes Throne on Persepolis Walls

What I told you here is just a drop in the bucket. You have to feel the real glory of Persepolis at first hand. I’m sure it will be one of your memorable experiences.

Visit Takht-e Soleyman an Amazing Iranian Archaeological SiteVisit Shapur Cave and Get Hugely Surprised
Scroll to top
Need Help? Chat with us
Start a Conversation
Hi! Click one of our member below to chat on Whatsapp
The team typically replies in a few minutes.
farzaneh
Incoming Department