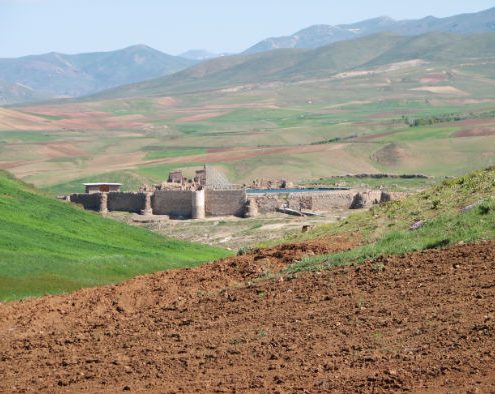 Takht-e Soleyman is an Iranian archaeological site, located 45 km northeast of Takab County in West Azerbaijan province, northwest of Iran. It covers an area of about 124000 sq. m, and the name is Persian equivalent for Solomon’s Throne.

In different historical periods, Medians, Parthians, Sassanids, and Mongols had settled at this area. This historical-cultural complex includes traces of human settlement from the first millennium BC. According to some historians, it has been the birthplace of Zoroaster. UNESCO has approved this monumental complex as World Heritage Site in 2003.

Around the entire site, there is a round fortified platform with the height of about 60 m above the surrounding plains. An artesian lake, a Zoroastrian fire temple, and Anahita temple are located on this platform. There are remarkably interesting points both inside this site and in its vicinity. Here’s a short introduction: 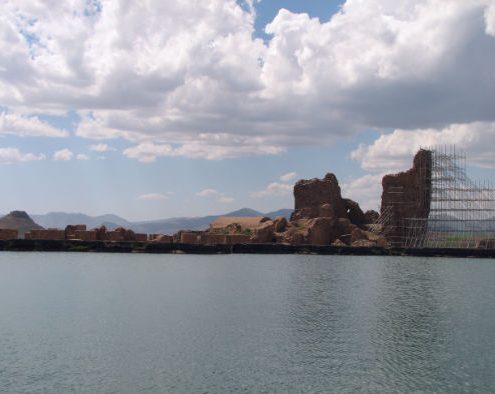 Thousands of years ago it was just a spring. But, during years, sediments from its water raised a wall around the outer edge, and the result is a lake 60 meters deep you can see today. Several streams branch off the lake, which waters surrounding lands.

It was the third principal fire temple for Iranians in Sassanid period, located to the north of the lake, known as Azargoshasb fire temple. The royal family and military commanders had a sole right to worship there. As a symbol of national unity, the government and people of the time highly respected the temple. The fire in it has been a symbol of Zoroastrianism authority for about seven centuries. 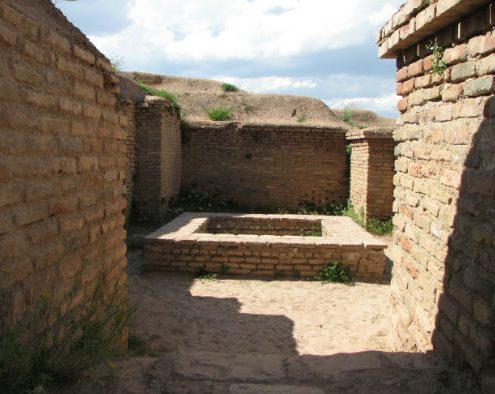 Inside Anahita Temple at Takht-e Soleyman

A temple attributed to Anahita, the goddess of water which is located to the northeast of the lake. People used to praise water in this temple. In some periods it was customary, in time of wars, to throw valuable and precious votive objects to the lake and believed that Anahita would protect them against enemies. So, there is hope for great treasure lying at the lake bed!

There are also two adjacent sites, namely Kooh-e Belgheys (Belgheys Mountain) and Zendan-e Soleyman (Solomon’s Prison). Belgheys was the name of the Queen of Sheba, Solomon’s wife, according to Islamic tradition.

It lies 8 km northeast of Takht-e Soleyman with two peaks of about 3200 and 3655 m high. The citadel and fortifications of Belgheys Throne are located on the southern peak. Fortifications have watchtowers overlooking the region.

At the mountain, you can enjoy the beautiful scene of a lake between the two peaks created by melting snow. It’s a scenic view for most part of the year although in recent years the lake dries up in summers because of low rainfall. It’s a conical hill lying 3 km west of Takht-e Soleyman with the height of about 100 m above the surrounding plains. At the summit of this hill, there’s a deep crater about 60 m in diameter which most likely was filled with water two thousand years ago.

The reason for such naming is local legend which says here is the place in which Solomon imprisoned disobeyed demons. It was a Zoroastrian place of worship and sacrifice in Sassanid era.

Ups and Downs over the Years

This archaeological site was the largest educational, religious, and social center in pre-Islam era in Iran. There are some indications of the earliest settlement during the first millennium around the site. Sometime in the early years of Achaemenid era, The rulers constructed some structures at Takht-e Soleyman. Also, there are some traces showing Parthians had been using the site.

Sassanids constructed a mud-brick wall around the central lake, gates and temples. The site gained its religious importance during this period. Zoroastrian government moved the holy fire to the temple here and called it Azar Goshansb, which turned to be one of the three major temples of Sassanid era. 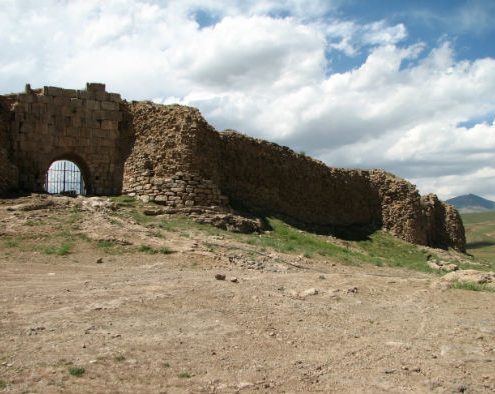 One of the Gateways at Takht-e-Soleyman

But in 624 AD, the Roman Emperor, Heraclius, destroyed it in an attack to Iran. It happened in the reign of Khosrow Parviz, the late Sassanid king.

After the decline of Sassanid Empire and acceptance of Islam by Iranians, this huge complex couldn’t revive again after the severe damages it had received in the war between Iran and Rome .

It went on until 13th century when Abagha Khan, the second Mongol ruler of the Persian Ilkhanid, gave new life to Takht-e Soleyman by doing extensive repairs and construction of new buildings. They used it as the royal summer resort for some time. Most of the construction occurred at the Southern side of the site little of which is remained. In 14th century Mongol princes stopped inhabiting this site and left it.

And as my last word to finish: if you’re interested in mysterious issues, this Iranian archaeological site has remarkable ones to offer, so don’t miss it.

Explore Sheikh Safi al-Din Khangah & Shrine Ensembles in ArdabilGenral View of Part of Persepolis
Scroll to top
Need Help? Chat with us
Start a Conversation
Hi! Click one of our member below to chat on Whatsapp
The team typically replies in a few minutes.
farzaneh
Incoming Department