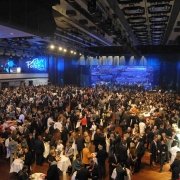 The seventh international Hezar-o Yek Shab (One Thousand One Night) arrived here on Thursday in Shiraz, southern Iran, with 47 international tourists on board.

Tourists come from Germany, Switzerland, Russia, Mexico, Turkey, Finland and Denmark who will complete the tour on April 23 in Tehran.

In Shiraz, passengers from Hezar-o Yek Shab should visit historical and cultural monuments including the Nasir ol-Molk mosque (the pink mosque), the Eram garden, the tombs of Sadi and Hafez, Persepolis, Pasargadae and Naqsh -e Rostam Sites.

It is the 17th international tourist train for visiting Iran since 2014 and the fourth in the last six months.

The train has already visited the cities of Mashad, Yazd and Isfahan.

The Iranian tourism industry has exploded after the establishment of a historic nuclear agreement signed in 2015 between Tehran and the world, six major powers that put an end to severe sanctions imposed on Iran for its peaceful nuclear activities, IRNA said.

Luxury Train Arrives in Iran on Maiden Journey from Russia
Scroll to top
Need Help? Chat with us
Start a Conversation
Hi! Click one of our member below to chat on Whatsapp
The team typically replies in a few minutes.
farzaneh
Incoming Department