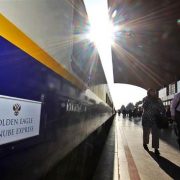 Iran says the luxurious train called the Golden Eagle Trans-Siberian Express has arrived in its northeastern city of Mashhad.

The train which is carrying some 40 international tourists started its journey from Moscow and has already passed through Kazakhstan, Uzbekistan and Turkmenistan.

The tourists are from the UK, the US, Australia, South Africa, France, Taiwan, China and Hong Kong, Russia’s Sputnik news agency earlier reported.

A view of the interior of the “Golden Eagle” train that has just arrived in Iran in a maiden trip that started from Russia.

A foreign tourist having breakfast on board the “Golden Eagle” luxurious train while in Iran.

While in Iran, the train will take the visitors to Iran’s tourism hubs of Kerman, Yazd, Isfahan, and Shiraz. The train is expected in Tehran on 27 November where it will stay for two nights. It will later return to Mashhad and then to Turkmenistan and further on its way back to unwind its 18-day tour. 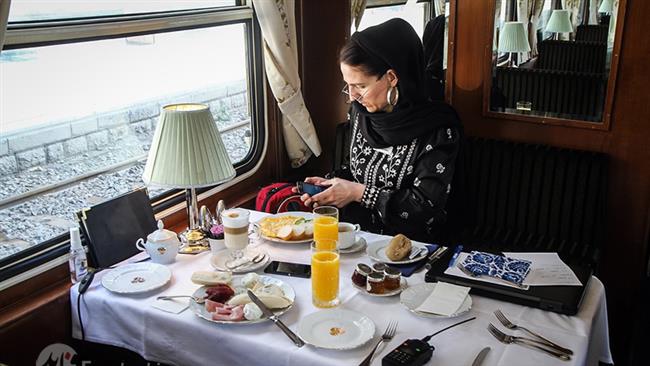 The main route of the Trans-Siberian Express – which is equipped with a 4 to 5 star hotel service – was always through Russia, the Trans-Siberian route, as well as the Silk Road through Central Asia. It represents the first train from Russia to arrive in Iran in decades.

The Trans-Siberian Express had to change the cars and truck wheels, so they fit the Iranian track which has a different gauge of railways than that of Russia.

Tim Littler, the president of Britain’s Golden Eagle Luxury Trains Limited that operates the railway cruise to Iran, had earlier told Sputnik news agency that the luxurious cruise is not a one-time trip. “This is a real active project that will have a permanent schedule of tours,” Littler had said.

“The luxury train from Moscow to the Persian Odyssey will run on a continuous basis. They will go twice a year. In Iran, the best time to go is in spring and autumn. At other times of the year, it is virtually impossible to conduct tours, as it is either very hot or cold. Therefore, we will travel in October and November and in March and April.”

Mamarz Lake | Haunted Body of Water in Northern Iran
Scroll to top
Need Help? Chat with us
Start a Conversation
Hi! Click one of our member below to chat on Whatsapp
The team typically replies in a few minutes.
farzaneh
Incoming Department