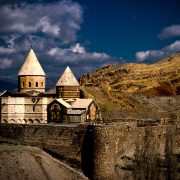 The Memory of Saint Thaddeus and His Faithful Followers

Iran’s Qara Kelisa will honor the memory of Saint Thaddeus and his faithful followers during a ceremony in the northern province of West Azerbaijan.
The church is located at the end of a road which has been constructed merely for this church and a small nearby village. Qara Kelissa was registered as the ninth historical-cultural heritage of Iran at the 32nd International Heritage Committee of the United Nations Educational Scientific and Cultural Organization (UNESCO) in Quebec, Canada.

Scores of Armenians, Assyrians, and Catholics from Iran and other countries will attend the annual event as part of their pilgrimage on the Day of St. Thaddeus.
The ceremony is known as one of the largest religious ceremonies held by Armenians.
Qara Kelisa, also known as the St. Thaddeus Church, is one of the oldest and most notable surviving Christian monuments of Iran that carries great significance for the country’s Armenian Orthodox community.

The church is composed of two parts: a black structure, the original building of the church from which it takes its name and a white structure, the main church, which was added to the original building’s western wing in 1810 CE.
An ancient chapel two kilometers northwest of the church is said to have been the place where the first Christian woman, Sandokh, was martyred. The chapel is believed to be as old as Qara Kelisa. The structure was inscribed along with two other monastic ensembles of the Armenian Christian faith namely St. Stepanos and the Chapel of Dzordzor.

Saint Thaddeus Monastery
The Saint Thaddeus Monastery is an ancient Armenian monastery located in the mountainous area of Iran’s West Azarbaijan Province, about 20 kilometers from the town of Maku. The monastery is visible from a distance because of the massiveness of the church, strongly characterized by the polygonal drums and conical roofs of its two domes. There are several chapels nearby: three on the hills east of the stream, one approximately 3km south of the monastery on the road to Bastam, and another that serves as the church for the village of Ghara-Kilise.
One of the 12 Apostles, St. Thaddeus, also known as Saint Jude, (not to be confused with Judas Iscariot), was martyred while spreading the Gospel. He is revered as an apostle of the Armenian Apostolic Church. Legend has it that a church dedicated to him was first built on the present site in AD 68.
Not much appears to remain of the original church, which was extensively rebuilt in 1329 after an earthquake damaged the structure in 1319. Nevertheless, some of the parts surrounding the altar apse date from the 10th century.
Most of the present structure dates from the early 19th century when Qajar prince Abbas Mirza helped in renovations and repairs. The 19th-century additions are from carved sandstone. The earliest parts are of black and white stone, hence its Turkish name Kara Kilise, the Black Church. A fortified wall surrounds the church and its now-abandoned monastery buildings.

According to Armenian Church tradition, the Apostles Thaddeus and Bartholomew traveled through Armenia in AD 45 to preach the word of God; many people were converted and numerous secret Christian communities were established there.
The ancient Christian historian Moses of Khorene tell the following story, considered a legend by most modern historiography.
Thaddeus converted King Abgar V of Edessa. After his death, the Armenian kingdom was split into two parts. His son Ananun crowned himself in Edessa, while his nephew Sanatruk ruled in Armenia. About AD 66, Ananun gave the order to kill St. Thaddeus in Edessa. The king’s daughter Sandokht, who had converted to Christianity, was martyred with Thaddeus. Her tomb is said to be located near the Ghara Kelisa.

History and Architecture
In Turkish, Qara means black and the church was called so because a part of it was black. Apparently, the main building of the church was built entirely of black stones but after reconstruction part of the stones was replaced by white ones. This was most probably done intentionally so that future generations would be informed of the original shape and façade of the church.
The church was destroyed and reconstructed at different eras for different reasons. A great part of the church was destroyed in the year 1230 (616 Lunar Hejira) during the attack of Genghis Khan.
When Hulagu Khan was residing in Azarbaijan, Khaje Nassireddin Toosi embarked on its reconstruction.
The main church, built in 1811-1820 is a massive structure, built of light sandstone and adorned with blind arches and decorative and geometric shapes.
Its twelve-sided tambour has been built in alternating light- and dark-colored stones and has an equal number of windows.
The church has two large courtyards, the first of which seems to have been used for agricultural purposes, while the second encircles the white structure, the portico, and a number of rooms.
The first courtyard includes oil-extracting rooms, a miniature windmill, an oven, and a fountain. It is decorated with ornamental motifs and two intricately designed stone crucifixes.
A small door opens to the second courtyard where the refectory and the kitchen along with rooms for resident monks and abbots are located.

The portico, which has been left unfinished, dates back to the mid 19th century.
The building’s exterior is adorned with five rows of alternating dark and light stones as well as numerous round and blind arches, decorated with rosettes, coats-of-arms, flowers and animal figures.
Statues of angels adorn the front facade of the church and its northern and southern facades are decorated with dark-colored stone crucifixes.
Sculptured bas-reliefs bearing passages from the Old and New Testaments, mythical animals, and effigies of saints have added to the beauty of the monument.
Armenians hold that Qara Kelisa is the world’s first church and was constructed in 68 CE by one of the apostles of Jesus, Saint Thaddeus, who traveled to Armenia, then part of the Persian Empire, to preach the teachings of Christ.
The church was destroyed as a result of an earthquake in 1319 and as narrated by Andranik Hovian there is a document showing it was rehabilitated by Saint Zachary in 1329.