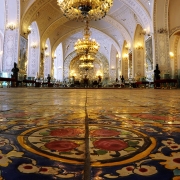 Many scholars have different divisions from literary places.But many of them believe that tourism places are in three main categories:

1-Real places: These places are directly linked to the writer’s life.These places are very attractive for enthusiasts of literature, For example, visiting the work table, where their favorite writer wrote survival effects, create a great feeling for them.The place of residence, burial place or birth place are other real places.For example, Shahriyar’s house in Tabriz and Nima’s house in Yosh-Mazandaran, the tomb of Hafez, Saadi, Ferdowsi and others. . .

2-Imaginary Places: These places are somewhat fanciful and relate to the spaces of novels, poem, and plays.

3-Fictitious Places: These places are built with the attention to literary spaces to attract tourists.Dickens World, Chatham, Stratford, that can see the facilities with the theme of Shakespeare’s works.

Top 10 Literary Destinations
Literature in pre-Islamic Iran goes back to the Avesta poems around 1000 BC.These poems, which were part of the ancient Iranian tradition of oral tradition, were shifted chest to chest, and later they created parts of the Avesta book during the Sassanid era.Persian classical literature was created during the first era of Islam in Iran under the rule of the Arabs.The Iranian people’s attention to culture and art has led to the emergence of very famous poets in Iranian literary history.With this long history in the literary history of the world, unfortunately, Iran does not have a good Position among literary tourists.
Discover the top 10 literary destinations, unfortunately, Iran does not have a special place.

1- London: Tomb of Geoffrey Chaucer and John Milton
2- Stratford: Shakespeare’s Birthplace.
3- Edinburgh: The home of writers or important literary figures of the world, Sherlock Holmes Or Harry Potter.
4- Dublin-Ireland: writers such as James Joyce.
5- New York: Rebecca Miller.
6- Massachusetts: With the reputation of the book &quot; Small Women”Louisa May Alcott’s Orchard House”
7- Paris: With Victor Hugo & Alexandre Dumas And bookstores along the Sen River and Cafe Books.
8- San Francisco: Due to the immigration of some writers such as Allen Ginsberg.
9- Rome: with the characters of the ancient world, to contemporary artists “Kites”, “Shelley” and “James.”
10- St. Petersburg: With Tolstoy, Chekhov, Pushkin, and Dostoyevsky.

–  One billion US dollar revenue per year from literary tourism.
About 118 million American readers spend on average $ 994 per trip, generating more than $ 192 million a year for the US economy.

The Memory of Saint Thaddeus and His Faithful Followers in Iran
Scroll to top
Need Help? Chat with us
Start a Conversation
Hi! Click one of our member below to chat on Whatsapp
The team typically replies in a few minutes.
farzaneh
Incoming Department