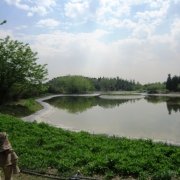 Iran (also known as Persia) is one of the biggest countries in South-west Asia covering an area of 1.6 million km². Iran is the 18th largest country in the world which roughly equals that of the United Kingdom, France, Spain, and Germany combined, or somewhat more than the US state of Alaska. Iran is mountainous, about 52 % of the country area consists of mountains and deserts and more than half of the country is at altitudes between 1 000–2 000 m and 16% is above 2 000 m with some mountains of 3 000–4 000 m. Damavand Mount at 5 610 m is the highest in west Asia and Europe. Some 11 000 km2 equal to 0.9% of the land at the Caspian Sea coast is below sea level. The mean altitude is over 1 200 m above sea level. The lowest inland point is in ChaleLut, 56 m below sea level.
The climate of Iran is one of great extremes due to its geographic location and varied topography. The summer is extremely hot in some places with temperatures in the interior rising possibly higher than anywhere else in the world; certainly over 70°C has been recorded (in Lut Desert). In winter, however, the great altitude of much of the country and its continental situation result in far lower temperatures than one would expect to find in a country in such low latitudes. Minus 30°C can be recorded in the north-west and minus 20°C is common in many places. Topography generally affects climate and soils and plays a considerable role in the differentiation and distribution of climates and vegetation zones. For example, the Caspian zone is humid, due to the high Alborz mountain range. In the Sefid-Rud valley as a result of the low altitude, dry winds from the interior move towards Guilan, creating an area of low rainfall which extends up to some 40 km from Rasht (Capital of Guilan Province). The great chain of Albors and Zagros forms a “V shaped” natural barrier which inhibits the humid winds of the south-west and prevents the majority of clouds from reaching the center of the country, so steppes and deserts are created. Due to the great variations in altitude in mountainous regions, quite different types of vegetation are found over relatively short distances from one another, a factor which encourages the seasonal flock movement. The most outstanding feature in the topography of the Central Plateau is its microrelief which is the outcome of a series of geomorphologic processes, such as erosion, drainage, and peneplanization, which are still in full action. This has led to differentiation of the plateau into a series of habitats that differ from each other in the physical and chemical properties of their soils including salt-moisture relations. This series starts from the foot of each mountain ridge or block and ends in the deepest depressions of the alluvial basins. The rocky slopes of the ridges are often bare or very poorly vegetated.Due to its topographical, climatic and particularly its lithologic diversity, Iran displays a rich mosaic of soils.
Iran has a diverse nature from the Persian Gulf in the South to the coasts of the Caspian see in the North, from central deserts to the Mountains of Alborz and Zagross. These provide us an opportunity to explore the marine or terrestrial plants from different parts of Iran.
Based on geography, Iran is located in special area with several different geographic regions including:
i) Caspian Zone (Caucasian and mid- European affinities, slightly Medi-terranean on the coast). Annual precipitation between 600 and 2 000 mm with a minimum in June but no real drought, maximum in autumn.
ii) Baluchi Zone (Saharo-Sindian and subtropical affinities). Annual precipitation below 300 mm (generally less than 200 mm) almost entirely in winter (six to eight months without precipitation), but high relative humidity (60% to 80%).
iii) Irano-Turanian Zone (slight Medi-terranean affinities). Extremely variable precipitation, generally between 100 and 500 mm; maximum in winter or spring. At least three summer months of total drought extending up to nine months in the most arid regions.
iv) High mountain zone: It is very difficult to give details of the climates of high mountains, as these climates are probably very different according to their northern, eastern or western aspect.
The Irano-Turanian flora covers more than 85% of the country. It is very well characterized by the frequency and richness in species of numerous genera, in particular the genus Astragalus(at least 600 species); the genera: Cousinia(more than 200 species), Silene(more than 100), Allium (approximately 90), Euphorbia, Nepeta, Acantholimon(roughly 80 species), Onobrychis, Salvia, Centaurea(approximately 70 species), etc. Among other genera less rich in species, but present in the greatest part of the Irano-Turanian zone, are: Acanthophyllum, Artemisia, Stipa, Phlomis, Stachys, Achillea, Bromus, Poa, Agropyron, Hordeum, Scrophularia, Eremurus, Echinops, Ephedra, Trigonella, Convolvolus, Alyssum, etc

Malek historic mansion | The Malek House
Scroll to top
Need Help? Chat with us
Start a Conversation
Hi! Click one of our member below to chat on Whatsapp
The team typically replies in a few minutes.
farzaneh
Incoming Department