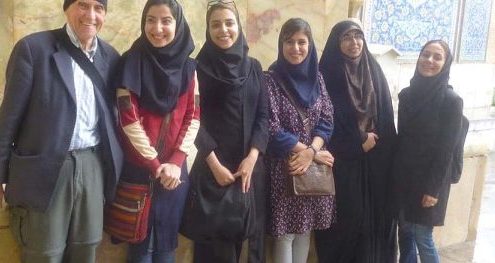 I’m Philadelphia Inquirer, and I’ve had a trip to Iran.I studied for many years about Iran’s rich history and I was eager to see its wonders.But when I told my friends that I was planning to travel to Iran, ..They told me, You are crazy! Because they believed that Iran was not safe and its people were hostile to Americans.But that was not true. I traveled to Iran and the friendly welcome of the people reflected the beauty of Persian culture.I started my 11-day trip to Iran from the ancient city of Persepolis, where 3,000-year-old palaces and gateways built by Xerxes and Darius the Great still stand.Although the city was looted and partially destroyed by Alexander the Great in 331 B.C., many of the original structures remain in a somewhat diminished but rehabilitated form. Persepolis, now a UNESCO World Heritage Site, lay dormant for centuries until the 1930s, when restoration efforts began. Although it is the chief tourist attraction in Iran, it is only one of many joys I experienced.

I traveled to 10 Iranian cities in total.A trip that started from Shiraz in the south and ended up in Tehran.The weather in most places in April was fairly good and made touring enjoyable.There were some inconveniences along the way: no ATMs, no credit-card charges, and no use of U.S. dollars. However, I adapt.

My favorite cities were Yazd and Isfahan.The city of Yazd, near the central desert of Iran, is one of the oldest cities in the world.Quaint narrow streets included 2,000-year-old houses, making it fascinating to wander and explore, especially for someone who spent his childhood in Swampoodle.

Isfahan as one of the most important tourist cities in Iran is very beautiful.Nice bridges over the ZayandehRood (River) , beautiful mosques, great palaces and magnificent mosques in Isfahan attention by all tourists.

The trip’s highlights were the bazaars, the mosques, and the people. Every town has at least one bazaar where it seems one could walk forever under cover with shops on either side selling almost everything. Bazaars are the Iranian version of American shopping malls – without endless parking lots wasting space.
Resplendent in their beautiful architecture and breathtaking interiors, the mosques mesmerized me. I visited as many as I could. My favorite was Cheragh in Shiraz, with its gold-topped minarets and mirrored tiles on interior walls.

As for the people, many speak English and love talking with and posing for photos with Americans. I posed with as many as I could. Three encounters heightened my impressions of the many people I met:

One evening, when I wandered around, I followed a local synagogue in Isfahan, A man in English asked if he could help me?When I told him my destination, he took me across the street to a plain building that housed the synagogue, rang the bell, and explained in Farsi over the intercom that I was eager to see the interior.

One night in Tehran, my camera battery was running low, and I didn’t have my charger.An English-speaking man in a camera shop said he had no chargers for my camera, but he offered to charge my battery on his shop’s machine. We chatted for 20 minutes while the battery charged at no cost to me.

When I returned from Iran, my driver took me to Tehran airport, he also helped me to carry my luggage inside.

My Iran trip was one of my most enjoyable adventures in all of my travels.

Why Traveling in Iran Is the Journey of Your LifeIran from the perspective of an American woman tourist
Scroll to top
Need Help? Chat with us
Start a Conversation
Hi! Click one of our member below to chat on Whatsapp
The team typically replies in a few minutes.
farzaneh
Incoming Department