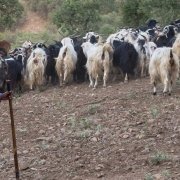 Kerri-Ann Smith:  Our three days traveling with Nomad. Tours in the Zagros Mountains was a highlight of our recent trip to Iran. We experienced firsthand the world of the Bakhtiari nomads and the stunning natural wonders of the high ranges. Here, perhaps a million people live a nomadic pastoral lifestyle, moving between summer and winter camps with their flocks of goats and sheep.

Out of Shar-e-Kord, the bitumen soon gave way to dirt road that unraveled across green ridges. Like a child’s drawing of mountains, a zigzag line of remnant snow formed white triangles on grey pyramids. Being late May, the lower altitudes were already sweltering in the heat haze of the high 30s and the nomads had reached their cooler summer camps.  Occasional black goat hair tents and simple stone structures covered with boughs and tarps appeared on the hillsides.

Along the way, we enjoyed a picnic lunch cooled by a fine mist floating from a 30-metre waterfall. We traveled through villages of flat-roofed stone houses where some nomads have settled over the last century.  Our guides quickly became our friends as we talked and they shared their knowledge of the area, its people and the issues facing them. 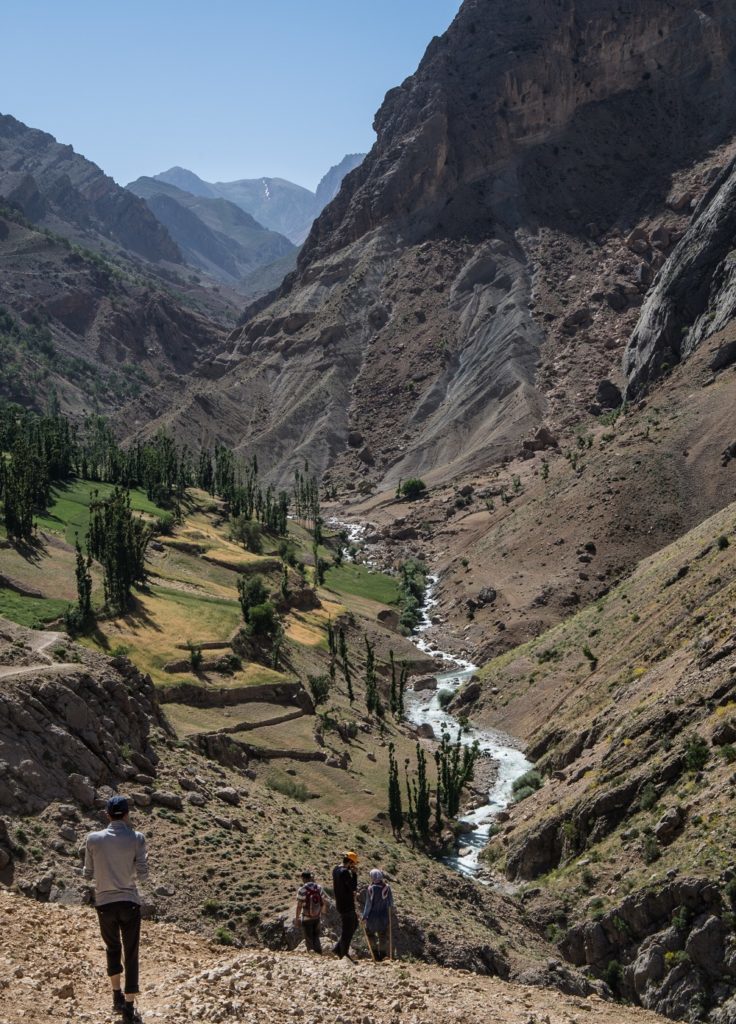 Later, we were welcomed at a camp to experience a nomad family’s typical day. Their lives are dominated by the care and use of their animals – meat, milk products, and wool. It’s raw and unrefined. It’s physically hard. Women in long, brightly-colored and multi-layered dresses poured milk from the afternoon’s milking into large pans for boiling. A hapless goat was selected from the herd and was led away. A gaggle of smiling children giggled as we swapped words: “goat” – “boz”, “milk” – “sheer”. The Bakhtiari speak a Lorish dialect as well as Farsi.

Later, by firelight, we ate succulent fresh goat kebabs and stew. A blackened teapot sat on the fire; the glasses of tea were filled many times. For hours we chatted and ate with the men. The women worked and ate separately. We slept where we ate, under the woven goat hair tent.

The culture and traditions of the Bakhtiari nomads are under pressure from government settlement policy; the need for better access to health, education and employment; and the simple desire for a more comfortable life. Some years ago, the patriarch Assad Allah had sold off the family’s flocks and moved them all into a village. But, unhappy there, he returned to his nomadic roots, bringing his wife, Batool, and many of their four daughters and four sons and their husbands, wives and children. 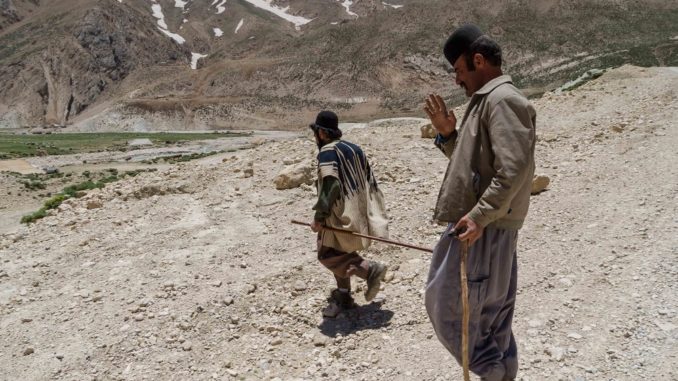 The chores were underway at dawn. Two men headed out with a rifle, but returned empty-handed. In a branch enclosure, the younger women caught and milked the goats before they could dart for the exit. One boy set out for a three hour walk to school to sit an exam. Then, as the sun crept higher in the sky, we accompanied one young shepherd and his flock of goats and fat-tailed sheep over rocky ridges in search of good grazing.

Some of the women headed out on their daily 2-3 hour walk to collect water from a spring. When slaughtered, animal hides are carefully preserved intact to become water receptacles and butter churns. Batool started the hours of rhythmic churning needed to turn milk into butter. Hung from a sturdy wooden tripod and decorated with colorful pom poms, skins filled with milk are rocked vigorously and left to hang.

While we could have stayed for much longer, we said goodbye and continued our journey through the mountains, visiting villages and seeing the handicrafts of the local people. Along the way, we gave lifts in our truck to a mother seeking medical help for her child and to two men wanting to visit their cousins in a camp further downriver. Hospitality and generosity is given and expected. A way of life. 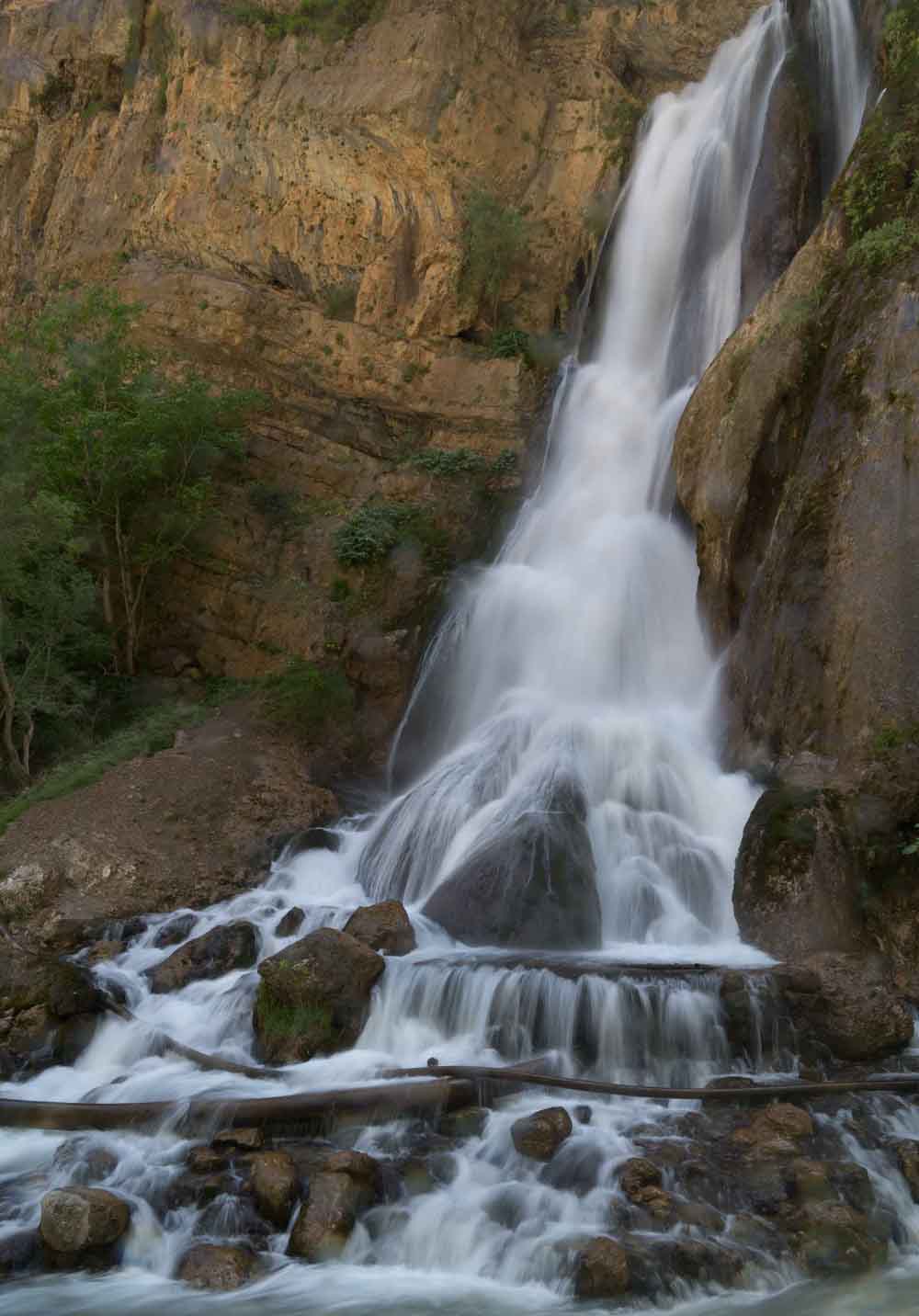 Our last overnight stay was at Sar-Aqa-Seyyed, a stepped village yet to be discovered by tourism, where the roof of each house forms the verandah of the one above, grasses are tossed with wooden forks and villagers share common toilets along the creek. From there we walked part of a nomadic route along a steep-sided gorge and visited a salt mine worked in the summer by local women. Our last main stop before heading back to Isfahan was the majestic Koohrang spring where millions of liters of water gush from a slit in a cliff before roaring off as a large river.

‘Authentic’ is a ridiculously overused word to describe experiences. But here, it could not be more appropriate. Be ready to be awed.

Why you’re wrong about Iran, things I learned cycling around the world
Scroll to top
Need Help? Chat with us
Start a Conversation
Hi! Click one of our member below to chat on Whatsapp
The team typically replies in a few minutes.
farzaneh
Incoming Department