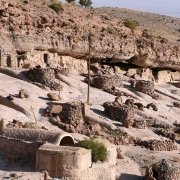 Man and nature joined together to create one of the most amazing and extraordinary places in the world in southern Iran.
Meymand is a rocky village in the district of Meymand in the central part of the city of Babak in the province of Kerman in southeastern Iran.
Meymand dates back to 8,000 to 12,000 years, is another example of the historic tourist attraction in Iran.
The village of Meymand and the Kandovan rocky village in Tabriz are among the few architectural forms of the rock that are widely used in the entire structure of the villages.

As an example, the most important attributes of these villages in comparison with those of the Cappadocia village of Turkey are the residential units of these two villages.In other words, life is still in this village.
The village was registered on July 4, 2015, at the thirty-nine UNESCO World Heritage Summit as the 19th UNESCO World Herald of Iran.
Meymand Village attracts thousands of tourists eager to see its cavern-like houses and experience the traditional rural culture of the region.
This ancient man-made building is certainly among the first human settlements in Iran.It is not yet known who created this collection, and what were the motives of these people for the construction of such structures.
But the motives of the people are very important,Because with simple facilities, the creation of such magnificent collection with an outstanding architecture is admired.

Some people believe that Mithraism used these caves only for the worship and burial of the dead.And after a while due to the emergence of water and air or any other effective environment, these caves have been chosen to reside.The religion of Mithraism was prevalent in Iran before the advent of Ayn Zoroastrianism and continued until long after its emergence.
At the time of Sasanian, Shahrbabak was considered as the birthplace of Babak Sassanid.After the advent of Islam and its entry into Iran, the people of Meymand who believed in the Zoroastrian religion accepted Islam.

Traditional houses in the village are carved out of the rocks and include corridors, pillars and a stove used to cook and heat the house during glacial winters.Locals say their ancestors did not use hammers and scissors, but a type of pointed stone to sculpt images in rocks. The method is still practiced today in the region.
The current inhabitants of the village build their cave houses, known as Kicheh, by chiseling six to nine-meter horizontal cuts into the hillside’s soft sedimentary rock.Meymand’s sedimentary rocks are soft enough to be shaped by hand and hard enough to support the roof of cave units.
There are about 400 Kitchens in Meymand. Each Kicheh covers an area of about 16 to 20 square meters and is nearly two meters high.

The houses are built on one another and accommodate 130 to 150 people, many of whom lead a nomadic life, escaping warm weather by switching to higher pastures in summer.
The houses usually consist of a single square or round room with carved windows as much as possible. Some houses are windowless and dark due to lack of natural light and soot-coated walls.

Larger houses have more than one room and sometimes an adjacent shelter or animal shelter. The doors are generally rectangular and wooden, with a latch that locks on a hole drilled in a stone frame.
Tourists, who arrive in the village can either stay in guest houses or enjoy staying in cozy, soot-stained cave houses.Guest house rooms are covered with pressed wool felt, called Namad in Persian, and carpets.Meymand also has a public bath, a school, a restaurant, a museum and a number of shops mostly offering herbal medicine and traditional handicrafts.

10 tips for vacationers in Isfahan

The American citizens’ commute to Iran isn’t stopped
Scroll to top
Need Help? Chat with us
Start a Conversation
Hi! Click one of our member below to chat on Whatsapp
The team typically replies in a few minutes.
farzaneh
Incoming Department